The Purpose of Mucus, the Body’s Unsung Hero 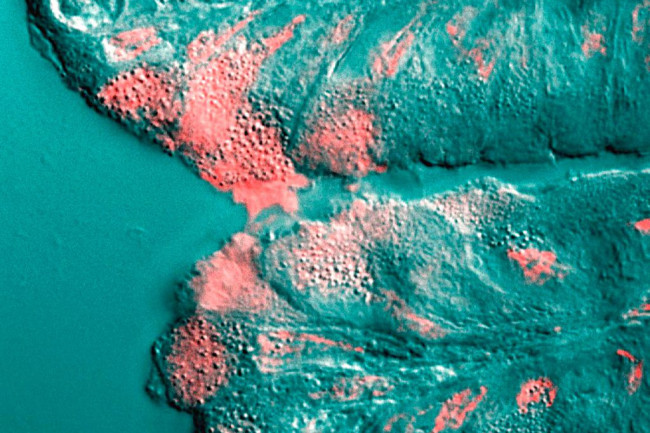 This is really interesting as our knowledge has improved hugely in understanding just what is going on.

It also helps explain symptoms that we experience as well. turns out to be complex and effective.

The Purpose of Mucus, the Body’s Unsung Hero

Gross as it may be, we should be thankful for our mucus.

Mucus (shown in pink) is secreted by a cell in the stomach. (Credit: Underwood 2006 PLoS Biology)

We know it best as a stringy slime dripping from noses and as viscous, discolored goop hacked up by sickened airways. But it’s so much more than that. Coating the surfaces of guts, eyes, mouth, nasal cavity and ears, mucus plays a range of important physiological roles — hydrating, cleaning, supporting good microbes and warding off foreign invaders.

“I like to call it the unsung hero of the body — it’s something that has such powerful effects over our health,” says Katharina Ribbeck, a biophysicist at MIT who with colleagues outlined the many roles of mucus in the 2018 Annual Review of Cell and Developmental Biology. Most of those functions come from the 5 percent of the substance that’s not water: various salts, lipids and proteins, most notably mucins, which give mucus its gel-like qualities — long, thread-like polypeptides coated in covalently bound chains of sugars called glycans.

Scientists have uncovered many ways that mucin proteins work to keep body surfaces clean and protected, and are continuing to parse the complex interactions the molecules have with microbes. Here’s some of what they’ve learned so far, and where the research is heading.

A Multitude of Mucins

Mucosal coatings vary considerably across the body, in line with needed functions. The eye, for example, is covered with a thin film of not especially viscous mucus, sufficient to keep it hydrated. The inside of the colon, in contrast, bears a thick, gummy coating that stops bacteria from sneaking through.

Key to these physical properties are the mucins themselves. Produced by specialized cells in tissues that line bodily cavities and surfaces, they are some of the biggest molecules we make and come in two main flavors: secreted mucins, which are exuded to form large, mesh-like networks, and tethered mucins, which remain latched onto cells.

Mucin manufacture changes with place and circumstance. “There’s a lot of cell specificity,” says biophysicist Brian Button of the University of North Carolina School of Medicine. For example, the gel-like mucus that keeps the respiratory tract clean is made up of the secreted mucins MUC5B and MUC5AC. Usually, MUC5B is dominant — a 2017 analysis in the New England Journal of Medicine found it to be about 10 times more abundant than MUC5AC, for example. But during infections and certain other medical conditions, levels of MUC5AC rise steeply, creating a much more tenacious, sticky mucus that’s harder to clear from airways.

More MUC5AC can be good, because the goopier mucus prevents bacteria from adhering to body cells and causing harm, Button says. But in conditions such as asthma, cystic fibrosis and chronic obstructive pulmonary disease, MUC5AC overproduction can cause a harmful buildup of mucus in the airways.

In other parts of the body, such as the stomach, high levels of MUC5AC are standard and help to protect the lining from acidic digestive juices. And in the intestine, yet another mucin — MUC2 — is the main player. In the colon, MUC2 forms two layers of mucus — a loose outer lining that houses bacteria and a densely packed inner barrier that keeps those microorganisms from penetrating the cells of the tissue underneath. Unlike the airways, “in the intestine, you really don’t have a problem with too much,” says Gunnar Hansson, a mucin biologist at the University of Gothenburg in Sweden. “You’d rather have too much than too little.” 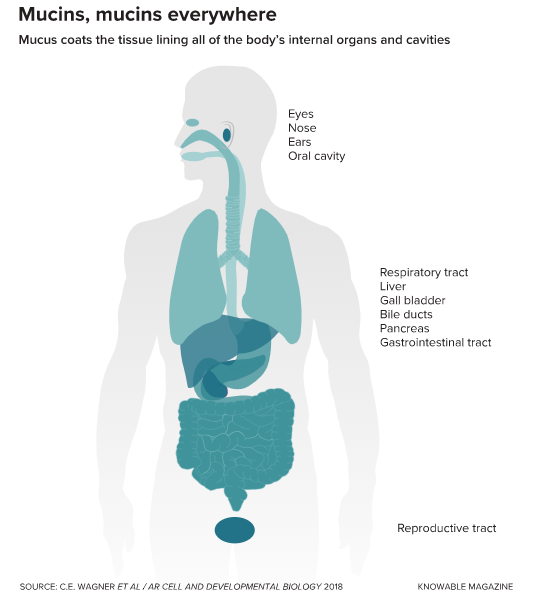 Today there’s increasing appreciation that the trillions of microbes that live in our intestines — the gut microbiome — play vital roles in health and disease. And where do they live? In layers of nurturing mucus. In fact, it’s become clear that many of these commensal bacteria use the glycans studding mucin molecules as a primary source of energy. To that end, their genomes carry codes for enzymes that can cleave these carbohydrates and digest them.

The bacteria also release metabolites such as the short-chain fatty acid butyrate that gut cells use to fuel yet more mucin production. “They are using the energy to feed themselves, but they are also producing energy that they’re sending back to us . . . and making it possible to make these large amounts of mucins,” Hansson says. “They benefit from this, and we benefit from it as well.”

Unlike our guts’ natural denizens, bacterial pathogens tend to lack the machinery needed to take advantage of the glycans on mucins, and have developed other ways to expand their populations. 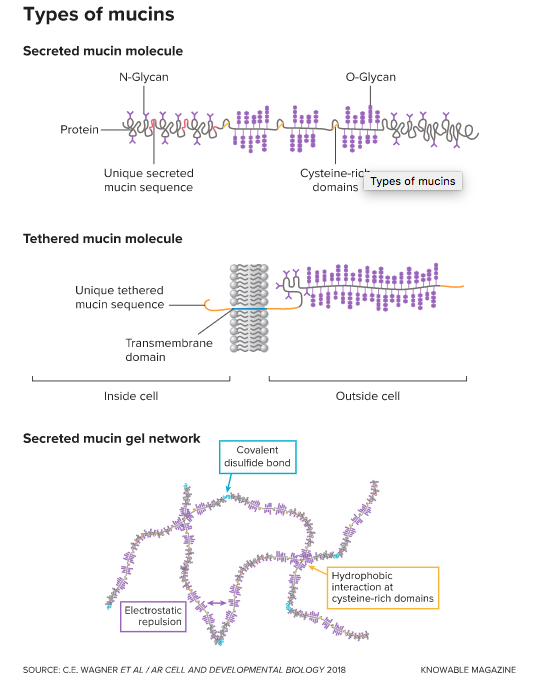 Mucins come in two main flavors: Some are tethered to cell membranes and others are secreted into the surroundings. In both types, a protein backbone is studded with strings of sugars called glycans that are linked to either the amino acid asparagine (N-Glycans) or to the amino acids serine and threonine (O-Glycans). Secreted mucins form networks by linking together: Covalent disulfide bonds may attach them end-to-end and reversible links can form between cysteine-rich regions. Electrostatic repulsion between the negatively charged glycans stabilizes the mucin networks.

Mucins do more than serve as physical barriers and microbe food. Scientists have discovered that the glycans decorating the surface of these molecules can influence the behavior and physiology of pathogenic microbes and reduce their ability to spread and cause harm.

In a 2012 study in Current Biology, for example, Ribbeck and her colleagues discovered in test tube experiments that mucins could stop the bacterium Pseudomonas aeruginosa, the cause of many dangerous hospital-acquired infections, from forming biofilms — tight-knit microbial communities that are hard to eradicate. Ribbeck’s lab later showed that mucins could prevent biofilms of other pathogens from forming, including those of Streptococcus mutans, the bacterium responsible for tooth decay.

In addition to reining in foreign invaders, mucins can also help keep our body’s resident microbes in check. Ribbeck’s team found that the molecules quash the transition of Candida albicans, a fungus that normally resides peacefully within the healthy microbiome, to a pathogenic form. They do so by suppressing Candida’s ability to form filaments, attach to surfaces and develop other traits that enable it to cause harm.

Mucins can also act as decoys to prevent infection. In 2009, Mike McGuckin, a molecular biologist at the University of Melbourne in Australia, and his colleagues reported in PLOS Pathogens that when Helicobacter pylori, a bacterium that can cause peptic ulcers and gastric cancer, tries to bind a cell on the surface of the stomach, a mucin can attach to the pathogen instead. The mucin then detaches from the membrane of the cell, carrying the would-be invader along with it into the acidic gastric juice. “A lot of bacteria and viruses recognize certain sugars on the cell surface, and that’s how they know they’re getting to the cell,” Button explains. “Mucins can replicate those glycosylation patterns and act kind of like molecular decoys.” 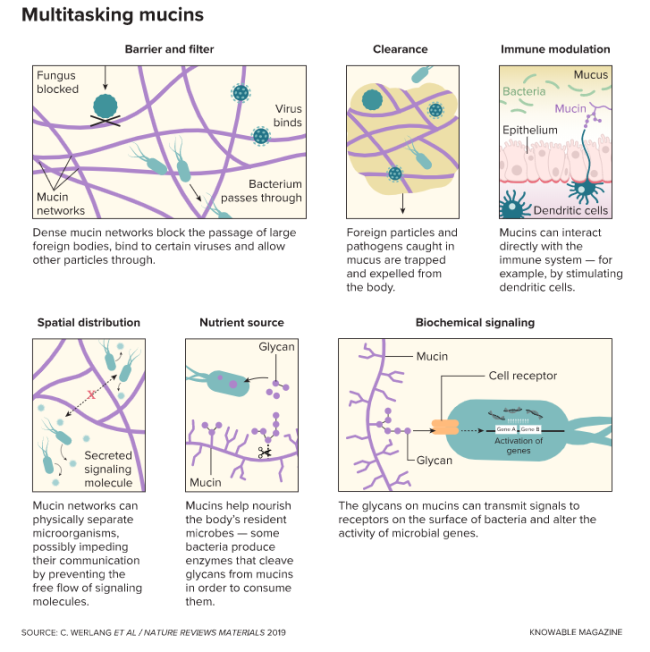 Mucins come in two main flavors: Some are tethered to cell membranes and others are secreted into the surroundings. In both types, a protein backbone is studded with strings of sugars called glycans that are linked to either the amino acid asparagine (N-Glycans) or to the amino acids serine and threonine (O-Glycans). Secreted mucins form networks by linking together: Covalent disulfide bonds may attach them end-to-end and reversible links can form between cysteine-rich regions. Electrostatic repulsion between the negatively charged glycans stabilizes the mucin networks.

But some disease-causing bacteria use mucins to their advantage. In another study, McGuckin and colleagues demonstrated that Campylobacter jejuni, a microbe that lives harmlessly in chickens but can cause food poisoning in people, recognizes human mucins and uses their presence as a cue to ramp up the activity of genes involved in pathogenicity.

“There are lots of examples where a bacterium is non-pathogenic in one species but can be pathogenic in another species — and a lot of that will relate to mucins,” says McGuckin. “The same is true for viruses.”

Scientists hope to one day create synthetic mucins for both research and treatment and have put quite a bit of work into developing tissue culture for their production. But it’ll take better understanding of the molecules’ structure and biophysical properties before synthetic substitutes become a clinical reality, says molecular biologist Christopher Evans of the University of Colorado at Denver, who is working with colleagues to tease apart some of those details.

Once that’s done, synthetic mucins could be used in lab studies and, eventually, for health care applications such as controlling problematic pathogens, restoring damaged or defective mucus linings, and improving drug delivery by creating coatings that can bypass mucosal barriers.

And Ribbeck sees still more potential uses: Synthetic mucins might replace antibiotics in animal feed, say, or manage microbial communities to aid in the growth of crops. “The applications could go far beyond health care,” she says.

Diana Kwon is a freelance science journalist who covers health and the life sciences. Follow her on Twitter @DianaMKwon.

This article originally appeared in Knowable Magazine, an independent journalist
Posted by arclein at 12:00 AM