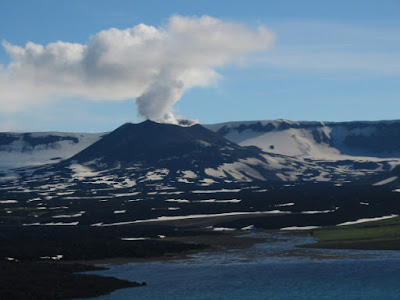 This is at least one known confirmation of climatic impact by  volcanism.  I do think that these events are much more common than understood and very effective.  By the way the photo shows a possible crater edge in the background.

If true, then cubic  miles  of ash hit the Northern Hemisphere.

I do think that eruptions in Iceland has been making Northern Europe dance as well.  However Okmok lasted for almost a decade which is much larger than the big one we had in Indonesia some two centuries ago.

The assassination of Julius Caesar on the Ides of March in 44 B.C.E. triggered a 17-year power struggle that ultimately ended the Roman Republic leading to the rise of the Roman Empire. To the south, Egypt, which Cleopatra was attempting to restore as a major power in the Eastern Mediterranean, was shook by Nile flood failures, famine, and disease. These events are among the best known and important political transitions in the history of western civilization. A new study reveals the role climate change played in these ancient events.

An international team of researchers, including Yale's Joe Manning, used historical accounts and climate proxy records -- natural preservers of an environment's history (such as ice cores) -- to uncover evidence that the eruption of Alaska's Okmok volcano in 43 B.C.E. caused global climatic changes that sparked the period's political and social unrest and ultimately changed the course of ancient history. The research was published June 22 in the journal Proceedings of the National Academy of Sciences.

The interdisciplinary team analyzed volcanic fallout records in six Arctic ice cores, and found that the largest volcanic eruption in the northern Hemisphere of the past 2,500 years occurred in early 43 B.C.E. The researchers found that the geochemistry of tephra -- rock fragments and particles ejected by a volcanic eruption -- originated from the Okmok volcano in Alaska. Climate proxy records show that 43 and 42 B.C.E. were among the coldest years of the recent millennia in the Northern Hemisphere at the start of one of the coldest decades. Further research suggested that this high-latitude eruption led to pronounced changes in hydroclimate, including colder seasonal temperatures in specific Mediterranean regions during the two-year period following the eruption.

The team synchronized these scientific findings with written and archaeological sources from the period, which described unusual climate, crop failures, famine, disease, and unrest in the Mediterranean immediately following the eruption -- suggesting, Manning said, that the otherwise sophisticated and powerful ancient states were significantly vulnerable to these climatic shocks from a volcanic eruption located on the opposite side of the earth.

The decade of the 40's BCE was a period of food insecurity and famine in Egypt during the reign of Cleopatra, both of which took place during a time when the Nile River failed to flood. While there is some rain in the region, there is not enough to sustain agriculture, and Egyptians relied heavily on annual Nile River flood to water their crops, said Manning, the William K. and Marilyn Milton Simpson Professor of Classics and a scholar of ancient Egyptian history. "We know that the Nile River did not flood in 43 B.C.E.and 42 B.C.E. -- and now we know why. This volcanic eruption greatly affected the Nile watershed."

One of the texts that corroborated these findings is dated about 39 B.C.E. -- year 13 of Cleopatra's reign -- but refers to large-scale famine and social distress of the previous decade. The inscription describes a local governor who saves the population from widespread famine by finding food when there hadn't been a Nile River flood for several years. He is recognized as a savior by priesthoods, said Manning. "This inscription does not describe collapse or resilience," he said. "It is a more complicated story of trying to survive and to figure out how to distribute grain during a very chaotic time."

Today, Okmok Island, located in the mid-Aleutian Islands, has a population of about 40 people and 7,500 head of cattle. Manning finds irony in the fact that one of the most significant places in world history is in an extremely remote part of the world: "This large volcanic eruption that happened in the winter of 43 B.C.E. had cascading impacts on the climate system and on human societies in the Mediterranean during a vulnerable period of time."

Yet, he added, "Neither Roman scientists nor ancient priests had any notion of Okmok Island."

The new research "allows us to rethink ancient history, especially with regard to environment and climate, and to create a vision of a dynamic, three-dimensional society," Manning said.

Manning and Francis Ludlow's (Trinity College-Dublin) work on the PNAS paper was funded by an NSF grant for the Yale-led project "Volcanism, Hydrology and Social Conflict: Lessons from Hellenistic and Roman-Era Egypt and Mesopotamia."