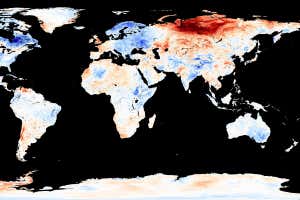 THe usual sky is falling propaganda here, but it was warmer for a change.  Except we are talking about the winter mostly.  It is only now starting to properly break up.  The whole effect is now likely to simply blow away..

At least they dodged a couple of cold spells this winter.

Otherwise the general theme is nonsense.  Notice that Europe and North America were cooler.

Siberia is far warmer than usual

The extreme record-breaking heat that has baked Siberia for several months should serve as an “incredibly loud alarm bell” of the need to adapt to climate change, say researchers.

Thawing permafrost leading to the Norilsk oil spill – one of the worst in Russia’s history – “zombie fires” resurrected from blazes last year and dramatic levels of snowmelt are among the consequences.

The temperatures, while mostly still cold by the standards of someone living in London or New York, have been unprecedented. The Russian meteorological agency says the region has been the warmest in 130 years. The town of Verkhoyansk recorded 38°C on Saturday which would be the highest recorded anywhere in the Arctic if verified. May as a whole was 10°C above average in some areas of Siberia.

However, unusually high temperatures have been recorded as far back as last December, averaging about 8°C above normal over the period, according to California-based non-profit Berkeley Earth. Major temperature data sets held by NASA and others all closely agree.
Crazily high

Zeke Hausfather at Berkeley Earth says the “crazily high temperatures” are unlike anything seen in the past and probably couldn’t have happened without climate change. He says roughly 3°C of the 8°C is down to climate change – because Siberia has warmed faster than the 1°C globally – and about 5°C is driven by natural variability.

“What we can say strongly is this sort of 8°C anomaly would have been incredibly unlikely, probably almost impossible, without the 3°C-plus warming we’ve seen in the region already,” says Hausfather.

It is worth remembering that Siberia has some of the greatest natural variability in temperatures anywhere on the planet, says Samantha Burgess at the Copernicus Climate Change Service. “It often has warm and cold anomalies. What’s particularly interesting is this warm anomaly is quite extreme,” she says.

The heat has been unusually persistent too, lasting through winter and spring. The past few months have been a preview of what the region will be like normally by 2100 under the worst-case scenario for future carbon emissions, says Hausfather.

Given other places in high latitudes have been relatively cool this year, and even well below average in Scandinavia, why is Siberia so hot?
Chain of events

“It’s part of a pattern. Siberia as the area that warms the most was the prediction by the climate models 20 years ago. It’s also what we’ve seen over a stretch of time, it’s just more extreme than ever,” says Kim Holmén at the Norwegian Polar Institute, who is based in the Arctic.

The other factor is the natural variability. Adam Scaife at the Met Office in the UK says a chain of events can be drawn between the Siberian heat and events in the Indian Ocean at the end of 2019. At that time, there was a record Indian Ocean Dipole, a pattern where the ocean is warm in the west and cooler in the east, which also played a role in Australia’s devastating bush fires.

The dipole triggered a global-scale Rossby wave out of the tropics that got into the stratosphere and made the Atlantic jet stream very strong by around January. The jet stream transferred heat to northern Eurasia and “is the first and primary reason that region has been so mild in the recent months,” says Scaife. He likens the jet stream to a flywheel that only began to wind down in May.

Even that “natural” chain of events might be being influenced by climate change. Scaife says there is some evidence that fluctuations in the Indian Ocean Dipole are getting bigger as the ocean warms, but it is too early to say conclusively.

As is often the case with climate change, the impact of such extreme heat in Siberia could drive more global warming. Such sustained heat is thawing permafrost, which has not only been linked to the collapse of the storage tank that caused the Norilsk oil spill, but also threatens to release more carbon dioxide and methane. Holmén says snowmelt in the region has been much faster than usual, which due to the albedo change means more of the sun’s energy is absorbed.

There are other local impacts, with reports of flowers coming early and tree-stripping moths proliferating. Holmén adds that the permafrost thaw could also make it hard for animals such as reindeer to get around. Last week also saw an uptick in Siberian fires. Many of these fires are in the same locations as last year. “I’ve been checking the NASA imagery every day and it is giving me a real sense of déjà vu,” says Mark Parrington at the European Centre for Medium-Range Weather Forecasts.

Burgess says the heat should be treated as a wake-up call to Siberia and the rest of the Arctic for the need to adapt to a warming world. “One of the key things to take from this is an incredibly loud alarm bell,” she says.

Read more: https://www.newscientist.com/article/2246639-siberias-record-breaking-heat-is-a-loud-alarm-bell-on-climate-change/#ixzz6QACBfrFU
Posted by arclein at 12:00 AM