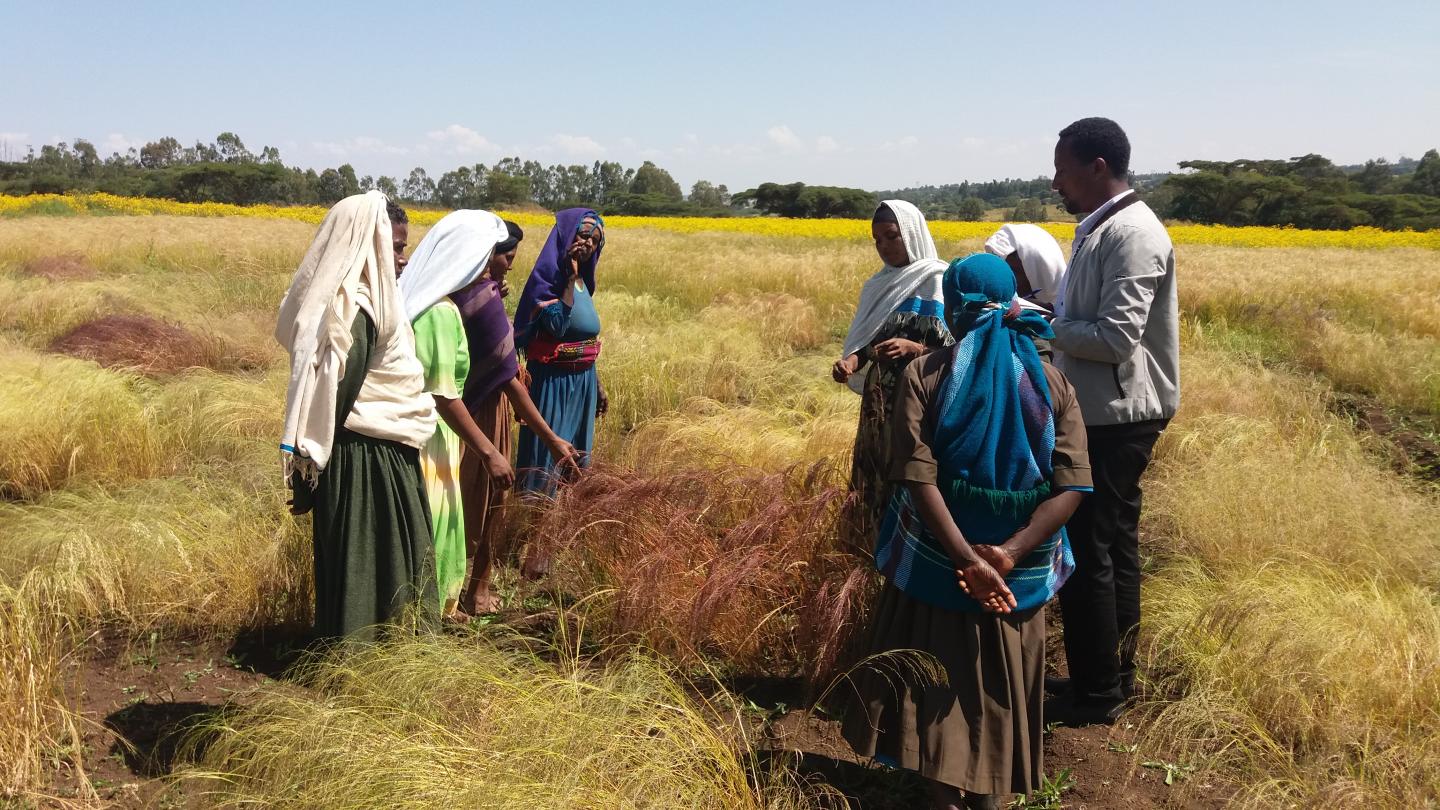 Teff can easily become a global staple and surely will with  this genetic availability.

In time many new foodstuffs will be coming into the market for our benefit.  That particularly includes multiple ruminant species, one we remaster mind to mind communication once again.  The revolution of mob grazing tells us as much.  The productivity of the land and soils benefit hugely.

It is nice to see the science been applied...

Ethiopia's native staple food grain teff is at risk, with 80% of production to be hit by higher temperatures soon if not protected. For the first time, scientists have mapped thousands of the crop's varieties to fast-track efforts to save it

Teff, an ancient grain originally from Ethiopia, is a staple crop for 50 million people in the country. It is also increasingly popular worldwide, touted as a superfood for its gluten-free, high fiber and protein, and low-sugar properties.

Yet dramatic temperature increases projected in Ethiopia by 2070, could force farmers to grow it only in mountainous areas at higher altitudes, driving down production at a time when food is already scarce and the population is rising.

Teff, however, has secrets hidden within its DNA. For the first time, scientists have mapped the grain's massive diversity, consisting of 3,850 known types. Each has unique characteristics, or "traits," allowing them to cope with different environmental conditions.

The study was published in Agriculture, Ecosystems & Environment.

Depending on where they are grown, varieties might be heat or drought-tolerant; or produce more grain. Now, that information has been pinpointed by researchers and stored in individual "passports" for each type, which can be used to breed more resilient varieties.

"The moment you know what is in the grain, you can fast-track breeding of particular types," said Carlo Fadda, a co-author from Alliance of Bioversity International and CIAT. "For example, combining low-yielding types cultivated in hot areas, with highly productive types grown in cold areas, to get a highly productive, heat-tolerant grain."

"Understanding this massive genetic diversity within teff opens up a huge possibility to breed new climate-resilient varieties naturally, within a shorter timeframe of 5-10 years, compared with hundreds of years in the wild," Fadda said.

The grain can withstand temperature extremes from 2°C to 38°C; some can cope with almost 2,000 mm of annual rainfall; others only tolerate 542mm. There are red, brown and white types, each containing varied nutrients and flavors that are used for different dishes.

"No other country growing this crop has this level of genetic diversity, which makes Ethiopia unique," said Fadda. "This diversity can be used to increase production for local demand, or even for export, despite weather conditions."

Ethiopia produces over 90 percent of the world's teff, and as the country of origin, it has the highest teff diversity in the world. In the country, Teff production involves about seven million households and covers some 3 million hectares.

Its growing popularity has led to cultivation in Australia, China, India, South Africa and the United States.

Scientists conducted the study entirely in Ethiopia without exporting any seed. Co-authors included researchers from the Institute of Life Sciences at the Scuola Superiore Sant'Anna in Pisa, Italy and the Amhara Regional Agricultural Research Institute (ARARI) in Bahir Dar, Ethiopia.

"A remarkable thing with teff is that Ethiopia is not among the biggest teff exporters in the world. This is due to manifold reasons, one of which is the fact that teff cultivation is not yet at par with modern means of production," said Ermias Abate Desta, a co-author from ARARI.

"Assuming compliance with international regulations for access and benefit-sharing (e.g., Nagoya protocol), Ethiopia would benefit from the spread of teff as a global crop because it has an enormous reservoir of teff traits that are not present anywhere else in the world," he added.

The teff research is part of a broader interaction between Bioversity, Scuola Sant'Anna, and Ethiopian institutions that includes other crops. Research focuses on smallholder farmer agriculture in Ethiopia.

Compared to globally important crops, teff is understudied and is considered an "orphan" or underutilized crop. But teff research is attracting the attention of international institutions and scientists, including from Italy's Scuola Superiore Sant'Anna.

Ongoing teff research is aimed at characterizing the genetic diversity of a core collection of teff landraces - or farmer-selected varieties that have evolved over generations - and better understand their agronomic potential as it relates to traits desired by farmers.

This includes breeding new teff varieties with increased yield, resistance to pests and climatic and other abiotic stresses, and traits desired by local farmers.

"These actions involve public and private breeding efforts as well as national and international bodies concerned with the conservation of agrobiodiversity of teff in the wake of climate change," said Matteo Dell'Acqua, a co-author from Scuola Superiore Sant'Anna.

The Alliance of Bioversity International and the International Center for Tropical Agriculture (CIAT) delivers research-based solutions that harness agricultural biodiversity and sustainably transform food systems to improve people's lives. Alliance solutions address the global crises of malnutrition, climate change, biodiversity loss, and environmental degradation. The Alliance is part of CGIAR, a global research partnership for a food-secure future. http://www.bioversityinternational.org http://www.ciat.cgiar.org http://www.cgiar.org
Posted by arclein at 12:00 AM