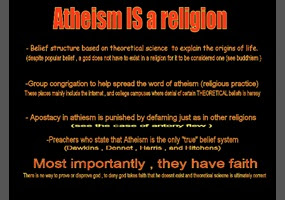 We do need to  understand the rise of so called atheism.  It is a profound conceit and intellectual nonsense that takes advantage of error within the CHURCH and has zero basis in anything other than blind faith.

That is the same blind faith called upon to teach Christianity by the intelectually lazy.  To be an ateist, you must be a man of faith which is absurd.

Christians follow the supernatural spirituality taught and demonstrated by Jesus.  The error of the church has been to fail in teaching this successfully to the laity.  It is obviously difficult.  This failure spun out of control in the courts  of europe.

II    THE RISE OF ATHEISM IN EUROPE

IN order, then, to comprehend thoroughly the nature of the conspiracy, it will be necessary to go back to the opening of the last century and contemplate the rise and advance of the Atheism and Anti-Christianity which it now spreads rapidly through the earth. As that century opened it disclosed a world suffering from a multitude of evils. The so-called Reformation, which arose and continued to progress during the two preceding centuries had well nigh run its course.

The principle of private judgment introduced in apparent zeal for the pure worship and doctrine of Christ, had ended in leaving no part of the teaching of Christ unchallenged.

It had rendered His Divinity disbelieved in, and His very existence doubted, by many who yet called themselves His followers. Socinus and his nephew had succeeded in binding the various groups of Polish and German Protestants in a league where nothing was required but undying hatred and opposition to the Catholic Church. Bayle threw doubt upon everything, and Spinosa destroyed the little respect left for the Deity in the system of Socinus, by introducing Pantheism to the world. In effect, both the Deists and the Pantheists of that period were Atheists. Whether they held that everything was God, or that God was not such a God as Christians hold Him to be, they did away with belief in the true God, and raised up an impossible being of their own imagination in His stead.

In life, in conduct, and in adoration of God, they were practical Atheists, and soon manifested that hatred for the truth which the Atheist is sure to possess. Their theories made headway early in the
century throughout Central Europe and England. Bolingbroke, Shaftesbury, and the elite amongst the statesmen and literary aristocracy of the reign of Queen Anne were Infidels.

Tindal, Collins, Wolston, Toland, and Chubbs were as advanced as Tom Payne was, later on, in the way of Atheism.  But however much England and Germany had advanced their Protestantism to what was called Free-thinking, both were soon destined to be eclipsed in that sad progress by Catholic and monarchical France. France owes this evil pre-eminence to one individual, who, though largely  assisted in his road to ruin by Bayle, and subsequently by association with English Infidels, had yet enough of innate wickedness in himself to outstrip them all. That individual was Voltaire.
Posted by arclein at 12:00 AM