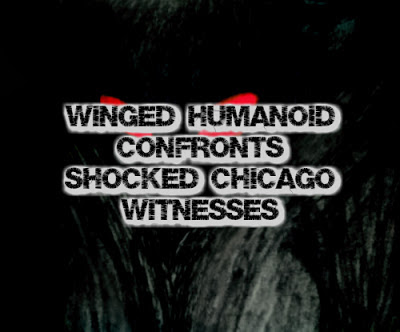 This is totally weird and close up.  from the amazing close up look see and ten seconds is forever, I suspect we are seeing an entity actually wearing a gravity suit in which aerodynamics is used to move but not to counter the majority of earth' s gravity.  It is certainly not Terran.

Otherwise the overall effect is neutral.  That is good news and may well lead to real contact.

The wing design also facilitates a gravity effect as well and the enlarged eyes bespoke an artificial construct across a wide visual band of wavelengths.

I received a brief email today (Thursday 8/10 - 3:45PM ET) from a witness in Chicago. I was asked to call them for further information...so I responded with a telephone call at 4:10PM ET:

The witness, 'AG' and her husband (who live in the Washington, DC suburbs), are in Chicago visiting her parents, who live at 1400 Lake Shore Dr. She was born and raised in Chicago and went to college there also.

Last night (Wednesday 8/9/2017) at approximately 9:20PM CT, the witness and her husband were returning to her parent's residence after taking a brief walk along N. Lake Shore Dr. (walking south). As they approached E. Schiller St. they noticed something large & dark flying towards them from their left (from the direction of Lake Michigan). Both witnesses were startled, as the flying anomaly crossed ahead of them at an altitude of 20 or so feet. They watched the anomaly sweep upwards, over the trees in front of 1400 N. Lake Shore Dr., then stop in mid-air after it reached a height just a few stories from the top of the building. It hovered with a large pair of wings for approximately 5 seconds, as it seemed to focus on the windows in front of it. It then bent backwards and fell into a dive down towards the trees.

The witnesses hurriedly walked in the direction of the intersection and then turned right onto E. Schiller St., quickly walking towards the entrance to the condominium building. Then suddenly, the large winged being slowing descended in front of them, no more than 25 feet away. It hovered about 5 feet above the sidewalk, with it's wing spread open, as it peered at the couple with large bright red eyes that slowly altered back and forth in intensity. Several people on the other side of the street, including a delivery van driver, reacted with screams and frightened yelps. The winged being hovered for 10 seconds, then quickly pulled the wings into its body and shot up quickly into the night sky. There was no sound, other than a rush of air as the being flew upwards.

The witness 'AG' described the winged being as 'human-like' with a small head that narrowed at the top. It had legs like a human with long feet that tapered. Neither witness noticed any arms. The body was 5-6 feet in height and it had wide wings that resembled the top wings of a butterfly, attached along the body. The illumination from the building entrance could be seen through the wings, so it looked to be made of a skin or membrane. The wing span was easily 10+ feet. The legs pulsated as it hovered in the air. The overall color was very dark...like a deep bluish-green. The skin on the body may have been moist, since it was shiny. The eyes were large compared to the head size...slightly slanted, and alternated back and forth in brightness. It made no noise, other than a slight humming from the pulsating legs. Both witnesses stated that they felt 'a vibration that emanated from the being.'

The witness did see at least one camera flash come from across the street. Neither witness was able to retrieved their phones...the fear and shock was too profound during the encounter. AG stated that she literally 'fell to her knees' after the incident, and that her husband had to assist her the rest of the way. Neither witness has slept more than an hour or two since their encounter 18 hours previous. 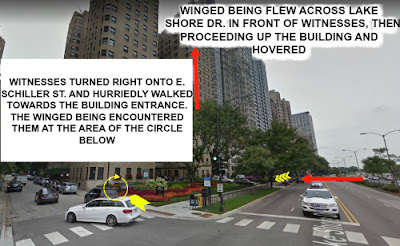 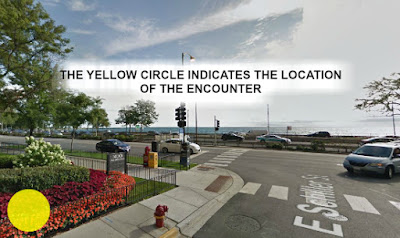 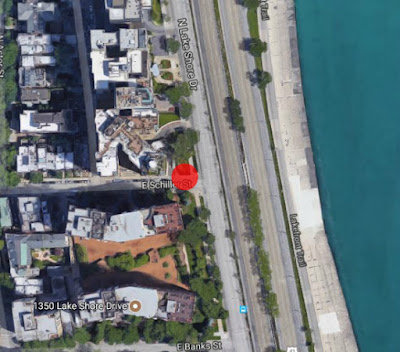 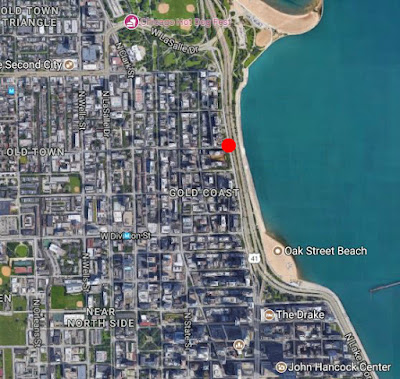 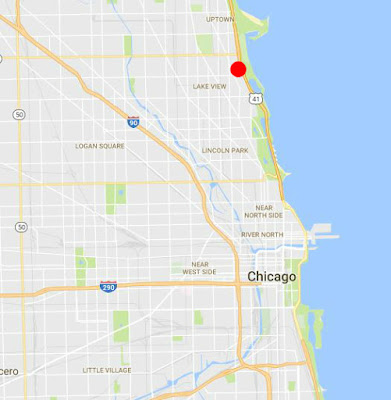 NOTE: The witness' statement by telephone was quite dramatic and detailed. I'll admit, she freaked me out a bit. This encounter / sighting, to date, offers the best description of this flying humanoid. The witness' husband talked briefly, but he acted like he'd rather not say too much. The witnesses were suppose to fly home today, but they have delayed their departure for a few days. AG told me 'I'm just not ready to get on an airplane right now.' Any updates will be included with this post. This sighting has been added to the Chicago Phantom / Owlman / Mothman / Man-Bat / Flying Humanoid Reports - Chicago Metro Area - Interactive Map

UPDATE: I have decided to disclose another incident (that I have yet to report...except to the 'Chicago Phantom Task Force'). This sighting occurred on Saturday evening August 5th. The witness lives 1 block away from today's report at 1400 N. Lake Shore Dr. I was hoping to get more information through an interview, but the witness never got back to me:

I tuned into WGN Radio this morning around 4:15 CST and to my amazement heard talk about the big moth in Chicago.

I saw something weird yesterday evening out my window! I live at 1350 N. Lake Shore Drive and was looking out my window over to the condos at Ritchie Court. At about floor 17, I saw reflected in that window, some dark blue wings pass by. First one window, then the next, and a few seconds later, another window. It was flying! I thought it was someone shaking a towel, but everything inside me said it was a flying moth! C
Posted by arclein at 12:00 AM