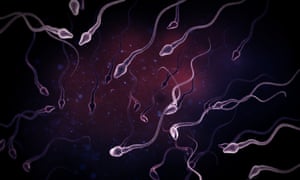 What this does is sharply reduce the faux contorversy.  We really have a problem and it must be driven by western diets over the time period.

I have posited a link to roundup or glyphosite. This is in our food chain and for the time frame as well.  It also has an effect on the biological pathways related to reproduction.  This work remains obscure and continously shouted down by the industry.

Yet there are also plenty of other potential culprits as well.  My point is that it will be diet driven.  Recall that it took acascade of pesticides to trigger colony collapse amoung bees.
.

Reasons for the ‘shocking’ drop are unclear, say researchers, and represent a huge and neglected area of public health

The concentration of sperm in the ejaculate of men in western countries has fallen by an average of 1.4% a year, leading to an overall drop of just over 52%, say researchers.

Sperm counts among men have more than halved in the last 40 years, research suggests, although the drivers behind the decline remain unclear.


The latest findings reveal that between 1973 and 2011, the concentration of sperm in the ejaculate of men in western countries has fallen by an average of 1.4% a year, leading to an overall drop of just over 52%.


“The results are quite shocking,” said Hagai Levine, an epidemiologist and lead author of the study from the Hebrew University of Jerusalem.

Men don’t worry about their sperm count – but they should

While infertility treatments such as IVF can offer solutions to potential ramifications of the decline on one level, little has been done to address the root of the issue, said Levine, pointing out low sperm counts might also be an indicator of poorer health among men more generally.

“This is a classic under the radar huge public health problem that is really neglected,” he said.


It is not the first time researchers have highlighted concerns about sperm counts, but previous studies have been criticised, with some saying the decline could be down to changing laboratory methods, or studies failing to take into account whether participants were selected on the basis of infertility problems.


But the authors of the latest study say they have addressed such concerns, analysing only studies that used the same sperm count method, were of a reasonable size and involved men not known to have infertility problems or disease, among other measures.


The study, published in the journal Human Reproduction Update by an international team of researchers, drew on 185 studies conducted between 1973 and 2011, involving almost 43,000 men.

The team split the data based on whether the men were from western countries – including Australia and New Zealand as well as countries in North America and Europe – or from elsewhere.

After accounting for factors including age and how long men had gone without ejaculation, the team found that sperm concentration fell from 99 million per ml in 1973 to 47.1 million per ml in 2011 – a decline of 52.4% – among western men unaware of their fertility.

For the same group, total sperm count – the number of sperm in a semen sample – fell by just under 60%.

In addition, a less dramatic decline in sperm concentration since the 1970s was seen for western men who were known to have conceived with a partner, but there was no clear trend for total sperm count in this group.

By contrast, no such trends were seen for men in other countries – although the authors caution that far fewer studies have been carried out among such populations.


Richard Sharpe, an expert in male reproductive health and professor at the University of Edinburgh, welcomed the study, saying the research has tackled many of the problems of previous analyses, adding that it “is about as close as we are going to get” to being sure of the decline.

But he stressed it still unclear what is behind the drop, meaning that it is difficult to address. “That is primarily because we have seriously under-invested in male reproductive research,” he said.

Men, we need to talk about sperm

Read more Tina Kold Jensen of Syddansk University in Denmark, who was not involved in the current research, said she was surprised by the new findings. “I thought it would probably have stopped,” she said of the decline, pointing out that she had been involved in a 15-year Danish study focusing on young men recruited for military service which found no drop in sperm counts. But, she noted, that might be because many of the men had poor sperm counts anyway.

Levine agreed that research into potential causes was needed. Numerous possibilities have been mooted, with research suggesting links to body weight, a lack of physical activity, smoking, and exposure of pregnant women to chemicals found in myriad household products, known as endocrine disruptors.

But controversy remains. While Allan Pacey, professor of andrology at the University of Sheffield, said the latest study is the best he’d ever read on the decline, he said the jury is still out on whether the trend is real.

“You need to go out to answer that question. For example you take a random sample of every 18-year-old in the UK and you test 10,000 18-year-olds every year prospectively over the course of 20-25 years,” he said, emphasising that Jensen’s study using such an approach had found no decline.
“We have got very little epidemiological evidence to say what might be causing it, so we are still scratching our heads a little bit in my view,” said Pacey.

But he agreed there is cause for concern around male reproductive function, pointing out that rates of testicular cancer are on the rise, and stressed that men who are concerned about their sperm count and who wish to have children should not delay.

“If you are a guy with a low sperm count and you try for a baby when you are 21, you are probably not going to notice you’ve got a problem,” Pacey said. “But if you are trying with your partner when she is 35 then that’s when the heartache comes, because by then you have got low sperm count, you’ve got an older partner and you haven’t got a lot of time to try and fix it medically.”