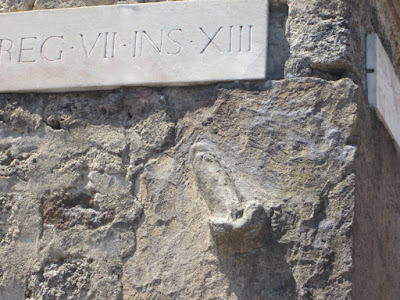 What it does do for us is bring clarification. Forced sexuality was opposed by early Christian leaders, but not consensual sexuality.

Thus the later interpretation comes at a time when consensual sexuality of all types had been suppressed for centuries.

Our own culture is passing through an era of reappraisal whose outcome is still unclear.  Even apologists for pedophilia have arisen into public consciousness.  All that begs the main issue.  That our open culture remains vulnerable to forced sexuality of all types and that is just wrong.  Imposing a working protocol for the sexual education of youth is seriously needed as is the need to also establish a working protocol for sexual release of both sexually active men and women that does not necessarily demand economic consequences.

If you were walking through the city of Pompeii around 100 B.C., you’d see a wide amphitheater, ornately-constructed bathhouses, column-lined temples…and penises.

Around 80 percent of the artwork decorating this ancient Roman town would be considered explicit today, according to Rev. Canon Steve Chalke, a prominent British evangelical Christian.

“Endless penises in this culture,” he said. This decorating style, Chalke believes, should encourage modern-day Christians to reconsider how they interpret the most famous text from the Roman Empire: the Bible.

A whole wall of penises from the ruins of Pompeii.

Like any good book, Chalke argues, the Bible needs some context if readers truly want to understand its passages.

But today’s evangelicals often choose to take the gospel literally, ignoring the historical contexts in which the passages were penned.

For that reason, many members of the church use New Testament “clobber passages” — or passages used to deny rights to any particular group — to cling to their belief that homosexuality is a sin.

If you’re reading the modern translation of the Bible and then copying and pasting the words into the society you see around you today — or even in Martin Luther’s time — this misunderstanding makes sense.

A penis indicating the location of a Pompeii brothel.

When Leviticus reads “You shall not lie with a male as with a woman; it is an abomination,” the meaning seems pretty straight forward.

If, that is, you know what lying with a man was all about in ancient Roman times. Which, thanks to Pompeii and Chalke, we now do.

“500 years ago, Martin Luther and Calvin didn’t have the tools that we now have to assist us in our contextual understanding of the writings of scriptures. We’ve come miles because of the discovery of the Dead Sea Scrolls, miles because of archaeological discoveries around Pompeii, and we’ve had all sorts of other cultural and linguistic leaps forward,” Chalke told the Huffington Post. “It’s our job to use them and I think, in using them, we find these old understandings really don’t work anymore.”

Sex, he insists, was everywhere — it was considered natural, and spiritual and totally appropriate between all genders.

But it could also be exploitative. Rules at the time dictated that Roman men could only have affairs with people of “lesser status” — in other words, people who were not considered to be Roman citizens.

“Roman boys were protected in a way that slave boys weren’t. For a Roman man, sex was a legitimate part of life, but you had to have sex with an inferior and you had to penetrate them, you weren’t allowed to be penetrated,” Chalke said.

Because of this cultural (note: not religious) restriction on same-sex relations — in which wealthy or high-status people were seeking out more vulnerable groups of men — same-sex intercourse was seen as the result of a power imbalance.

It’s this exploitation — not the physical, same-sex relation — Chalke says, that Paul and other Biblical authors, condemned.

They never said anything about mutual, genuine love between people of the same gender. “The people Paul is talking about, he said they’ve abandoned God, they’re full of deceit, lying,”

Chalke told the Post. “Whoever Paul is talking about, it cannot be the wonderful same-sex couples that are in our church, or the gay man or the transgender woman I know. It just can’t be them.”

Because this religious leader said you can.

“Our poor understanding of the New Testament has brought misery, persecution, oppression and rejection to countless hundreds of thousands and millions of LGBT people,” Chalke said. “It’s time to apologize for the mistakes we’ve made and move on.”
Posted by arclein at 12:00 AM