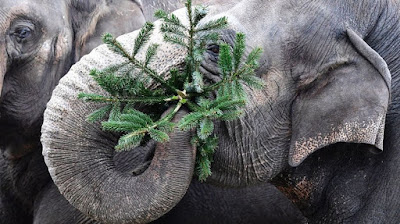 I needed to know this. Restoration of mammoth and mastodon populations is not too far off. after all it now merely requires modifying the DNA of our own elephants and that we are doing elsewhere. That then begs the real question of what they could eat.
We have already understood that proper forest management of the boreal forest will demand a removal of fallen branches and trimming of lower limbs to produce long clean logs.   Now we know that the weather adapted elephants will actually eat all that material.  This is a huge add to the development of human occupation of that forest as well.

The  forest can produce moose meat in particular as well as other smaller deer family meats as part of a managed bull rush silage winter feed cycle.  Add working elephants as well and we have a way to operate the  whole forest cycle in terms of lob supply while making the forest completely accessible.
Throw in pine nuts, other fruits and a massive fishery including salmon and it is looking good..

Some people who celebrate Christmas decorate their trees with holiday treats: candy canes, gingerbread people, popcorn. It looks festive, and can even provide a furtive snack if the family dinner is taking too long. But for some, the entire Christmas tree itself makes for a holiday treat, serving as both toy and treat alike.

The zoo in Berlin, Germany, has famously fed its elephants Christmas trees for years. After the holidays, the animals receive small trees that they play with, lifting and throwing the small trees with their trunks. When hungry, they hold the trees down with their feet and strip off the branches and needles to munch on. Just like humans, animals prize novelty and variety, too.

Before they eat the trees, the elephants will often carry them around and play with them like toys.
TOBIAS SCHWARZ/AFP/Getty Images

This elephant at the Berlin zoo will strip the branches off the Christmas tree.
TOBIAS SCHWARZ/AFP/Getty Images

But don't rush down to your local zoo to donate your old tree. A Zoo Berlin elephant keeper told the Washington Post that the trees are unsold ones donated from local tree farms and vendors, not post-holiday discards from members of the general public. That's because trees kept in a house could have chemicals or other contaminants on them, and the elephants prefer to eat fresh, moist trees — not the dried-up, crispy ones creating fire hazards that many people may still have up well into the new year.

Thinking of inviting a pachyderm over to your next dinner party, and wondering what to plate? According to this Prague zookeeper, elephants — at least in Czech Republic, where zoos also feed their elephants holiday trees — prefer fir trees to spruce, and like pine least of all:

Even juvenile elephants get in on the Christmas tree snacking.
TOBIAS SCHWARZ/AFP/Getty Images

Zookeepers at the Berlin zoo have fed their elephants trees for years, always right after Christmas and New Year's Day.
Posted by arclein at 12:00 AM