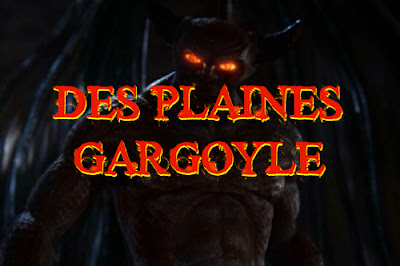 Someone has finally identified this ceature as a gargoyle.  We now have cluster in and aound chicago and it is fair to say that they have aclimatised to human occupation and now operate inside urban limits.

Up to now, i have been alone in identifying the chupacabra in its flying form as a gargoyle.  I have also associated this creature with the cattle mutilation phenomena as well.

I do find it unexpected that it is able to lift so easily into the air and leave.  This is much better than typical for birds and suggests that their wings are more eficient than previously thought.  An extension of all this is that the pterodactly is also a much betteflye than we anticipated.
.
Des Plaines Gargoyle

BTW...I am involved in a very bizarre case involving a West Virginia family, possibly related to the Mothman of Point Pleasant. I've been in contact, and working with the family, for about 2 months. I have received permission to profile the case on the blog. I will post the information as I get it...starting very soon. Stay tuned. Lon

On a Summer evening in 2013 my son and I were leaving my friend's house, who lived outside of Des Plaines, Illinois. Her driveway is about a 1/4 mile long. There are no lights along the driveway. About halfway to the road, my son yelled out 'what's that?' I was startled and slammed on my brakes. 'What are you yelling for?' 'There...in the tree!' I answered 'What are you looking at?'

I glanced up into the tree, and noticed talons wrapped around the large lower branch. The tree was thick with foliage, so it was hard to make out what it was. I figured it was just an owl or eagle, but as we watched the tree began to move, like there was something very heavy in the tree. The headlights were pointed directly at the tree, so there was some light.

Then suddenly, a human-like figure dropped from the tree and landed upright on the ground in front of us. It was dark grey in color. As I looked at the clawed feet and muscular legs, I noticed the bottom tip of folded wings behind it. My eyes followed up the human-like body, which looked like dark grey skin. The head and face literally reminded me of a gargoyle...snarling features and evil-looking. The eyes were large and reflected an orange color. I believe it also had short horns on the side of the head. 'OMG...what is that?' At the same time my son begged me 'Let's go! Let's go!' The beast opened its huge wings and literally took off up over the car!

I called my friend on my cellphone as we were driving home. I told her what we witnessed...she was totally dumbfounded. She told me that she had never seen anything like that. While driving, I ask my son what he thought he saw. He called it a 'Batman.' I simply responded 'OK'...but I thought gargoyle or some other mythical creature. I was deeply affected by this beast and have carried this odd feeling that it would remember us.

Now I've been reading about the sightings in Chicago, and wonder of there is a connection. I fear that a terrible event may occur in the city. My son is in college in Chicago, and I work downtown. I am scared for us.

I swear what I have described is true. I wish to remain anonymous...and I don't seek any recognition.

NOTE: I contacted the witness by email. Her email address was from a Chicago law firm...and since her name is part of the firm name, I can assume she is an partner. Anyway, the description is similar to some of the recent sightings. Is there a connection? Well, there are old reports from in and around the Chicago metro area coming to our attention, so there may actually be some affiliation.
Posted by arclein at 12:00 AM