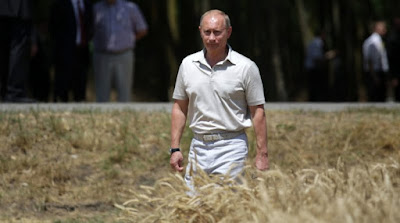 We are building up for catastrophic blow back on the whole agribusiness model in which roundup in particular is used.  It will be triggered by epidemic levels of unnecessary autism effectively disabling huge numbers of the population.  Now i do know also that the problem will be treated successfully but not by actually curing it.

There will be no escape for the reckless behavior of the industry except by rapid conversion to organic.

Thus Russia will lead the whole movement and gain wonderfully in reputation.

Most of you know that Russian President Putin has Russia saying “not yet” to GMOs and asserting their national focus on establishing themselves as the world’s largest exporter of organic food, as well as providing their people with healthy non-GMO food.

This wasn’t just a spare of the moment decision either. It came about following years of analyzing the downside to using GMO foods and their overall effects on its consumers. Since there are no biotech industries that thrive there, Russia had no real dog in the fight, so to speak.


Part of Russia’s agricultural system includes small private rural “gardens” that provide produce to the country’s overall welfare. It is estimated that around 40 percent of all vegetable and fruit crops come from that sector alone

As part of Russia’s drive to provide nothing but organic food for itself, as well as other nations in Europe, the Middle East, and Asia, it is reported that the Kremlin has been awarding land free of charge to farmers or gardeners who pledge to produce only organic fruits and veggies.

This was found in an article by Baxter Dmtry on Yournewswire.com.
Posted by arclein at 12:00 AM