The Supernatural Weapons of the Mahabharata and Their World Destroying Power 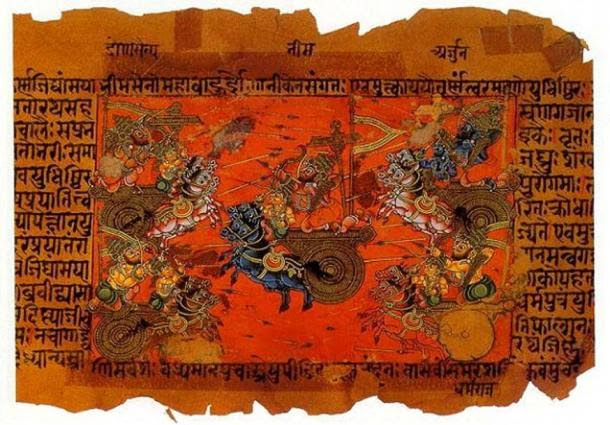 One thing that i have never truly commented on is that there is ample evidence in scriptures to support  both the Bronze Age and an earlier antediluvian technological civilization that sustained human lifespans past a thousand years.  Our own science is saying this is completely plausible.

The memory of this past age has bled into the scriptures and has been sustained as we finally slipped into a primitive global dispensation rather recently in fact.   I suspect the last of the long lived humans left off not much later than 4000 to 5000 years ago with the establishment of several large cities.  Since then we have been living short cycle lives, forcing rapid change as a matter of course.

The Supernatural Weapons of the Mahabharata and Their World Destroying Power

Whilst an astra is the general term used to denote a supernatural weapon in Hindu mythology, these weapons have certain features that allow them to be distinguished from those found in the mythology of other world cultures. For a start, each astra was presided over by a certain deity. In order for an astra to be used, the deity has to be invoked, who would then bestow supernatural powers onto the weapon wielded by the hero. As a supernatural weapon, an astra could not be countered by regular weapons, though it may be repulsed by another astra.

The Battle of Kurukshetra, fought between the Kauravas and the Pandavas, recorded in the Mahabharata. (Public Domain)

There are also specific conditions that need to be fulfilled in order for one to wield an astra. A warrior has to have the knowledge required to arm, control and disarm the supernatural weapon. This often takes the form of a mantra, and is usually passed down from master to student by word of mouth. It is without surprise that this knowledge is handed down only to the master’s most qualified students. There are also certain astras that can only be acquired direct

The painting depicts the battle of Kurukshetra of the Mahabharata epic. (Public Domain)

The Weapons in Action

A statue of Vishnu, with the Sudharshana Chakra in his upper right arm (CC BY SA 2.5)

Another astra found in the Mahabharata is the Pashupatastra. This weapon is regarded to be incredibly destructive, and capable of destroying all creation. The Pashupatastra may be launched by the mind, from the eyes, by words, or from a bow, and was a personal weapon of Shiva. This astra was given by the god directly to Arjuna, another protagonist of the Mahabharata. In the epic, Arjuna does not use this astra, as it would have destroyed the entire world.

Yet another well-known astra in the Mahabharata is the Brahmashira, a weapon created by Brahma. Only two characters in the Mahabharata possessed the knowledge required to use this weapon – Arjuna and Ashwatthama. This astra is considered to have four times the power of the Brahmastra, another weapon created by Brahma. The Brahmastra is mentioned in several Puranas, and has been compared to the nuclear weapons of today. Despite its strength, the Brahmastra may be countered by the Brahmanda, which is able to swallow the astra and neutralise it.

Arjuna and Ashwatthama unleash their Brahmastras against each other, as Vyasa and Narada arrive to stop the collision. (Public Domain)

As for the Brahmashira, it has been mentioned that an area struck by this weapon would be completely destroyed, the land would be barren for 12 years, rain would not fall for the same amount of time, and everything there will become poisonous. In the Mahabharata, Arjuna and Ashwatthama used the Brahmashira against each other. Fearing that the power of these two astras would destroy the world, the sages beseeched the two warriors to take back their weapons. Arjuna was able to do so, whilst Ashwatthama, lacking the required knowledge, was unable to. The warrior was given the option of choosing any single target to destroy, and Ashwatthama directed his astra to the wombs of the Pandava women, in the hope of ending the Panadava Dynasty. This failed, however, as Krishna saved Parikshit, the unborn child of Arjuna’s daughter-in-law, Uttara. For this cowardly act, Ashwatthama was cursed by Krishna.

Top image: Krishna driving a chariot with Arjun behind in Mahabharata (CC BY 2.0)