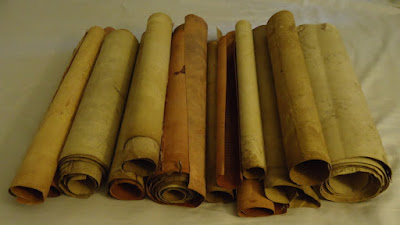 The Kolbrin is a collection of books and scrolls whose physical remains have not yet been made available for investigation.  Yet the traditions reported around its provenance suggested a genesis conformable to other such collections known and lost.  Better yet it appeared from interpretations of other readers that it may well predate the Hebrew Bible.  For that reason we dove into it the way we have by reading a short part of it every day in the hopes of picking up aspects that we could recognize.  This stops us from reading over material and missing the obvious.

I also add that my independent investigations mean that i am uniquely informed regarding the Bronze Age in particular and the  much earlier Pleistocene Nonconformity (PN).  I also understand the timelines and the special impact of remnant human longevity in the first several thousands of years after the PN.


I want to state that i have no doubt that these documents are everything claimed and a great deal more besides.  This is actually an astonishing discovery largely confirming my own independent discoveries as well and hugely enlightening much of that work with direct observations and much learned.

I suspect others attuned to other aspects will see much more as well.  This book(s) is very important.  We obviously have a translation and i do not know what the original language happens to be.  It should be an Egyptian alphabet from the second millennium BC, but parts may well have been translated into Latin after arrival in Glastonbury. In the event a group of wise men were sustained by the hosting community at least well past return to Europe even up to the present. They were economically sustained through their involvement in copper smithing.  Recall the ongoing existence of copper and tinsmiths up to the industrial revolution..

It appears that much of the material itself was part of a collection put together in Egypt and sent along with an expedition to create a colony in North America. Surprisingly this took place quite late in the Bronze Age and may well have occurred after the sudden collapse of the Atlantean world around 1159 BC.  Prior to this date, copper was been drawn from Lake Superior for the preceding 1500 years and dominated global trade as a form of currency. The material strongly suggests that part of the reason was preservation of their wise man tradition dating back to Antediluvian ( pre 13,000 BP) traditions and conform brilliantly with my own researches.

More pointedly however the folk involved were the tribe of metal workers central to the Bronze Age itself and the actual human glue for the entire global Bronze Age Trade.  Thus their economy actually drove the entire Bronze Age and this was substantial until 1159 BC when the loss of their main island city named Poseidon collapsed demand for the copper.  Those mines in Lake superior were then largely abandoned but perhaps not all but the support infrastructure remained intact for many additional centuries.

Trade itself dwindled from 1159 BC through the late Dark Ages until 1000 AD when the Viking sea culture arose and then penetrated the Northern Hemisphere of the Americas and Eurasia.  This reopened contact and obviously led to an offer to move the community or at least a significant part over to England.  At this time the market for copper had markedly declined and had been mostly replaced by iron products.  Yet demand in North America was also quite small as i am sure that they were not about to sell good swords to the locals.

Whatever their reasons they chose at least in part to return to Europe under Viking sponsorship.   It gives us an intact channel from the ancient Egyptian world to our own present.  Better yet it means that the work was well maintained up until 1000 AD which is a real surprise considering how much had been lost to the Roman Empire five hundred years earlier.  Thus the organic material is only now at the end of its life, while the bronze  books remain intact.


When you understand that this massively supplements the scant texts we have comprising the Hebrew bible circa 600 BC and Homer circa 1160 BC and the insular Sumerian material back to 4000 BC, you begin to grasp its importance.  We actually have an excellent overview of the Bronze Age culture from this and the utter importance of the global sea trade.

It is actually more than that  because parts are multiple eye witness reports circa 13,000 BP when the ice age was abruptly interrupted and additional later reports showing the introduction of metal working and agriculture and laws.  You can not make this stuff up.  What really rings true in all this is the writer's natural myopia itself..