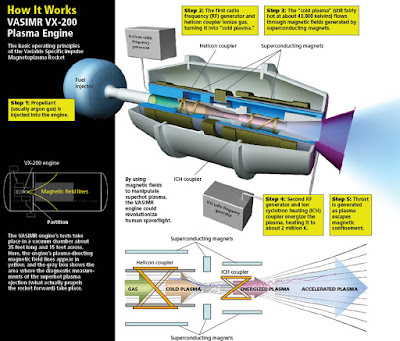 This technology is very important so long as we desire an impulse Drive.  Way more important we will have a space drive able to operate without the burden of large fuel supplies and to do so continuously.

All this means is that our craft will achieve appreciable fractions of light speed.

[Webster, Texas – for immediate release] – Ad Astra Rocket Company has successfully completed all contract milestones and deliverables for the second of its three-year Next Space Technology Exploration Partnerships (NextSTEP) contract with NASA.

The 9 milliondollar, fixed-price contract remains on schedule and on budget. After a successful year-two performance review at NASA Headquarters in Washington D.C. on July 24, 2017 and completion of a 10-hour cumulative test of the 200SSTM rocket at 100kW, Ad Astra received NASA approval to proceed with year-three activities. The goal of the project is to demonstrate a 100- hour continuous firing of the company’s VX- 200SSTM VASIMR® prototype, at a power level of 100 kW.

The company marches towards this goal on schedule, along a path of interim milestones. These focus on the rocket’s new active thermal management system, designed to enable it to operate at full power indefinitely. This year’s major accomplishments include the demonstration of the rocket’s new thermal management system and major modifications to Ad Astra’s Texas 150 m3 vacuum chamber and laboratory infrastructure. These are needed to handle the unprecedented thermal load from the rocket’s 3 million-degree plasma exhaust.

These modifications were validated in a series of rocket firings that began in early July. The final year-two milestone of 10 hours of accumulated rocket operation at 100 kW was successfully completed on August 1, 2017. The team now moves to year-three with high power plasma campaigns of increasing length, with periods of hardware inspection and opportunities to implement system improvements based on lessons learned.

Year three will culminate in the late summer of 2018 with the 100-hr continuous test of the VX-200SSTM at 100 kW. Ad Astra expects that this test will bring the VASIMR® engine to a technology readiness level (TRL) of 5, a step just before space flight. Some comments from Ad Astra’s team members, directly involved in the recent 10-hr high power test, capture the excitement of the moment. "I was excited to see the combination of each team member's individual effort produce such an awesome system. In just a few days, with VX- 200SS, we were able to do what took years to do with the old VX-200 experiment. It just kept going and going," said Aidan Corrigan, Research Engineer in charge of facilities and cooling systems.

Matt Giambusso a Research Scientist in charge of command and control said "Achieving this goal further demonstrates the viability of the VASIMR® technology and the determination of the Ad Astra team. I am honored to be a part of this continuing work." Since 2005, Ad Astra invested more than $30 million in private funds to mature the VASIMR® engine.

The NextSTEP program, through a competitive process, brings NASA and the US Government as a funding partner going forward with no investor dilution. The VASIMR® rocket could support commercial space logistics transport operations in the Earth-Moon environment, as well as NASA’s long-term deep space exploration goals.

ABOUT THE TECHNOLOGY Short for Variable Specific Impulse Magnetoplasma Rocket, VASIMR® works with plasma, an electrically charged gas that can be heated to extreme temperatures and controlled and guided by strong magnetic fields, which also provide insulation. Plasma rockets, such as VASIMR®, have an extremely low fuel consumption and much higher performance as compared with conventional chemical propulsion or other electric rockets. They will provide a major economic and operational advantage for US leadership in space commerce, including satellite deployment, re-boost services, refurbishment and end-of-life disposal.

ABOUT AD ASTRA A US Delaware corporation established in 2005, Ad Astra Rocket Company is the developer of the VASIMR® engine, an advanced plasma propulsion system for the emerging in-space transportation market. Ad Astra also owns and operates supporting R&D subsidiaries in the US and Costa Rica. The company also develops earthbound high technology applications in renewable energy, advanced manufacturing and applied physics. Ad Astra has its main laboratory and corporate headquarters at 141 W. Bay Area Boulevard in Webster, Texas, USA, about three miles from the NASA Johnson Space Center.
Posted by arclein at 12:00 AM