The secret to man's intelligence? POTATOES 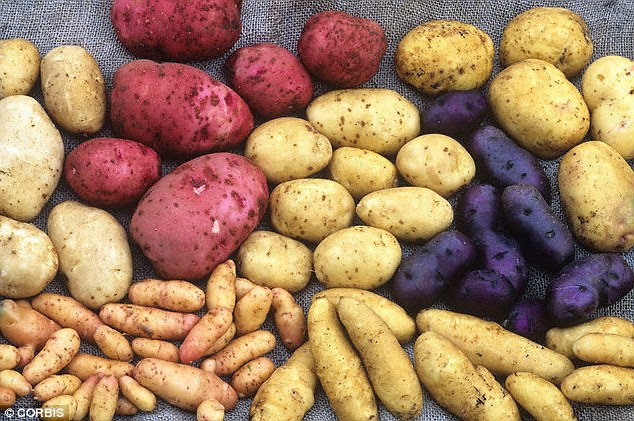 Surprising actually but truly makes sense.  All those roots, and not just potatoes, demand boiling in order to be easily eaten.  They were also the largest and best source of food for a hunter gatherer.  Having seen a film of a bushman harvesting a large tuber, it is a safe bet that the land everywhere is full of tubers of some sort.

A local band would soon learn how to identify them.   Grains and seeds are much more trouble.  At best you can gather a handful or two and then you have to cook them long in order to chew o eat.  Until we actually planted those grains it would be too difficult.

http://www.dailymail.co.uk/sciencetech/article-3189454/The-secret-man-s-intelligence-POTATOES-Humans-evolved-large-brains-ancestors-ate-starchy-carbohydrates.html
The human brain is unique - no other animal possesses such a large brain relative to the size of its body.

It has been argued that an increase in meat consumption could have triggered the increase in size, but now scientists believe that we may have another food to thank: the humble potato.

Researchers suggest carbohydrate consumption, particularly in the form of starch, was critical for the extraordinary development of the brain over the past million years.

Big complex brains require lots of energy to develop and function properly. While synthesis of glucose from sources other than starch-rich tubers like potatoes is possible, it is not especially efficient, and such high glucose demands would not have been met on a low carbohydrate diet

They say starches would have been readily available to ancestral human populations in the form of potatoes as well as in seeds, some fruits and nuts.

The new study combines archaeological, anthropological, genetic, physiological and anatomical data to argue it carbohydrate consumption was key in the human brain's evolution.

Up until now there has been a heavy focus on the role of animal protein and cooking in the development of the human brain over the last two million years and the importance of starch rich plant foods has been largely overlooked.

Dr Karen Hardy and her team at the Autonomous University of Barcelona say that there are five crucial reasons why a starch-rich diet was critical in human development.

WHY IS THE HUMAN BRAIN SO UNIQUE?
Humans have a larger cerebral cortex relative to the rest of the brain than any other creature in the animal kingdom.

The cerebral cortex handles many of our unique skills, like language and problem solving.

Last year scientists at Oxford University discovered a new region inside the brain that added to its uniqueness.

The brain region is called the lateral frontal pole prefrontal cortex and is linked to higher thinking processes.

This part of the brain houses Broca's region, which plays a critical role in language.

Differences in the ventrolateral frontal cortex have also been tied to psychiatric disorders such as compulsive behavior disorders and attention deficit hyperactivity disorder (ADHD).

While synthesis of glucose from other sources is possible it is not especially efficient, and such high glucose demands would not have been met on a low carbohydrate diet.

This need for carbohydrates would have been satisfied in part by the development of cooking.

While raw starches are often poorly digested in humans, when cooked they lose their crystalline structure and in turn make the assimilation of nutrients much easier.

The ability to use fire for cooking would have unlocked nutrients and enabled our ancestors to eat a far broader diet including tough, starchy roots.

Low maternal blood glucose levels compromise the health of both the mother and her offspring, which suggest that a certain level of carbohydrates would have been essential for survival.

In addition to this, starchy carbohydrates would have been readily available to ancestral human populations in the form of tubers, as well as in seeds and some fruits and nuts. 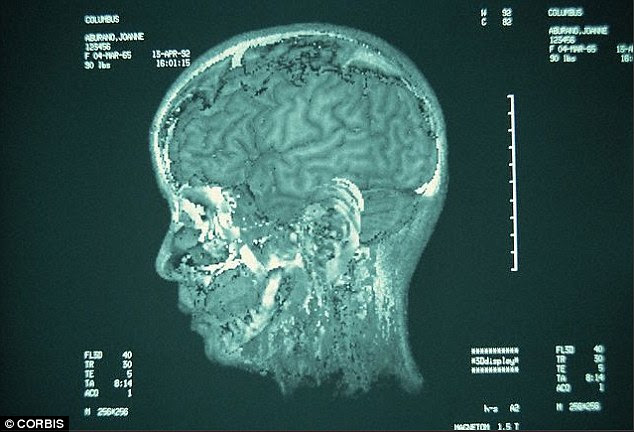 The human brain uses up to 60 per cent of the body's blood glucose. It is thought that cooked starchy food like potatoes could have provided a glucose-rich diet necessary for this to develop in our early ancestors

The researchers also point out that humans possess six salivary amylase genes, while other primates just have two, increasing the ability to digest starch.

The exact date at which these additional genes appeared remains uncertain, but analysis suggests it was at some point in the last million years.

Dr Hardy explained that after cooking became widespread and the salivary amylase genes multiplied, this increased the availability of dietary glucose to the brain and foetus which, in turn, allowed the acceleration in brain size which occurred from around 800,000 years ago onwards.

She said: 'In addition to the increased energy availability from starch, other advantages of the coevolution of cooking and amylase expression include a reduction in chewing time, increased palatability and digestibility of polyphenol-rich plant foods, and improved reproductive function; a reliable supply of glycemic carbohydrate is likely to have sustainably supported foetal growth, provided the extra caloric intake needed during lactation, and improved infant survival.

'The regular consumption of starchy plant foods offers a coherent explanation for the provision of energy to the developing brain during the Late Pliocene and Early Pleistocene while the development of cooking, and a concomitant increases in salivary amylase expression, explains how the rapid increases in brain size from the Middle Pleistocene onward were energetically affordable.'

Added Dr Hardy: 'Eating meat may have kick started the evolution of bigger brains, but cooked starchy foods together with more salivary amylase genes made us smarter still.'

The study was published in The Quarterly Review of Biology.