Can You Imagine a Taxation System Where the Wealthy Competed to Pay the Highest Taxes? It Really Happened! 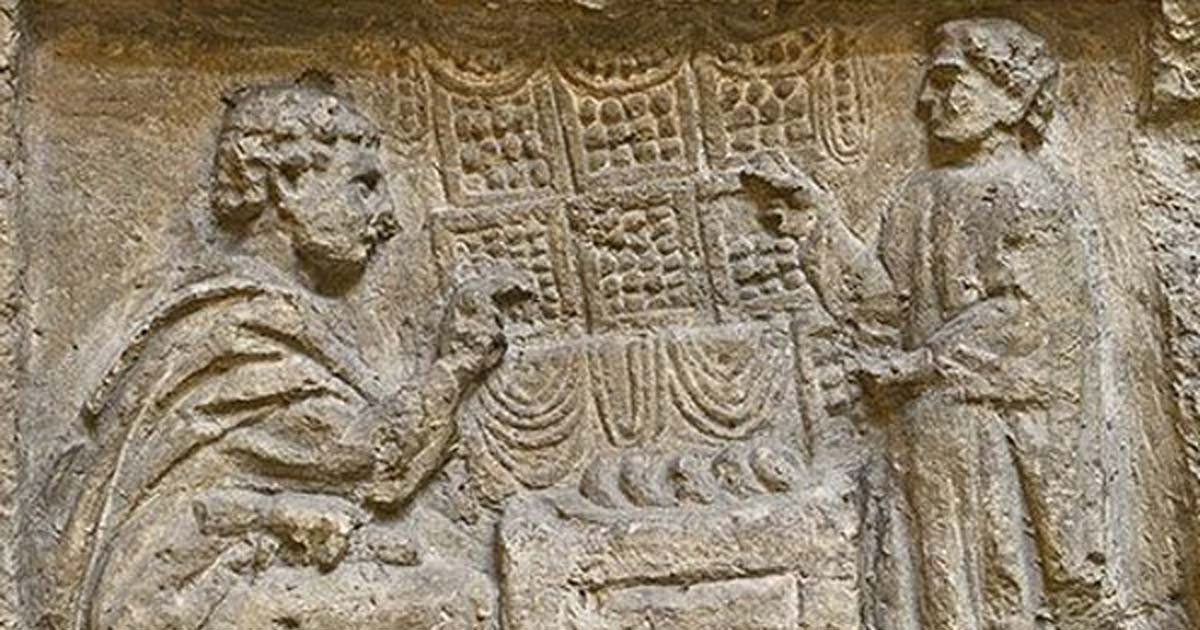 This this is impossible and recognizes the way human nature actually works.  The Potlatch system works in a similar way.  In exchange for real status within your natural community, you publicly give it all away and thus empower your community.  This is actually part of my protocol for ending poverty generally but an end and not a beginning.

It clearly worked well for the Athenians and to the point of sustaining an empire, though i am sure that tribute ruled then.

This may well have been the economic foundation of the Atlantean universe considering it nature.  It was particularly suited for private capitalism and the direct purchase of status.  .
.
.
Can You Imagine a Taxation System Where the Wealthy Competed to Pay the Highest Taxes? It Really Happened!

Can you imagine a progressive tax system that motivates the wealthiest members of society to voluntarily pay large amounts of tax instead of implementing tax avoidance schemes, as is currently the norm in most parts of the world? Welcome to the marvelous mechanisms of the ancient Greek economy.

An Introduction to the Ancient Greek Economy

Ancient Greek civilization flourished from around 776 to 30 BC. This long period of economic, cultural, and political domination didn’t just happen coincidentally, a lot of factors contributed to it. The ancient Greek economy—despite remaining somewhat of an enigma to this day—was definitely one of the main elements that played a crucial role in the country’s expansion and influence around the world.

The economy of ancient Greece was defined largely by the region’s dependence on imported goods since it lacked a consolidated, centralized economy in the modern sense of the word. The ancient Greek economy has been a topic of debate between historians and economists for quite some time now. On one side there are those who view it as “primitive” or even reactionary, and on the other are those who consider it “progressive and evolutionary.” As for the truth? As usually happens in such cases, it lies somewhere in the middle.

Undoubtedly, there are a lack of sophisticated terms to describe all the overarching systems of commerce and trade organization in the ancient Greek economy, while economics itself—in contrast with other subjects such as mathematics or philosophy, which have been exhaustively interpreted—was mainly understood in terms of the localized management of necessary goods. Despite these facts, the economist Murray Rothbard has argued that ancient Greek philosophers were fully concerned with matters that would today fall under the discipline of economic theory. 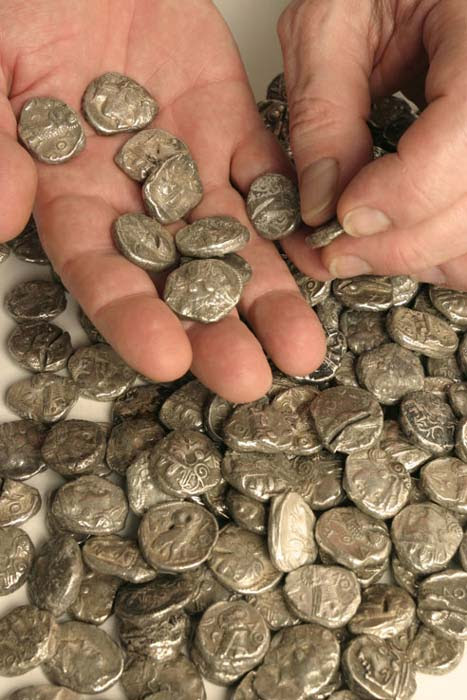 The Genius System of Taxation in Ancient Athens

While there are many inventions that the ancient Greeks gave to the modern world, one thing we certainly didn’t borrow from them was their taxation system. To be more specific, we are referring to the ancient Athenian tax system (as it’s not possible to know the taxation of every Greek city-state), which was based on a system of leitourgia, or liturgy, which meant “public service.” It might be hard to imagine this today, but in ancient Athens the richest of the rich literally competed to pay the most taxes, and the poor were treated to festivals and shows from that tax money. You are probably wondering why and how. Well, it’s not as complicated as you might think.

The wealthiest Athenian citizens and foreign residents (metoikoi) were challenged to fund public programs through the system of leitourgia. The state selected some to be gumnasiarkhai, who funded and maintained the public gymnasia. The khoregoi (sponsors) were the ones who funded the training of theatrical choruses, and the trierarkhoi funded triremes (warships) and their crews. Occasionally, a special tax called the eisforá was exacted, even though it’s recorded that by the fourth century BC the wealthiest citizens of Athens paid it annually. There were some exceptions, however, like the Peloponnesian War, during which all Athenians had to contribute as much as they could to the eisforá for the soldiers’ wages. 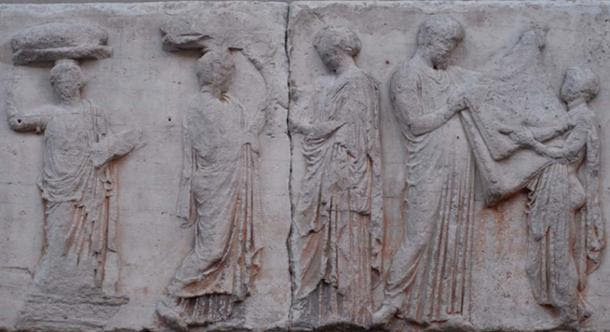 Block V of the eastern Parthenon Frieze, perhaps depicting the arrhephoroi, part of the liturgical calendar (CC by SA 3.0)

The beauty of the liturgy system was that public works tended to be funded and managed by people with relevant expertise rather than by some less accountable state official. These tasks came with great prestige, and even though it is unknown how they were exactly assigned, what we know is that the rich saw the whole thing as an unofficial Olympic “competition” where they competed against each other concerning who will donate the most, in order to gain higher status.

As a matter of fact, no more than a few hundred rich Athenians (some sources note three hundred) voluntarily paid the vast majority of the taxes, even though they did not pay them directly to the state. Instead, they made sure that the services required by society were fulfilled and that they were worshiped as great donors and sponsors, having paid their taxes directly to the programs that created and maintained these services. In other words, a rich Athenian had to prove his wealth with actions and for this he was revered by his fellow citizens. So, avoiding paying taxes—like the majority of rich Greeks do today—would not only have been shameful, but also an act that would have downgraded their public image and position in Athenian society. 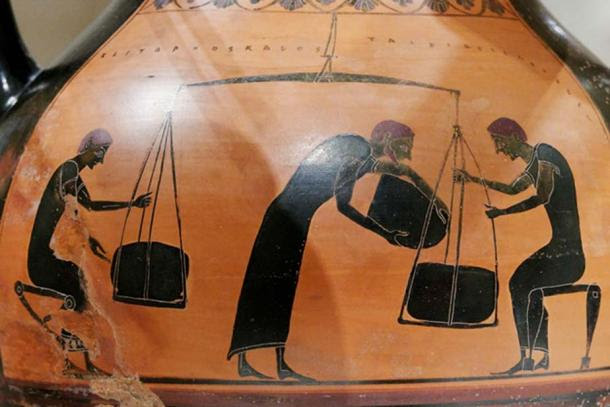 Men weighing merchandise. Side B of an Attic black-figure amphora. (CC by SA 2.5)

The Lesson Ancient Athenian Taxation Could Give Us Today

The theory behind ancient Athenian taxation was much deeper, of course. The wise elder Athenians who came up with the idea weren’t concerned about the wealthy citizens getting bragging rights by paying the city’s taxes, but instead they wanted to ensure that the rich wouldn’t attempt to find “tax shelters” to avoid paying taxes as happens today. Another factor was that the ancient Greeks viewed wealth as a matter of luck. In the absence of any organized industry and a capitalist economy that produces numerous millionaires, wealth tended to be inherited in ancient Athens.

In this way, aristocrats were constantly under pressure to show they were worth their inheritance through what they did for their city, while at the same time they had to show their appreciation to the gods for being born rich and pay for those who were born poor. Additionally, their reputation was on the line in the quality of the services they provided.

So the question is: How can the leitourgia system help modern countries, especially Greece, which has found itself in a precarious financial position for the past seven years? And how can the Greek government collect more taxes when a whopping 89.5 percent of the country’s tax receipts remain uncollected as a graphic published by the Washington Post depicts?  Personally, I can’t answer that since I am not an economist or a politician. However, I speculate that the problem is moral rather than economic or political. I will actually dare to say that the leitourgia wouldn’t have been very successful in ancient Athens if those wealthy Greeks were raised under and brainwashed by a modern capitalist system that encourages them to worship money rather than dignity, merit, and even posthumous fame, an ideal that as we all know the ancient Greeks valued more than anything.

Frisby, D. (2017). The genius way the Ancient Greeks taxed their citizens. The Week. Available at: http://theweek.com/articles/703720/genius-way-ancient-greeks-taxed-citizens
Posted by arclein at 12:00 AM