10 Incredible Weapons That Only America Has 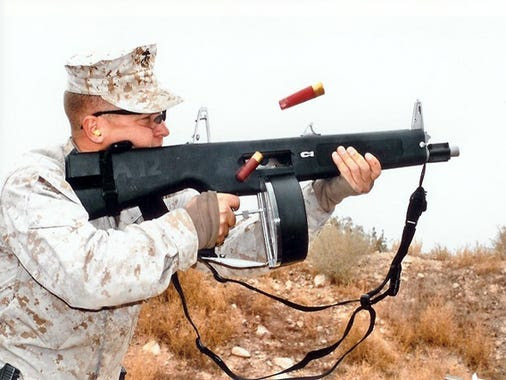 I notice some serious non lethal weapons are available now.  That is actually welcome and can be valuable even on the battlefield rather than only crowd control.  Particularly been able to blind oncoming threats.

This has long been desirable.  a temporarily blinded opponent is a liability to the opponent and way more demoralizing than a simple death which can inspires a hyperactive revenge.

However no one has really seen the laser gun yet mounted on a gravity spaceship..
\
.
10 Incredible Weapons That Only America Has
http://www.businessinsider.com/american-battlefield-weapons-2011-4/#mq9-reaper-drone-1

The Soviets exploded their first nuclear weapon in 1949. China revealed plans for its own stealth bomber last year.

But there are still some weapons the rest of the world doesn't have.

Weapons like the MQ9 Reaper Drone, the Laser Avenger and the MAARS Robot give U.S. troops the advantage on any battlefield around the world.

Some of these weapons have been around for several years but were recently modified, and some are still in production.
MQ9 Reaper Drone 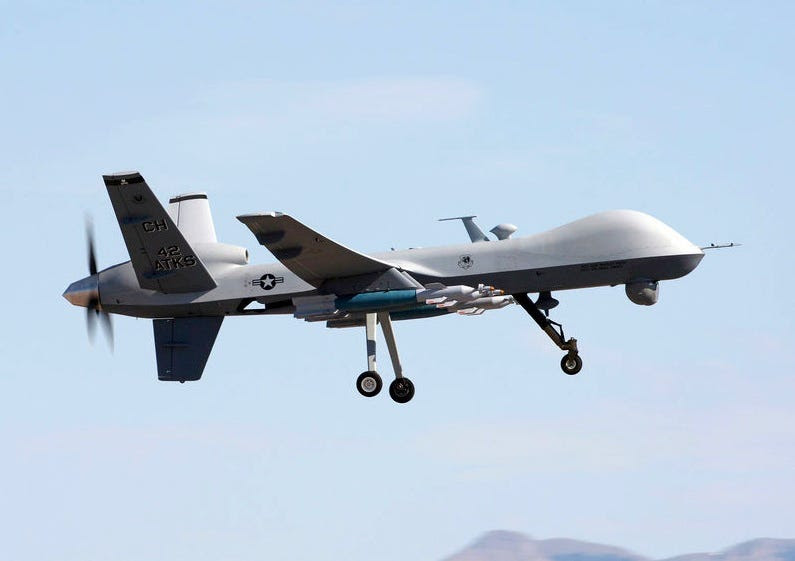 The Reaper has been around for over 10 years, but was used largely for intelligence and reconnaissance until recently.

Today, squadrons of F-16's are being transitioned into fully unmanned drone fleets.

The drone climbs up to 52,000 feet, and reads a license plate from over two miles away. Capable of carrying 500 pound bombs, air-to-ground, and air-to-air missiles the UAV fleet is poised to perform the lion's share of American air support.

As of March 2011 the Air Force has more personnel training to operate its burgeoning drone fleet than for any other weapon system in its arsenal.
AA12 Atchisson Assault Shotgun 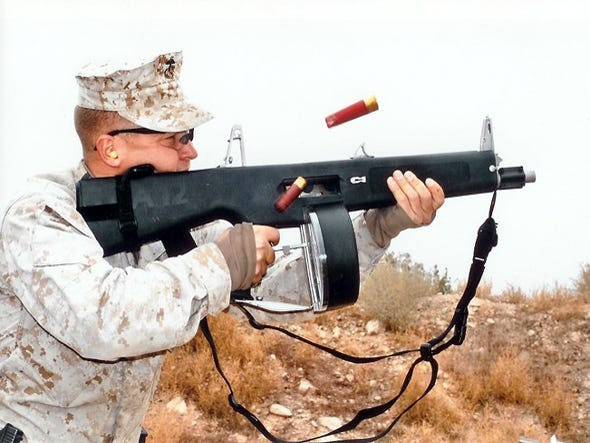 The AA12 can fire five 12-gauge shells per second and because the recoil is engineered at just 10 percent a normal shotgun, it can be fired from the hip with only one hand.

The Atchisson also fires a high explosive or fragmentation grenade called a FRAG-12 round to 175 meters with equal efficiency.

Designed for long-term combat use, tests have shown the AA12 can fire up to 9,000 rounds without being cleaned or jamming.

All the user needs to do is hold the trigger down for four seconds to empty the 20 round drum at a target.
PHASR Rifle 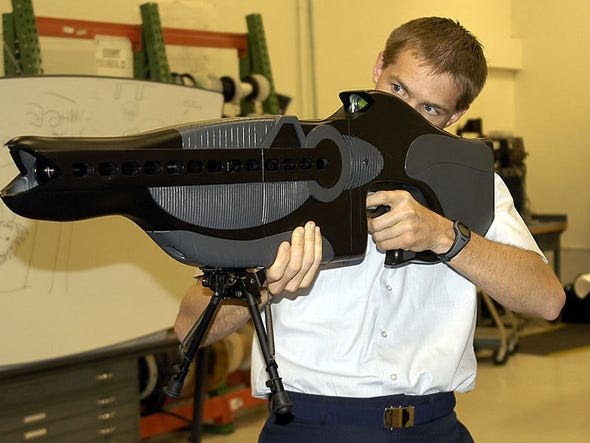 Manufactured by: the Department of Defense (DOD)
Release date: 2007

The Personnel Halting and Stimulation Response (PHASR) rifle is a handheld laser array, called a dazzler, capable of blinding and disorienting anyone caught in its sights.

While weapons to cause blindness were sagely restricted by the 1995 United Nations Protocol on Blinding Laser Weapons (a ruling the U.S. didn't agree to until 2009) the PHASR causes only temporary blindness, thus escaping the ban.

Dazzlers were originally mounted devices to U.S. soldiers rifles as a non-lethal way to halt Iraqis who failed to stop at checkpoints.

The PHASR uses a green laser array to calculate its targets distance and ensure its non-blinding intensity.
The Taser Shockwave 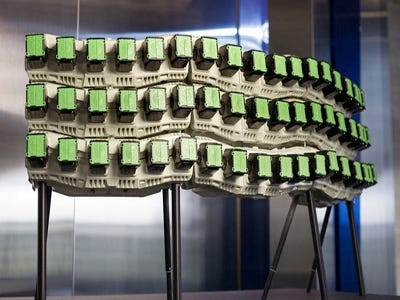 The Taser model will electrocute a crowd of people at the touch of a button.

Creating an "area of denial" the Taser can be stacked up and strung together almost indefinitely. It will also mount to any vehicle.

The Shockwave has an effective distance of 25 feet and can be seen in action on this company video at Gizmodo.
The Black Knight 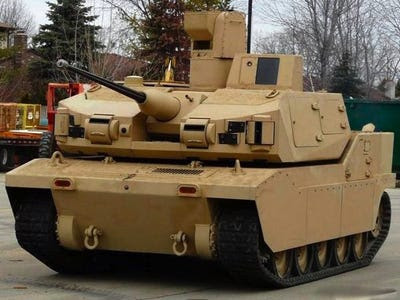 The Black Knight is a combination remote controlled tank and forward scouting vehicle, designed for situations too risky for manned vehicles.

To keep costs low, the Black Knight shares a weapons systems and engine parts with the manned Bradley Fighting vehicle. Including a 30mm cannon, machine gun and 300 horsepower engine.

The vehicle is also fitted with autonomous navigation software and can design and follow its own routes without input from an outside source.
The Active Denial System 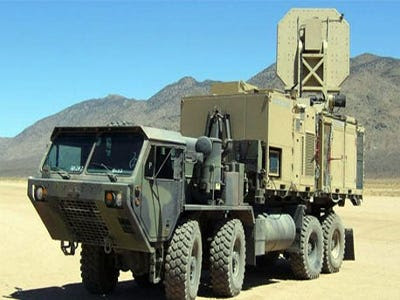 The ADS shoots a stream of electromagnetic waves, shorter than microwaves, which are instantly absorbed by the top layer of skin.

The pain is so intense, the reaction to run from the beams so overpowering, the military calls it the "Goodbye Weapon."

The ADS has been used domestically, both on test subjects and prison inmates. It was deployed to Afghanistan in 2010, only to be recalled, inexplicably, months later.

The military claims there are no lingering effects from exposure.
The Laser Avenger 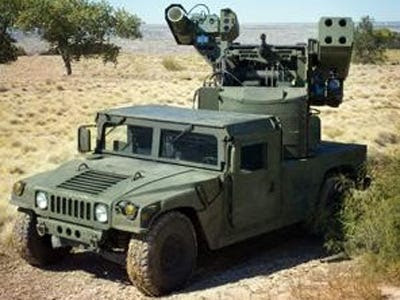 Only a few centimeters in diameter and invisible to the naked eye, the Avenger's laser is 20 times hotter than an electric stove top and will cut through artillery shells with ease.

The Avenger was designed with the hope of effectively detonating the Improvised Explosive Devices (IEDs) that inflict more damage on American forces than any other weapon.

Current disposal methods involve a version of the MAARS robot that insurgents will bomb to take out of action.

Only a few centimeters in diameter and invisible to the naked eye, the Avenger's laser is 20 times hotter than an electric stove top and will cut through artillery shells with ease.
The Avenger was designed with the hope of effectively detonating the Improvised Explosive Devices (IEDs) that inflict more damage on American forces than any other weapon.
Current disposal methods involve a version of the MAARS robot that insurgents will bomb to take out of action.
The Avenger is also being tested to take down aerial vehicles.
MAARS Robot (Modular Advanced Armed Robotic System) 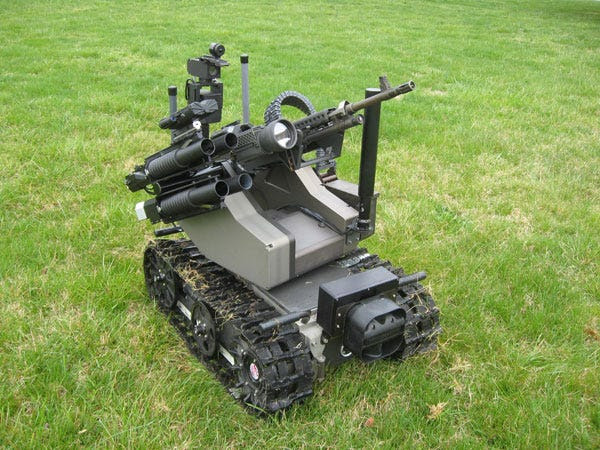 Customizable to various needs, the MAARS can be configured with either an MB240 machine gun and 40mm grenade launcher, or a loudspeaker and eye dazzling laser, or bean bag guns, smoke, and pepper spray.

To date, no shots have been fired in combat by a remote device like the MAARS.
XM2010 Enhanced Sniper Rifle 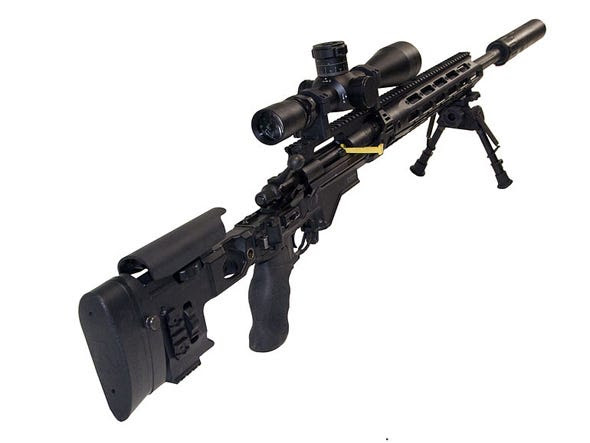 The product of a long string of modifications to the 22 year-old M24 sniper rifle, the XM2010 is designed specifically to be effective in the high altitude long distance fighting in Afghanistan.

To provide quiet, pinpoint accuracy at up to 1200 meters the XM2010 carries more gun powder in the bullets it fires, has a flash suppressor, sound suppressor, and a thermal sleeve to hide the warm barrel from FLIR.

When U.S. Snipers graduate from the five-week school at Fort Benning, Ga. they are capable of hitting a man-sized target nine out of ten times at 600 meters — over a third of a mile away.
XM25 Individual Airburst Weapon System (IAWS) 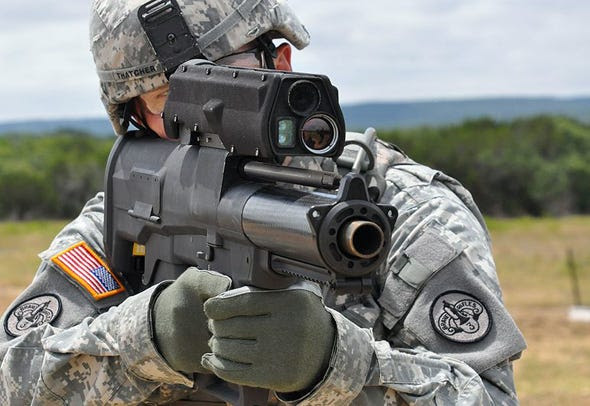 Dubbed "The Punisher" by American forces in Afghanistan, the XM25 accurately shoots a next-generation, 25mm, grenade up to 500 meters.

But, the distance isn't what impressed soldiers involved in the live trial of the weapon — it was the grenade programming.

A targets distance is transmitted by a rangefinder in the XM25 to the grenade in the firing chamber. When the grenade leaves the barrel it is spiraling, like a football, and measures the distance it's traveled by the number of spirals it completes.

The detonation can be manually programmed within 10 meters to hit enemy in bunkers or behind barriers.

A platoon leader commented in an Army Times article: "Engagements that typically take 15 to 20 minutes were over in a matter of minutes.”
Posted by arclein at 12:00 AM