Figuring Out The Kennedy Assassination, Part 1 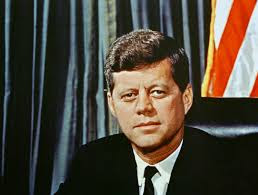 I have posted extensively on this topic and have come to a clear understanding that Oswald was the go to patsy needed to shield the perpetrators from too enthusiastic police attention. That has tended to let me largely ignore the actual Oswald story itself except to note that he was most certainly a CIA asset with all the intricacy that entails.

The actual assassination was pulled off by drawing the motorcade into a kill box that had at least three sniper teams set up.  The chancy location but the best  location was head on behind the so called grassy knoll.  As it was, that worked best.  He likely would have survived the rest.

This item fills in a lot more detail on Oswald and the actual background of events.  JFK's great misfortune was that he was a career politician first and foremost with scant street sense.  His father had been felled by a stroke at the very beginning of his presidency and was in no position to ever properly advise on that.  JFK understood that much needed to change, but then made speeches about it rather than act first and explain last.

I so not seeing Trump ever making that mistake.

Figuring Out The Kennedy Assassination, Part 1

The Future of Freedom Foundation

FIGURING OUT THE KENNEDY ASSASSINATION, PART 2