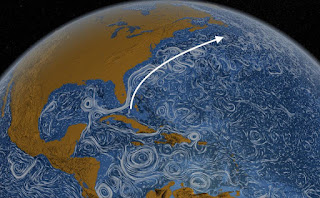 I do think that all this is subject to a long cycle that operates through one thousand or so years.   During this time span, the southern circumpolar current has a high and low point that sets the schedule for the thousand years.  That high and low affects the strength of the Atlantic cycles. all this leads to unusual effects in the Arctic that must include the recent warm spell that now compares to the medieval warm spell or at least its beginning.


Such a natural cycle is driven by the warming of the Pacific and its counter decline.

So far all this is sufficient to explain all the variation we have experienced during the Holocene.

..
Global Ocean Circulation Appears To Be Collapsing Due To A Warming Planet

A recent study published in Nature outlines research by a team of Yale University and University of Southhampton scientists. The team found evidence that Arctic ice loss is potentially negatively impacting the planet's largest ocean circulation system. While scientists do have some analogs as to how this may impact the world, we will be largely in uncharted territory.

AMOC is one of the largest current systems in the Atlantic Ocean and the world. Generally speaking, it transports warm and salty water northward from the tropics to South and East of Greenland. This warm water cools to ambient water temperature then sinks as it is saltier and thus denser than the relatively more fresh surrounding water. The dense mass of water sinks to the base of the North Atlantic Ocean and is pushed south along the abyss of the Atlantic Ocean. 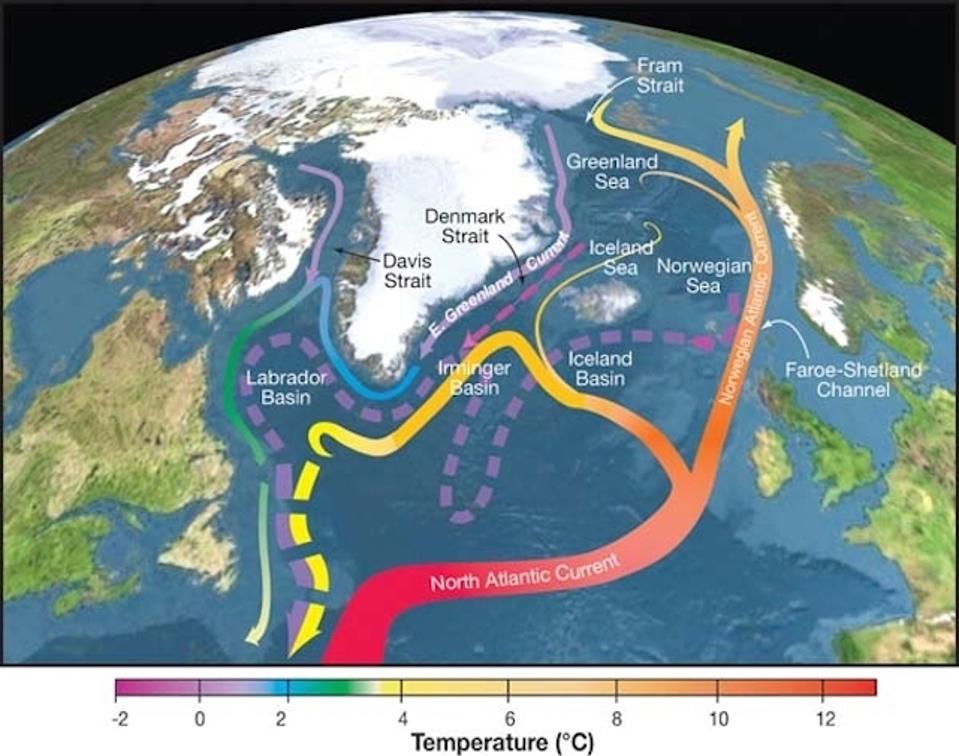 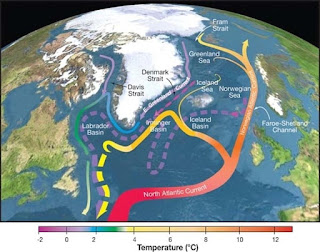 Wikipedia
Schematic of the Atlantic meridional overturning circulation
This process whereby water is transported into the Northern Atlantic Ocean acts to distribute ocean water globally. What's more important, and the basis for concern of many scientists is this mechanism is one of the most efficient ways Earth transports heat from the tropics to the northern latitudes. The warm water transported from the tropics to the North Atlantic releases heat to the atmosphere, playing a key role in warming of western Europe. You likely have heard of one of the more popular components of the AMOC, the Gulf Stream which brings warm tropical water to the western coasts of Europe.

Evidence is growing that the comparatively cold zone within the Northern Atlantic could be due to a slowdown of this global ocean water circulation. Hence, a slowdown in the planet's ability to transfer heat from the tropics to the northern latitudes. The cold zone could be due to melting of ice in the Arctic and Greenland. This would cause a cold fresh water cap over the North Atlantic, inhibiting sinking of salty tropical waters. This would in effect slow down the global circulation and hinder the transport of warm tropical waters north. 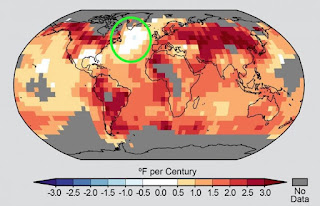 NOAA
Measured trend in temperature variations from 1900 to 2012.

Melting of the Arctic sea ice has rapidly increased in the recent decades. Satellite image records indicate that September Arctic sea ice is 30% less today than it was in 1979. This trend of increased sea ice melting during summer months does not appear to be slowing. Hence, indications are that we will see a continued weakening of the global ocean circulation system.

This scenario of a collapse in AMOC and global ocean circulation is the premise for the movie "The Day After Tomorrow." As a disclaimer, the plot line in which much of New England and Western Europe gets plunged into an ice age is significantly over exaggerated and unrealistic on human time scales.

While geologists have studied events in the past similar to what appears to be happening today, scientists are largely unsure of what lies ahead.
Posted by arclein at 12:00 AM

A couple of thoughts : Arctic temperatures spiked at the start of winter, suggesting heating of water by circulation or vulcanism. May 2010 was the first time I saw notes on the breakup of the Mid Atlantic conveyor by an Italian scientist. Interestingly, this roughly coincided with large oil slick coverage of the Gulf of Mexico due to the Macondo Prospect blowout of Deepwater Horizon, which was dispersed by radical application of Corexit 9500 by the US Coast Guard. Graft and corruption are indicated as explanation of the selection of such a known biohazard agent, which killed rotifers at the base of the food chain at the rate of 54x the toxicity of crude oil alone. While doing that, it managed to kill microbial life which would break down crude and destabilize underwater deposits.