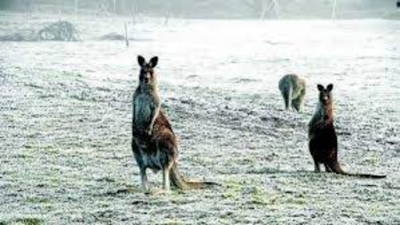 Fortunately this has not gone on for years and it got caught early and was then fixed.  What were they thinking?  This is not data for which an artificial floor is inconsequential.  It could even be dangerous in the wrong place as anyone who has experienced minus sixty is well aware.  The margins become real narrow there.

It is really odd considering just how controversial real measurements have become with heat island effects.

Yet it does remind us that we are vulnerable to real error at the programing level conducted by non specialists in most cases in most fields.
.

Recorded temperatures at the Bureau­ of Meteorology’s Thredbo Top automatic weather station have dropped below -10C in the past week, after action was taken to make the facility “fit for ­purpose”.

A record of the Thredbo Top station for 3am on Wednesday shows a temperature reading of -10.6C. This compares with the BoM’s monthly highlights for June and July, both showing a low of -9.6C.

The BoM said it had taken immed­iate action to replace the Thredbo station after concerns were raised that very low temperatures were not making it onto the official record. Controversy has dogged the bureau’s automatic weather station network since Goulburn man Lance Pigeon saw a -10.4C reading on the BoM’s website on July 2 automatically adjust to -10C, then disappear.

Later independent monitoring of the Thredbo Top station by scientist Jennifer Marohasy showed a recording of -10.6C ­vanish from the record.

BoM initially claimed the adjustments were part of its quality control procedures. But bureau chief executive Andrew Johnson later told Environment Minister Josh­ Frydenberg that investigations had found a number of cold-weather stations were not “fit for purpose” and would be replaced.

The BoM has admitted that, in addition to Goulburn and Thredbo Top, stations at Tuggeranong i

An in-house investigation that includes two independent experts has been called. The bureau said it rejected allegations aired in some media outlets that it had sought to tamper with temperature data.

It has been reported online that electronic smart cards were allegedly fitted to the BoM’s automatic weather stations, which put a limit on how low temperatures could be recorded in official weather data. The BoM declined to comment ahead of the internal review.

“The findings of a review into this matter will be made available after completion,” a BoM repre­sentative said. “We do not intend to publish detail prior to that.

“The AWS program is part of the observing systems and operations program, separate from the climate areas.”

On her website yesterday, Dr Marohasy said it was not the recording­ devices that were at fault. “To be clear, the problem is not with the equipment; all that needs to be done is for the smart-card readers to be removed,” Dr Marohasy said.

“So that after the automatic weather stations measure the correct­ temperature, this temp­erature can be brought forward firstly into the daily weather observation sheet and subsequently into the CDO (climate data online) dataset.”

Mr Frydenberg rejected any suggestion that he had prior knowledge of smart cards or the cause of problems which made the stations not fit for purpose. He said he only learnt of the issue with the weather station readings when it was raised by The Australian.
Posted by arclein at 12:00 AM

The human tendency, among those who have accepted, accumulated or arrogated power, is to protect it at all costs. That is true even in the case of the minor power of a record keeper, whose records have been twisted to 'prove' a theory that has come to have value to tyrants. Man-made climate change that should trigger violent reaction is only a more recent example.