Chased by Bigfoot on Brown Mountain 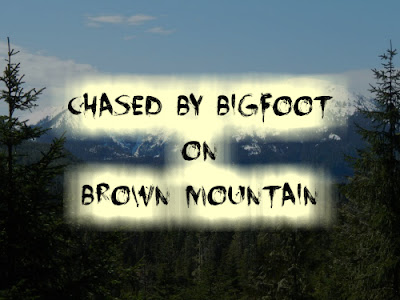 Firstly the speed is not unusual at all.  We can do 45 km and assuming a similar turnover rate along with a stride that is likely twice as large, then top speed may be 90 km.  Thus 40 mph would be sustainable here for the short distance run of only several minutes.


He then stopped and simply watched which suggests curiosity mostly as well as catching up his breath..  Plenty of critters will chase a car so nothing special to be taken away there.  What is surprising is that we have never seen this before.

What this does confirm is that this creature can not only walk like a man, but can also run like a man for several miles and likely much faster.  This does mean that a lot of Olympic records will be smashed by human eight foot runners which will arise soon enough..

Chased by Bigfoot on Brown Mountain

It's been a very slow news day, so I decided to post the following eyewitness account...and then added the daily links at the end.

Author Robert Alley appeared on Bigfoot Tonight Show in 2013 and told of frightening encounter a friend of his had on Brown Mountain, Alaska:


“A fellow firefighter who moved to Anchorage that was a friend had a surprising encounter with his wife and his buddy and his buddy's wife on two quads. They were on two ATVs and it was on Revilla Island about 12 miles north of Ketchikan and it was the bottom of the Brown Mountain Road and it was the scene of a pretty hair raising encounter with what really seems to have been an irate Sasquatch which reportedly chased these two couples who were four wheeling down Brown Mountain in August two years ago, that's August 2011 and, I'll just call him, Curtis, he's a personable 27 year old Ketchikan outdoorsman. He's moved up to Anchorage now and he worked here in retail and did EMT and firework firefighting in his off hours and he was able to give these details which I corroborated with the other witnesses.

The evening of August 26, 2011, I was with my girlfriend and another couple on two 4 wheelers. We were having an evening ride on the Brown Mountain Road to the top of the clear cut that's 3000... that's up near, maybe 1,500 feet, we had parked our trucks around 8 PM at the paintball gravel quarry halfway along the road that's still closer to sea level some miles away and we rode our four-wheelers to Harriet Hunt Lake and all around the area before going up the Brown Mountain Road sometime around 11 PM, up to the top of the mountain for awhile then back down. It wasn't raining and we had moonlight so we just kept riding until 11:45 PM and then turned around to come back down. My friends were ahead of us and we were just trying to see how far down the road we could coast in neutral. My girlfriend and I, who is his wife now, just passed the campsite by the bridge and creek near the bottom of the road when I thought I heard footsteps running down the road behind us and then my girlfriend looked around and said, 'Something's chasing us!'

[ he was running quiet and the Sasquatch could be heard  running, but even that is unusual.  The foot must plop at the least. arclein ]


I kicked the quad into gear and accelerated to over 40 miles per hour but I could hear that it was still following us. It was fast, that's for sure. Well, he continued, it was just near the bottom of the road where the Brown Mountain Road meets the White River Road that I made a quick decision to slow down a bit to be able to make the turn and touch the brakes slightly and take a quick look behind us in the brake-light to see what I could. It was only about 20 feet or so behind us and I was kind of shocked that the thing was as tall as it was. It was not a bear, seven feet tall and heavily built. Here my machine does 60 at the top and I pegged it after the corner, he said, I passed my friend on his machine. His machine does 70 and we raced the 7 minutes back to the quarry to load up and leave quick, you know, I just, at this point, I just want to add with Tanner (the friend) he had no idea at this point what was going on, only that Curtis and his fiance or his girlfriend we're tearing past him. On the way, I could hear our girlfriend's voices over the engines urging us to go faster. I pulled up just 10 seconds behind him. Tanner weighs 260 pounds and he was lifting his 300-pound machine onto the open bed of his truck by himself and as soon as I pulled up, he was helping me. Well, while we were loading my four wheeler onto my truck, our girlfriends had taken my small tactical flashlight and they've been shining it back down the road where we come and all around and, he said, I believe they were both talking about what we'd seen chasing us and I heard the word Bigfoot. As they shown the light, I noticed three surprising things.


First, he said, there was a big black bear in the paintball part of the quarry, the local paintball club uses it, about 35 yards away, and there was another, this is quite remote, and there was another smaller bear less than 20 yards away, these are both black bears, coming slowly out of the bush on our side of the road. That would have been close to a valley drop-off that goes down 500 feet at the edge of the drop off to the valley in the east. At that moment, I was still trying to strap my quad onto the truck bed and Tanner and our girlfriends were standing right beside me they were scanning the beam back and forth when I heard some kind of gravel noise down the road and the girls screamed. I looked in the direction of the beam and I was really shocked to see a tall heavy shape standing in the middle of the road about 40 yards back, the way we'd come. It was right on the road in front of a big waterfall area. It was exactly the size and shape of the thing that had chased us down the Brown Mountain Road. About 7 feet tall. But it would have had to have been running 40 to 45 miles an hour to have got to where we were loading. I measured it out myself later, you know, 3.5 miles... it was really... it all matched. Well, the data confirmed it. When the light hit it, it dropped to a football player stance. It was kind of bobbing up and down with one hand on the road and the other on its knee.

At that time, the smaller black bear behind us that had just come out of the bush, turned around and took off back into the bush, over the edge like, I want to get out of here! Everything was happening all at once. As the girls turned for the truck, I could see the beam hit the big bear in the paintball area and it was going crazy knocking barrels over and crashing into things trying to get away from us or the big flipping thing. So Curtis summed it up, he said, the girls jumped in the trucks and they were yelling at us to get in and both Tanner and I started to drive off. In almost the same second Tanner had to stop for 10 seconds to throw his ramps in the back and I look back to see the thing, but there wasn't enough light, and I was focusing on getting out of there. We didn't stop at all.

On the way back my girlfriend and I talked about it. We both agree that it had to have been a Bigfoot we saw. We talked with Tanner and his girlfriend back in Ketchikan and they agreed. That was it, he told me. I'll be back there for deer hunting and I'll be carrying a camera he said. What happened to us may sound amazing but those are the straight facts as best as I can I describe them, he says. I've seen documentaries of Sasquatches on television and you have to say that the creature observed there twice the evening of August 26 matched the general description of a Bigfoot.”
Posted by arclein at 12:00 AM