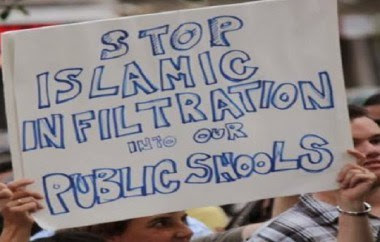 If this happens to be true, then the US educational system has been hijacked in an effort to work against our interests.  It cannot be sustained but it is another symptom of the underlying natural Fascism in Islam.

The counter movement is developing as well and will certainly prevail, not least because it has crystallized around the Trump movement.  That parents are now engaged and reading their children's textbooks is obviously overdue.

In the end, i know we will prevail, not least because the money will soon be cut off.   These are end days for the oil dream that has nicely disclosed human intentions globally..

New Truth Behind the Common Core Movement Revealed: Financed by Saudi Arabia! Want to Know Why?

The purpose is to influence school teachers to adopt new textbooks that extol the virtues of Islam.

Shocked by the lesson plans that developed as a result of the seminar, Stotsky said:

They ranged from having students make prayer rugs; describe what it would be like to go on a hajj–a pilgrimage; learn and memorize the five pillars of Islam; listen to and learn how to recite passages from the Koran; dress like a Muslim from a particular country. It was, to me, a clear violation of ethics involved in how one would expect children to learn about another culture. That they would literally go through the memorization and the learning of religious beliefs.

*********
Common Core is a fraud of epic proportion. Children will learn that Islam is a natural and acceptable religion for American children and better than Christianity.

All bought a paid for by the Saudis who have been closely aligned by another who was financed by them—our current POTUS!

As CBN reported, Harvard is one of about 18 universities that receive government funds under Title VI of the Higher Education Act of 1965. To receive the funding, the universities must perform outreach to K-12 teachers.

Additionally, however, CBN reported the Saudi government donated millions of dollars to Middle East Centers at universities that received the Title VI funds. Both the Harvard Center for Middle Eastern Studies Center and Georgetown University each received a $20 million donation from Saudi Prince Alwaleed bin Talal in 2005.

The outcome is that through the U.S. taxpayer-funded Title VI university centers, Saudi-funded “lesson plans” made their way into America’s K-12 classrooms.

“Common Core is changing the way Americans think of themselves,” she said. “There is no connecting the dots, no context in teaching history now – everything is disconnected.”

Hearne says the controversial math and English standards reflect teaching that is not based on logic.

“Children’s brains are no longer trained logically,” she explains. “In math, traditionally we have laid down a knowledge base and then built on it until it becomes automatic. The same with grammar and English as traditional and classic education, but not so now.”

The former teacher adds that the revisions made in the Advanced Placement U.S. History (APUSH) framework promote a similar message to students.

“The thrust of the movement in terms of American history that has led up to Common Core is that there is no greatness about America,” Hearne said and continued:

The underlying premise is that there is a moral equivalence between cultures. This has been around for years, but Common Core has raised the flag and parents are now engaged. Prior to Common Core, parents had never really read their children’s textbooks. I’m excited parents are finally getting more involved in their children’s education.
Posted by arclein at 12:00 AM