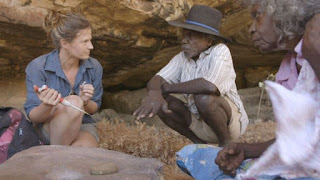 Very good. this locks it all down and we have modern humanity operating at 65000 BP in both Australia and Africa and by reasonable inference all in between as well.  At least in terms of the tropics.  Other biomes may well have demanded much more adaptation and that may have been slower coming even with humans next door.

Most certainly we have the direct cause of the loss of slow reproducing mega fauna everywhere.

Restoration globally of such mega fauna in Refugio will be a human mission over the next two centuries.  Hopefully is will be as easy as simply stepping back in time and collecting.

With full human engagement all our lost biomes can be recreated in designed refuges that keep the rats out in particular..

From the section Australia
http://www.bbc.com/news/world-australia-40651473

Archaeologists have found the first evidence to suggest that Aboriginal people have been in Australia for at least 65,000 years.

The discovery indicates their arrival on the continent was up to 18,000 years earlier than previously thought.

It was made after sophisticated artefacts were excavated from a rock shelter in the Northern Territory.

Researchers unearthed what they say are the world's oldest stone axes and ochre crayons, thought to be used for art.

The research, which has been peer-reviewed, was published in the journal Nature.

It is based on findings at the Madjedbebe shelter, near Kakadu National Park.

How does this change things?

Australian Aborigines are believed to be the world's oldest continuous civilisation.

However, there has been debate among scientists about when they arrived, with an estimate of between 47,000 and 60,000 years ago. They would have made sea journeys from the islands of South-East Asia at a time when water levels were much lower.

The lead author of the new research, Associate Prof Chris Clarkson, from the University of Queensland, said: "We have managed to establish a new age for first occupation in Australia and pushed it back by about 18,000 years beyond what was the previous established age of about 47,000 years."

Researchers worked with the agreement of the traditional owners of the area near the Kakadu National Park He added: "This has huge implications for everything from the out-of-Africa story to the extinction of megafauna and Aboriginal peoples' own knowledge of how long they have been in this country."

The out-of Africa theory postulates on when humans first left Africa. The dates there have also been hugely debated and have ranged from between 60,000 and 100,000 years. What this new research does is push up the bottom of that range to 65,000 years.

It also confirms that humans would have arrived before the extinction of Australian megafauna such as a type of giant wombat and a giant carnivorous goanna.

A graphic in the Sydney Morning Herald put the new timeframe in perspective, saying that if Aboriginal culture were taken to be 24 hours long, the First Fleet of European settlers in 1787 would have arrived at 23:54 and 56 seconds.

What dating techniques did the new research use?

Radiocarbon dating was used on charcoal samples but this has a limit of about 50,000 years.

To go beyond that, the team used the method of optically stimulated luminescence (OSL).

It is used on buried material, measuring the time that has elapsed since mineral grains were last exposed to sunlight. It was used to date some 28,500 individual grains of sand.

This led to a far more accurate timeframe than was previously known.

So what artefacts were discovered?

The rare artefacts found in the dense lowest layer of the Madjedbebe shelter indicate an "innovative and dynamic early Aboriginal occupation of Australia", Assoc Prof Clarkson told the BBC.

Ground-edge stone axes were unearthed during the excavation "We found these beautiful ground stone-edge axes with grooves at one end where the handle would have been attached with resin," he said.

The team found pieces of reflective art minerals such as mica wrapped around ground ochre, along with a slab covered in red ochre that was mixed with mica.

"It really tells us that people were heavily into artistic activity," Associate Prof Clarkson said.
What is the Madjedbebe area?

The traditional owners of the area are the Mirrar people.

Their interests are represented by the Gundjeihmi Aboriginal Corporation, which struck a deal with the researchers over the latest dig.

Mirrar people worked alongside archaeologists at Madjedbebe, helping with the excavation and curation of the material.

Since the 1970s, the Northern Territory rock shelter has been excavated four times, with more than 10,000 artefacts found in the lowest layer of the site.

Gundjeihmi Aboriginal Corporation head Justin O'Brien said that the latest research "shatters previous understandings of the sophistication of the Aboriginal toolkit".
Posted by arclein at 12:00 AM