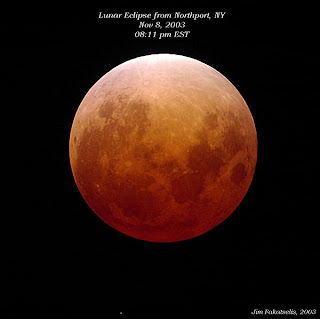 1378 AD was the last time that a lunar eclipse fell on the winter solstice, so for that this is something special.  Otherwise enjoy the fresh air, take in the eclipse and also look at the stars in the winter sky.  If you are really lucky, you are far from a city.  That is the one thing that I miss from my own childhood on a farm in .

It will be the full deal for , so do take it in.

I look forward to the day when this can be observed from the moon itself where it will be even more spectacular.

Dec. 17, 2010:  Everyone knows that "the moon on the breast of new-fallen snow gives the luster of mid-day to objects below."

That is, except during a lunar eclipse.

See for yourself on Dec. 21st, the first day of northern winter, when the full Moon passes almost dead-center through Earth's shadow. For 72 minutes of eerie totality, an amber light will play across the snows of , throwing landscapes into an unusual state of ruddy shadow.

If you're planning to dash out for only one quick look -­ it is December, after all -­ choose this moment: 03:17 am EST (17 minutes past midnight PST). That's when the Moon will be in deepest shadow, displaying the most fantastic shades of coppery red.

From first to last bite, the eclipse favors observers in . The entire event can be seen from all points on the continent. Click to view a world map of visibility circumstances. Credit: F. Espenak, NASA/GSFC.

A quick trip to the Moon provides the answer: Imagine yourself standing on a dusty lunar plain looking up at the sky. Overhead hangs Earth, nightside down, completely hiding the sun behind it. The eclipse is underway. You might expect Earth seen in this way to be utterly dark, but it's not. The rim of the planet is on fire! As you scan your eye around Earth's circumference, you're seeing every sunrise and every sunset in the world, all of them, all at once. This incredible light beams into the heart of Earth's shadow, filling it with a coppery glow and transforming the Moon into a great red orb.

Back on Earth, the shadowed Moon paints newly fallen snow with unfamiliar colors--not much luster, but lots of beauty.
Enjoy the show.