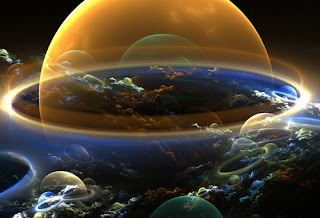 Freely translated, we know nothing, but are able to winkle out patterns with a low degree of confidence.

Suppose some form of lensing event took place between the target area in the sky and the observing scope.  How might this affect observations?  Are we in fact detecting an important phenomenon between ourselves and this portion of the sky?  Is this replicated elsewhere in the sky?

Obviously this has everyone chattering and it is inspiring speculation.  The microwave background is isotropic and finding variation is what science does.  That we may even have a pattern is interesting and may establish and important axis or heaven forbid, a frame of reference.

Let us look elsewhere to see if other such patterns exist and if it means anything.

No evidence of time before Big Bang
Latest research deflates the idea that the Universe cycles for eternity.

Circular ripples in the cosmic microwave background have been making waves with theoreticians.NASA

Our view of the early Universe may be full of mysterious circles — and even triangles — but that doesn't mean we're seeing evidence of events that took place before the Big Bang. So says a trio of papers taking aim at a recent claim that concentric rings of uniform temperature within the cosmic microwave background — the radiation left over from the Big Bang — might, in fact, be the signatures of black holes colliding in a previous cosmic 'aeon' that existed before our Universe.

The provocative idea was posited by Vahe Gurzadyan of Yerevan Physics Institute in and celebrated theoretical physicist Roger Penrose of the of , . In a recent paper1, posted on the arXiv preprint server, Gurzadyan and Penrose argue that collisions between supermassive black holes from before the Big Bang would generate spherically propagating gravitational waves that would, in turn, leave characteristic circles within the cosmic microwave background.

To verify this claim, Gurzadyan examined seven years' worth of data from NASA's Wilkinson Microwave Anisotropy Probe (WMAP) satellite, calculating the change in temperature variance within progressively larger rings around more than 10,000 points in the microwave sky. And indeed, he identified a number of rings within the WMAP data that had a temperature variance that was markedly lower than that of the surrounding sky.
Cosmic cycle
Most cosmologists believe that the Universe, and with it space and time, exploded into being some 13.7 billion years ago at the Big Bang, and that it has been expanding ever since. A crucial component of the standard cosmological model — needed to explain why the Universe is so uniform — is the idea that a fraction of a second after the Big Bang, the Universe underwent a brief period of extremely rapid expansion known as inflation. 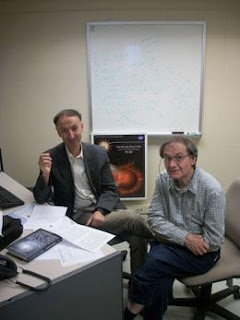 Penrose, however, thinks that the Universe's great uniformity instead originates from before the Big Bang, from the tail end of a previous aeon that saw the Universe expand to become infinitely large and very smooth. That aeon in turn was born in a Big Bang that emerged from the end of a still earlier aeon, and so on, creating a potentially infinite cycle with no beginning and no end.

Now Gurzadyan and Penrose's idea is being challenged by three independent studies, all posted on the arXiv server within the past few days, by Ingunn Wehus and Hans Kristian Eriksen of the University of Oslo2; Adam Moss, Douglas Scott and James Zibin of the University of British Columbia3 in Vancouver, Canada; and Amir Hajian of the Canadian Institute for Theoretical Astrophysics in Toronto, Ontario4.

All three groups reproduced Gurzadyan's analysis of the WMAP data and all agree that the data do contain low-variance circles. Where they part company with the earlier work is in the significance that they attribute to these circles.
Circles of significance
To gauge this significance, Gurzadyan compared the observed circles with a simulation of the cosmic microwave background in which temperature fluctuations were completely scale invariant, meaning that their abundance was independent of their size. In doing so, he found that there ought not to be any patterns. But the groups who are critical of his work say that this is not what the cosmic microwave background is like.

They point out that the WMAP data clearly show that there are far more hot and cold spots at smaller angular scales, and that it is therefore wrong to assume that the microwave sky is isotropic. All three groups searched for circular variance patterns in simulations of the cosmic microwave background that assume the basic properties of the inflationary Universe, and all found circles that are very similar to the ones in the WMAP data.
Moss and his colleagues even carried out a slight variation of the exercise and found that both the observational data and the inflationary simulations also contain concentric regions of low variance in the shape of equilateral triangles. "The result obtained by Gurzadyan and Penrose does not in any way provide evidence for Penrose's cyclical model of the Universe over standard inflation," says Zibin.
Gurzadyan dismisses the critical analyses as "absolutely trivial", arguing that there is bound to be agreement between the standard cosmological model and the WMAP data "at some confidence level" but that a different model, such as Penrose's, might fit the data "even better" " — a point he makes in a response to the three critical papers also posted on arXiv5. However, he is not prepared to state that the circles constitute evidence of Penrose's model. "We have found some signatures that carry properties predicted by the model," he says.