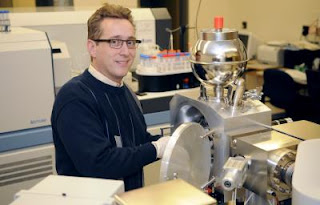 It is neat that we can still refine the mensuration used for atomic weight on the periodic table for these ten elements.  They all have an isotopic history that is affected for external factors enough to introduce a lot of uncertainty.

In a couple of years you will be justified in getting an up to date periodic table, though that has been common place enough if one was in the habit of adding transuranic elements as they emerged from the laboratories.

That this was needed was obvious for some time.  It is likely the methodology has simply improved to the point that it is good enough to do the job for a long time.

Enlarge
Michael Wieser is a scientist from the who is helping to update periodic table. Credit: Riley Brandt/University of

For the first time in history, a change will be made to the atomic weights of some elements listed on the Periodic table of the chemical elements posted on walls of chemistry classrooms and on the inside covers of chemistry textbooks worldwide.

The new table, outlined in a report released this month, will express atomic weights of 10 elements:

in a new manner that will reflect more accurately how these elements are found in nature.

"For more than a century and a half, many were taught to use standard atomic weights — a single value — found on the inside cover of chemistry textbooks and on the periodic table of the elements. As technology improved, we have discovered that the numbers on our chart are not as static as we have previously believed," says Dr. Michael Wieser, an associate professor at the University of Calgary, who serves as secretary of the International Union of Pure and Applied Chemistry's (IUPAC) Commission on Isotopic Abundances and Atomic Weights. This organization oversees the evaluation and dissemination of atomic-weight values.

Modern analytical techniques can measure the atomic weight of many elements precisely, and these small variations in an element's atomic weight are important in research and industry. For example, precise measurements of the abundances of isotopes of carbon can be used to determine purity and source of food, such as vanilla and honey. Isotopic measurements of nitrogen, chlorine and other elements are used for tracing pollutants in streams and groundwater. In sports doping investigations, performance-enhancing testosterone can be identified in the human body because the atomic weight of carbon in natural human testosterone is higher than that in pharmaceutical testosterone.

The atomic weights of these 10 elements now will be expressed as intervals, having upper and lower bounds, reflected to more accurately convey this variation in atomic weight. The changes to be made to the Table of Standard Atomic Weights have been published in Pure and Applied Chemistry and a companion article in Chemistry International.

For example, sulfur is commonly known to have a standard atomic weight of 32.065. However, its actual atomic weight can be anywhere between 32.059 and 32.076, depending on where the element is found. "In other words, knowing the atomic weight can be used to decode the origins and the history of a particular element in nature," says Wieser who co-authored the report.

Michael Wieser, a professor at the University of Calgary, is contributing to changes to the periodic table. He works with a thermal ionization mass spectrometer used to measure the isotope abundance of an element. Credit: Riley Brandt/University of

Elements with only one stable isotope do not exhibit variations in their atomic weights. For example, the standard atomic weights for fluorine, aluminum, sodium and gold are constant, and their values are known to better than six decimal places.

"Though this change offers significant benefits in the understanding of chemistry, one can imagine the challenge now to educators and students who will have to select a single value out of an interval when doing chemistry calculations," says Dr. Fabienne Meyers, associate director of IUPAC.

"We hope that chemists and educators will take this challenge as a unique opportunity to encourage the interest of young people in chemistry and generate enthusiasm for the creative future of chemistry."

The has and continues to contribute substantially in the study of atomic weight variations. Professor H. Roy Krouse created the Stable Isotope Laboratory in the Department of Physics and Astronomy in 1971. Early work by Krouse established the wide natural range in the atomic weight of significant elements including carbon and sulfur. Currently, researchers at the in physics, environmental science, chemistry and geoscience are exploiting variations in atomic weights to elucidate the origins of meteorites, to determine sources of pollutants to air and water, and to study the fate of injected carbon dioxide in geological media.

This fundamental change in the presentation of the atomic weights is based upon work between 1985 and 2010 supported by IUPAC, the and other contributing Commission members and institutions.
Provided by (news : web)