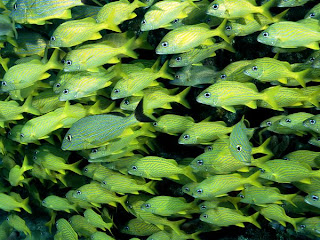 The take home is that if we site windmills in a pattern conforming to schools of fish, we can increase actual energy density by ten fold.  There are plenty of locales were this will be important.  It certainly makes a landowner happy as he is looking at a ten fold increase in rentals.

Thus the established wind farm infrastructure will be able to sustain a tenfold increase in production without adding new projects.

It is nice to see we even have field confirmation already.

Obviously, the best thing to do is optimize those well away from living quarters to avoid the noise pollution problem which is likely to become a bigger thorn as we progress.

Know the Flow: How Jellyfish Can Improve Wind Farms

What do you do every day? Quite a few different things. On a given day we could be working on wind energy or working with the navy on underwater vehicles. We have, in our laboratory, live jellyfish in the upstairs labs and, downstairs, robotic vehicles that we design. We study biological systems and try to steal ideas from nature to apply to technology.

Does the navy want a submarine that looks like a jellyfish? Our designs don’t look like robotic jellyfish per se. We take the existing platforms that the navy uses—the propeller-driven vehicles—and try to modify them to create the flows that we see in jellyfish.

Something like putting a spoiler on the back of a race car? That’s probably a good analogy—one of these things that modify an existing system to enhance its performance. Certainly we could imagine building things that were more like jellyfish or squid in their nature. But what we’re really waiting for is for the materials scientists to come up with something that provides the flexibility that you would want and at the same time has the strength and the resilience that you would expect from a vehicle that’s going to be in the water for many years at a time.

You recently showed that studies of fish schooling can aid wind-farm design. How does that work? The challenge with existing horizontal-axis wind turbines is that they need a lot of space; you have to separate the turbines so that their wakes don’t interact. So we started to explore vertical-axis wind turbines, which rotate on a vertical pole and can take wind from any direction. As I was starting to model the equations for the wind field around a turbine, it was sort of one of these eureka moments—I realized that they were very similar to the equations that we saw previously studying fish schooling. Fish arrange themselves to minimize the amount of energy that’s required for the group to go from point A to point B. Our aim would be to try to maximize the amount of energy that is extracted from these vertical-axis turbines.

So in your model, you are able to get 10 times higher energy density? Not just in our models. Over this past summer we have done small field tests, and the predictions of the model have been borne out.

Sounds like you’ve got your first business. [Laughs] I think what we’re really aiming to do is to change people’s minds about wind energy. People call it the most mature of the renewable energy technologies, where the future is: Can we build them larger? Can we put them offshore? But there are some fundamental advances that can be made if we reconsider whether the three-bladed turbine is the optimal solution.

If everyone could know one thing about your work, what would it be? Technology is ever evolving. While there’s a lot of opposition to the current platform for wind energy, there are better options to come. There’s no need to settle just yet.
Posted by arclein at 12:01 AM