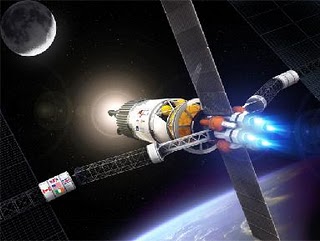 This engine is of course very important for working in space in the near future, particularly if Focus Fusion pulls off their fusion engine.  Then we have the power to operate these engines continuously for years. That means that the design objective of operating a large craft under one G of acceleration becomes plausible and the entire solar system is completely open to exploitation.

The purpose of one G craft is that it becomes possible to send crews on long missions to the edge of the solar system and back without endangering them.  Such craft could also easily carry a rotating torus for the crew to provide internal gravity when the craft is not under acceleration.

Once the energy problem is solved these problems are mere engineering problems.  The first big step is the creation of good working plasma engines to drive it all.

Ad Astra Rocket Company’s VASIMR® VX-200 rocket prototype demonstrated its highest power efficiency and performance so far in tests, which ended Friday November 19 at the company’s laboratory. Last week’s results met the efficiency milestone set by the company as it specifies the requirements for the VF-200 flight engine for the International Space Station.


At 200 kilowatts of power the plasma rocket delivers 5.7 of thrust at 72% efficiency and exhaust speed of 50 kilometers per second. 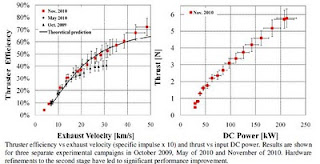 Many of the flight applications at the heart of our business model – orbital debris removal, satellite servicing, cargo flights to the Moon and Mars, and ejecting fast probes to the outer solar system – have required that the propulsion system achieve 60% system efficiency at 50 km/s exhaust velocity. The DC electrical power coming from a solar or nuclear power source has to be converted to radiofrequency (RF) power, which is then absorbed by the plasma. The fraction of the RF power that is converted to thrust is called the “thruster efficiency”. Now we have demonstrated in the lab the 70% thruster efficiency we need to achieve the 60% end-to-end system efficiency, at the required exhaust speed.


Short for Variable Specific Impulse Magnetoplasma Rocket, VASIMR® is a high-power plasma-based space propulsion technology being developed by Ad Astra that could provide far more efficient inspace transport than today’s chemical rockets. The company envisions an initial space test of the technology in late 2014, followed by commercial deployment shortly thereafter to greatly reduce the operational costs of maintaining an evolving space infrastructure, including space stations, satellites, lunar outposts and fuel depots in the Earth-Moon environment. Ultimately, VASIMR® engines could also greatly shorten robotic and human transit times for missions to Mars and beyond.