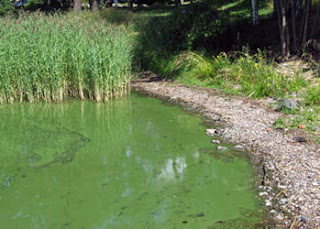 I suspect that there is more to this story than meets the eye.  However, in the meantime we have confirmation of hydrogen production.  The really good news is that this gives us a natural way to produce gaseous hydrogen at modest cost and that is surely good news.

The next question is whether this is a cost effective way to convert solar energy directly into hydrogen.  If that were to work out, the advantage is huge.  Close to utilization the advantages of hydrogen are high.  It only becomes a problem if we decide to ship it.

Even converting hydrogen into electricity is a pretty efficient process in the right circumstances.

This may all stall in the details, but at least we now have the option to play with.

Cyanobacterium gives off hydrogen as by-product of day-to-day processes.

A seemingly unremarkable ocean microbe turns out to be a multitasker -- it can not only photosynthesize, but can also produce large amounts of hydrogen, opening up a potential way to make the gas cheaply for fuel.

The single-celled cyanobacteriumCyanothece 51142 can make hydrogen in air, Himadri Pakrasi of in , and his colleagues report in Nature Communications1. Until now, the only organisms known to make hydrogen could only produce it in an oxygen-free environment -- making it a potentially expensive process to scale-up.

Cyanothece 51142 was discovered in 1993, off the coast of Texas, by Louis Sherman of Purdue University in West Lafayette, Indiana, a co-author on the study. Pakrasi later discovered that the bacterium has a two-stage daily cycle. During the day it undergoes photosynthesis, using sunlight and carbon dioxide to make oxygen and branching chains of glucose molecules called glycogen. When the Sun goes down, the microbe's nitrogenase enzyme kicks into action, using the energy stored in the glycogen to fix nitrogen from the air into ammonia. Hydrogen is formed as a by-product.

The two mechanisms are different in that photosynthesis is an aerobic process -- one that requires oxygen -- whereas nitrogen fixation, and, consequently, hydrogen production, can take place only anaerobically, because contact with oxygen destroys the nitrogenase enzyme. But Cyanothece 51142 manages to fix nitrogen even in the presence of atmospheric oxygen by burning cellular oxygen to produce energy. Because no photosynthesis is taking place, the bacterium uses up its cellular oxygen so that the nitrogenase enzyme is effectively in a largely oxygen-free environment.

Cyanothece 51142 has a natural circadian rhythm that allows it to be 'trained' to produce even more hydrogen.

After a single 12-hour-day and 12-hour-night cycle, Pakrasi and his team kept the lights on for a further 48 hours straight. During this time, the microbes continued with their 'night-time' nitrogen fixation and hydrogen production in the period that would normally have been dark, but made more fuel for the process by photosynthesizing. The researchers found that under these conditions the microbes adjusted their photosynthetic capacity to maximize nitrogen fixation.

The amount of hydrogen produced in this way -- 150 micro moles per milligram of chlorophyll per hour -- is the most ever recorded in natural cyanobacteria under normal atmosperic conditions, says Pakrasi. If the bacteria behaved in the same way in a litre of culture medium as they did in the 25 millilitres of medium used in the experiment, they would make just over 900 ml of hydrogen in 48 hours -- the time taken for the experiment.

"This is the most effective system published so far for hydrogen production," says Oliver Lenz at in , who works on the enzyme hydrogenase. In his work, Lenz has grafted hydrogenase directly onto photosystem I, a protein unit needed for photosynthesis. Naturally occurring bacteria can't compete with such systems, with hydrogen production rates in Lenz's system achieving greater volumes -- 3,000 micro mols of hydrogen per milligram of chlorophyll per hour, Lenz says -- but the system remains untested in a natural setting, and that's the advantage of Pakrasi's discovery. "I never expected such high rates for a natural organism," Lenz adds. Synthetic approaches such as Lenz's suffer from being short lived, Pakrasi says, often running out of steam within hours, whereas the cyanobacteria "just keep going for days".

Organisms other than cyanobacteria, such as the alga Chlamydomonas reinhardtii, also produce hydrogen at similar rates, says Olaf Kruse of in , who works with the species. But these other microbes need strict anaerobic conditions to work. Kruse is keen to see Pakrasi scale up his experiments to check thatCyanothece 51142 works as well when cultured in larger volumes. Pakrasi says that his team is about to begin this work, and has already moved from 25 ml of culture to 200 ml with similar results.

The work shows what an unmodified cyanobacterium is capable of, says Pakrasi. There are at least 10 other strains of Cyanothece, and Pakrasi expects these to work in a similar way. "One can -- and we have -- enhance the rate by making genetic modifications to the system," he says.
Posted by arclein at 12:01 AM