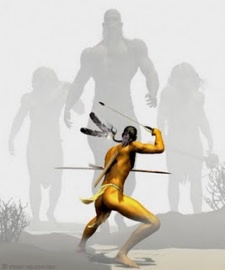 What was missing when I posted on Goliath in country was hard evidence.  Here we not only have the direct evidence, but also creditable context.

We learn that a tribe of super tall human beings, known as giants, lived in the at least up to recent times.  As I observed, the example happened to be of the key trade route for Lake superior copper on its way to Bronze Age Europe and the and the Philistines.

That we now know them to be red haired and white is important.  This suggests that their ancestral homeland was somewhere in the Baltic and that the copper trade brought them to the .

The collapse of the copper trade in 1159 BCE cut them off and left them as well as other Europeans vulnerable to local tribal warfare.  However, this remnant appears to have survived until quite recently.

I hope someone can get DNA from the remains and determine if anything is particularly unique.

Many Native American tribes from the Northeast and Southwest still relate the legends of the red-haired giants and how their ancestors fought terrible, protracted wars against the giants when they first encountered them in North America almost 15,000 years ago.

Others, like the Aztecs and Mayans recorded their encounters with a race of giants to the north when they ventured out on exploratory expeditions.


Who were these red-haired giants that history books have ignored? Their burial sites and remains have been discovered on almost every continent.

In the they have been unearthed in and New York state, , and , and .

And it's the state of that the story of the native Paiute's wars against the giant red-haired men transformed from a local myth to a scientific reality during 1924 when the were excavated.

At one time the was known as Horseshoe cave because of its U-shaped interior. The cavern—located about 20 miles south of modern day Lovelock, , is approximately 40-feet deep and 60-feet wide.

It's a very old cave that pre-dates humans on this continent. In prehistoric times it lay underneath a giant inland lake called Lahontan that covered much of western . Geologists have determined the cavern was formed by the lake's currents and wave action.


The Paiutes, a Native-American tribe indigenous to parts of , and , told early white settlers about their ancestors' battles with a ferocious race of white, red-haired giants. According to the Paiutes, the giants were already living in the area.

The Paiutes named the giants "Si-Te-Cah" that literally means “tule-eaters.” The tule is a fibrous water plant the giants wove into rafts to escape the Paiutes continuous attacks. They used the rafts to navigate across what remained of .

According to the Paiutes, the red-haired giants stood as tall as 12-feet and were a vicious, unapproachable people that killed and ate captured Paiutes as food.

The Paiutes told the early settlers that after many years of warfare, all the tribes in the area finally joined together to rid themselves of the giants.

One day as they chased down the few remaining red-haired enemy, the fleeing giants took refuge in a cave. The tribal warriors demanded their enemy come out and fight, but the giants steadfastly refused to leave their sanctuary.

Frustrated at not defeating their enemy with honor, the tribal chiefs had warriors fill the entrance to the cavern with brush and then set it on fire in a bid to force the giants out of the cave.

The few that did emerge were instantly slain with volleys of arrows. The giants that remained inside the cavern were asphyxiated.

Later, an earthquake rocked the region and the cave entrance collapsed leaving only enough room for bats to enter it and make it their home.

Thousands of years later the cave was rediscovered and found to be loaded with bat guano almost 6-feet deep. Decaying bat guano becomes saltpeter, the chief ingredient of gunpowder, and was very valuable.

Therefore, in 1911 a company was created specifically to mine the guano. As the mining operation progressed, skeletons and fossils were found.

The guano was mined for almost 13 years before archaeologists were notified about the findings. Unfortunately, by then many of the artifacts had been accidentally destroyed or simply discarded.

Nevertheless, what the scientific researchers did recover was staggering: over 10,000 artifacts were unearthed including the mummified remains of two red-haired giants—one, a female 6.5-feet tall, the other male, over 8-feet tall.

Many of the artifacts (but not the giants) can be viewed at the small natural history museum located in .

Confirmation of the myth

As the excavation of the cave progressed, the archaeologists came to the inescapable conclusion that the Paiutes myth was no myth; it was true.

What led them to this realization was the discovery of many broken arrows that had been shot into the cave and a dark layer of burned material under sections of the overlaying guano.

Among the thousands of artifacts recovered from this site of an unknown people is what some scientists are convinced is a calendar: a donut-shaped stone with exactly 365 notches carved along its outside rim and 52 corresponding notches along the inside.

But that was not to be the final chapter of red-haired giants in .

In February and June of 1931, two very large skeletons were found in the Humboldt dry lake bed near Lovelock, .

One of the skeletons measured 8.5-feet tall and was later described as having been wrapped in a gum-covered fabric similar to Egyptian mummies. The other was nearly 10-feet long. [Nevada Review-Miner newspaper, June 19, 1931.]