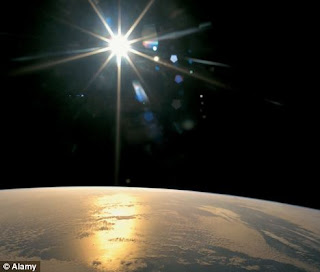 The idea of an additional large planet orbiting far outside our solar system has been around for a long time.  It may well exist.  It may even be a brown dwarf that we simply can not see.

However, I think that a circular orbit is unlikely.  Sitchen predicted his plane X to have a long elliptical orbit that brought the planet into the inner solar system.

We have even better evidence that we orbit through the Sirius cluster every 200,000 years or so.  Such an event could well look like planet orbiting us.

It would likely produce a distorted orbit for a distant solar planet.

Meanwhile, we have learned that disturbing a comet is not an easy trick without a big object and that the presence of comets is confirmation of perturbation.  Something(s) is out there.  Yet perturbed orbits could still be artifacts of the pass through Sirius over a 100 thousand years ago.

There may be room for everything, but if we give credence to any of the material, I find the pass through Sirius satisfying because it gives us a large hot object that could meet the requirements of purported eye witness reports that Sitchen reported.

There is presently no obvious evidence of any recent comet disturbances which suggests that any hypothetical planet is a long ways away for now.

http://www.dailymail.co.uk/sciencetech/article-1336540/Massive-dark-object-lurking-edge-solar-hurling-comets-Earth.html
A massive dark object may be lurking on the edge of our solar system, according to scientists.

Most comets that fly into the inner solar system seem to come from the outer region of the Oort cloud -  a region of icy dust and debris left over from the birth of the solar system.

The cloud starts from a point about 93 billion miles from the Sun and stretches for around three light years and contains billions of comets, most of them small and hidden. 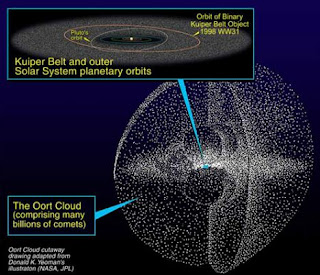 A Nasa graphic which illustrates how the Oort Cloud surrounds our solar system. Scientists believe that an object with a huge mass may be pushing comets towards Earth from the cloud

Now new calculations suggest a large object that is up to four times as big as Jupiter could be responsible for sending them in our direction.

The scientists have analysed the comets in the Oort cloud and deduced that 25 per-cent of them would need a nudge by a body of at least Jupiter size before they changed orbit.

Astrophysicists John Matese and Daniel Whitmire at the came up with theory said that 'something smaller than a Jovian mass would not be strong enough to perform the task'.

They believe that our solar system has a hidden 'companion' that has so far remained undetected.

The scientists have been studying the cloud using WISE, Nasa's infra-red space telescope that is capable of detecting dark objects.

Matese said: 'I think this whole issue will be resolved in the next five to 10 years, because there’s surveys coming on line that will dwarf the comet sample we have today.

'Whether these types of asymmetries in the directions that comets are coming from actually do exist or not will definitely be hammered out by those surveys,' Matese added. 'We anticipate that WISE is going to falsify or verify our conjecture.'

About 3,200 long-period comets are known, one of the most famous being Hale-Bopp which was visible to even the naked eye during 1996 and 1997.

Halley's Comet, which reappears about every 75 years, is a 'short-period' comet from a different part of the Solar System called the Kuiper Belt.

If it exists the new planet is so freezing cold it is difficult to spot, researchers said.

It could be found up to 30,000 astronomical units from the sun. One AU is the distance between the Earth and the sun, about 93 million miles.

Scientists have already proposed that a hidden star, which they call 'Nemesis,' might exist a light-year or so away from our sun.

They suggest that during its orbit it would regularly enter the Oort cloud, jostling the orbits of many comets there and causing some to fall toward Earth.

These occasional comet showers could be why the mass extinctions on Earth are so regular, some scientists believe.

The research appeared in the online edition of the journal Icarus.

'Most planetary scientists would not be surprised if the largest undiscovered companion was Neptune-sized or smaller, but a Jupiter-mass object would be a surprise,' Matese told SPACE.com

'If the conjecture is indeed true, the important implications would relate to how it got there — touching on the early solar environment — and how it might have affected the subsequent distributions of comets and, to a lesser extent, the known planets.'

http://www.dailymail.co.uk/sciencetech/article-1336540/Massive-dark-object-lurking-edge-solar-hurling-comets-Earth.html#ixzz17dmWz6PJ
Posted by arclein at 12:01 AM

Email ThisBlogThis!Share to TwitterShare to FacebookShare to Pinterest
Labels: sitchen