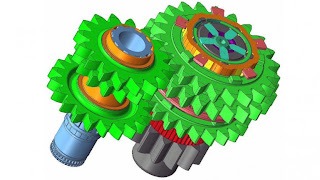 A comment was made that this had a previous incarnation and that makes sense. It just never got into the mainstream, possibly because the need was not compelling.

Whatever its history, here it is and it nicely simplifies the drive train while eliminating much of the weaknesses of the dual clutch assembly.  This is another incremental improvement in traditional transport technology which we will hopefully soon see of in favor of electrical configurations.

In a way it is remarkable that we should be squeezing improvements out of the drive train after a full century of intense development that has never let up.  Perhaps someday we will have perfection.

Xtrac IGS is applicable to a two speed EV transmission

After two years secret development in motorsport competition, Xtrac unveiled an important new driveline technology this week in the form of an Instantaneous Gearchange System (IGS). It does exactly the same thing a dual clutch transmission achieves with less weight, cost, and complexity. The secret to Xtrac IGS is the integration of a ratchet and pawl mechanism between each gear hub and the main shaft so that two consecutive gear ratios can be selected and engaged simultaneously, but with only one set of gears driving.

Porsche was the first to develop an answer to this problem with its Doppelkupplungsgetriebe (dual clutch transmission - DCT) and the DCT is now in common usage in cars and has just been applied to motorcycles for the first time by Honda.

Size, weight and complexity are the main drawbacks of the DCT. Now motorsport transmission specialist Xtrac has applied its high performance engineering skills to design and develop a seamless gearchange known as IGS or Instantaneous Gearchange System. IGS is small, lightweight, and is now ready for commercial development in motorcycles, electric vehicles, cars, trucks and buses. IGS was unveiled this week in at the International CTI Symposium “Innovative Automotive Transmissions Hybrid & Electric Drives”.

The secret to Xtrac IGS is the integration of a ratchet and pawl mechanism between each gear hub and the main shaft so that two consecutive gear ratios can be selected and engaged simultaneously, but with only one set of gears driving.

“When introducing new technology to the automotive mainstream it’s important to have progressed beyond the initial research and development phase,” said Xtrac Technical Director Adrian Moore.

“Car makers like to see practical demonstrations to show that the technology actually works and is more than a concept. With our motorsport experience we have the advantage of two years of racing IGS with professional teams.”

IGS is protected by worldwide patents, and the company reports that initial development will focus on improving the efficiency of electric vehicle powertrains. Xtrac has considerable experience in the design and manufacture of transmission systems for experimental, prototype, pre-production and specialist low volume vehicles, and a study is already underway to implement IGS into a two-speed EV transmission with the aim of ensuring the optimum performance of the vehicle.

Xtrac is based in Berkshire, UK, with satellite motorsport operations in located at and in the . Its gearboxes, differentials and driveline components are used in Formula One, IndyCar, Touring Car, Rallying, Rally Raid, GRAND-AM and sportscar racing.
Posted by arclein at 12:01 AM