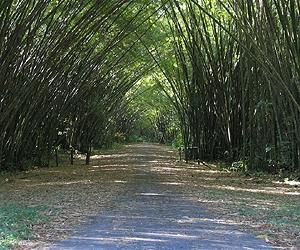 Without question bamboo culture needs to be widely exploited and propagated, not so much as a plantation crop, but as a wasteland crop.  It is capable of holding soil and suppressing other growth that is not wanted.  Any river valley would benefit from the emergence of bamboo forests building up the banks.

It grows well in temperate climates such as the .  I have personally grown a patch of timber bamboo.  My biggest problem for a small planting was to defend against hungry squirrels who love the young shoots.

Obviously rodent damage would need to be controlled.

Planting an otherwise unusable waste land would provide an annual crop of young bamboo canes and a large supply of bamboo leaves and thin branches which may serve as fodder for cattle and deer in particular.

Of course a market would have to be developed for the large canes, but smaller cane varieties could simply be fed to deer and cattle.

There are plenty of places where the plant would prosper and should be encouraged.

As a side note, protect bamboo shoots with a small cone of chicken wire to avoid rodent damage in the spring and leave it on to prevent later damage.


World leaders pondering the conundrum of climate change should think of bamboo, a group promoting the versatile grass said at the UN talks in on Wednesday.

"Bamboo is a remarkable resource for driving economic development, and is readily available in many of the world's poorest countries across Africa, Asia and Latin America," said Coosje Hoogendoorn, INBAR's director general.

"It helps support the livelihoods of more than 1.5 billion people, generates more than five billion dollars in annual trade and can grow up to one meter (3.25 feet) a day."

"Bamboo housing has been around for centuries, but many people don't understand its full potential and still see it as the poor man's timber," said Alvaro Cabrera, INBAR's regional coordinator for Latin America and the Caribbean.

"In fact, bamboo is stronger for its weight than steel, it's cheaper than timber, uses far less energy in processing than concrete and can dance in earthquakes... Bamboo should be referred to as the wise man's timber."

INBAR, a 13-year-old organisation based in , is an inter-government organisation, gathering 36 countries under a treaty, that also fosters fair-trade and development schemes involving bamboo and rattan.

It made its pitch on the sidelines of the November 29-December 10 UN talks in , where countries are wrestling for solutions to climate change.

In addition to providing livelihoods for people, bamboo forests would be an invaluable weapon against carbon dioxide (CO2), the principal greenhouse gas, through photosynthesis, INBAR said.

Some species of bamboo can suck up CO2 at least as fast as Chinese fir and eucalyptus, among the swiftest-growing commercial species of trees, according to a scientific report presented last month.

In addition, bamboo roots reduce soil erosion, preventing hillsides and riverbanks from washing away in floods and landslides.

Hoogendoorn told AFP that the group was working on a certification scheme whereby bamboo would be sold with a label proving that it came from a sustainable plantation and allowed other species to thrive.

Even so, certification "is complex and very difficult," she admitted.

One of the biggest destroyers of biodiversity is monoculture crops grown on huge spaces on soil treated with pesticides and fertilizers.

Natural bamboo forests, as opposed to plantations, are a haven for many species of wildlife, including the giant panda.

World trade in bamboo and rattan is more than five billion dollars a year, with , and Vietnam the three biggest sources, INBAR said.
Posted by arclein at 12:01 AM

Bamboo sounds really good. Good for a lot of things. It grows really well. Perfect for poor countries and many areas. And the best part is that it does not open your consciousness when you smoke the leaves. If it did that, then no matter how good it is, even if you can eat it and wear it and power machines with it and build stuff with it create industries and cure cancer with it, the World Government would not permit it's use. Just like the story of Marijuana. Your third eye remaining CLOSED to universal potential is job one for government control.