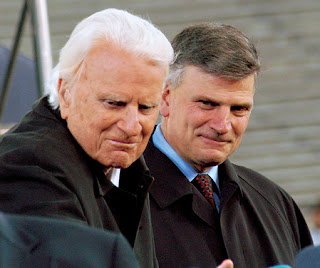 Of course Sarah is not running for the presidency, but can certainly endorse her Christianity as he very much does right here.

Watch the video and you are shown a fresh perspective on Sarah Palin, who is on the way to been the most examined life in the political arena.  The surprise is that she is up to it.

She went to and refused the press.  The press ended up with and gave us this.  You could not have scripted it much better.

Sarah Palin’s visit to the earthquake-ravaged showed she is not “afraid to get her hands dirty,” says the Rev. Franklin Graham. The former governor is a “woman of strong principle and no question she has a strong faith in God,” the son of renowned evangelist Billy Graham said during a Newsmax.TV interview in which he discussed his hosting her Haitian visit.

“I showed her what Samaritan’s Purse has done” to alleviate the suffering from the killer earthquake and a hurricane this year, said Graham, president of the international relief organization. “We have built over 10,000 shelters for people to live in. We have set up entire communities across the area, but more importantly there is a cholera epidemic now and this cholera epidemic was understated . . . This could be a huge, huge problem. We have already 2,000 people dead.”


The January earthquake killed more than 200,000 people and left more than 1 million homeless. The poverty-stricken country was hit with a cholera epidemic in October and then widespread flooding after Hurricane Tomas in early November.

Samaritan’s Purse has set up two clinics, including one with 200 beds, to treat a disease so deadly in can kill in hours, Graham told Newsmax.TV in the exclusive interview.

Graham, who said he has worked with Palin on a number of projects in Alaska, invited her to to view the relief efforts. Accompanying her on the tour last weekend were her husband, Todd, and daughter .

The former GOP vice-presidential candidate “has tremendous compassion for people, she loves people, and she cares deeply about people,” Graham said.
“She was an encouragement not only to the staff and to the relief workers (but) even to the Haitian people who didn’t know her,” Graham said.

“She came in with her smile. She would sit on the cots. Now, you have to understand a cholera clinic, these cots have been soaked in urine, and fecal matter, and vomit. Cholera is a horrible thing, and she just sat right there in the middle of it, holding peoples’ hands, talking to people, holding babies, it was an amazing thing. She’s quite a lady and not afraid to get her hands dirty.”

The topic of whether Palin will run for president did not come up, Graham said. News reports about her visit have quoted her as saying it wasn’t time to be political. Instead, she said as she ended her two-day visit, “I do urge Americans not to forget ."

As for Graham’s appraisal of Palin, he said: “When you read her book ‘Going Rogue,’ she gives a testimony on how she gave her life to God. And the last page of her book ‘Going Rogue,’ she mentions or says to the reader if you haven’t done what I’ve done, I encourage you to do it. And she invites a person to invite God into their heart, their life. I’ve seen the governor on a number of occasions and no question her faith is a big part of her life — that’s who she is. She’s a believer in Jesus Christ, a follower of the Lord Jesus Christ, that’s just her makeup. It’s her DNA.”

Hey Michael Shoen, isn't it amazing how, when you hate someone, you can't see straight.