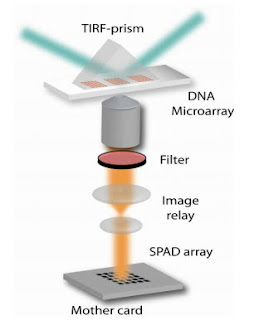 A long sought capability has now been mastered.  We can now image atoms and also image the interior of a cell.  So many hard science questions have been waiting for this ability.  A lot of work will be in the form of simple confirmation of accepted unconfirmed models.  This is great news for science.

Medical science was moving quickly and will now hugely accelerate with this ability.  It will no longer be necessary to be terribly subtle when you may look at what is actually happening.

The point is that we can now image a hydrogen atom.  We will now see how other atoms are constructed and be able to look for design variations.  This is all huge and as stated it has been long anticipated.

1. Kurzwelai reports that a European consortium has developed the Megaframe Imager, an ultrafast camera capable of recording images at one million frames per second. It allows for cellular and sub-cellular imaging, neural imaging, biosensing, DNA and protein microarray scanning, automotive collision studies, and high-sensitivity astronomical observations.


Fluorescence lifetime biosensing with DNA microarrays and a CMOS-SPAD imager

Fluorescence lifetime of dye molecules is a sensitive reporter on local microenvironment which is generally independent of fluorophores concentration and can be used as a means of discrimination between molecules with spectrally overlapping emission. It is therefore a potentially powerful multiplexed detection modality in biosensing but requires extremely low light level operation typical of biological analyte concentrations, long data acquisition periods and on-chip processing capability to realize these advantages. We report here fluorescence lifetime data obtained using a CMOS-SPAD imager in conjunction with DNA microarrays and TIRF excitation geometry. This enables acquisition of single photon arrival time histograms for a 320 pixel FLIM map within less than 26 seconds exposure time. From this, we resolve distinct lifetime signatures corresponding to dye-labelled HCV and quantum-dot-labelled HCMV nucleic acid targets at concentrations as low as 10 nM.


See it for yourself: a new breakthrough in imaging technology using a combination of light and sound will allow health care providers to see microscopic details inside the body

Access to this level of detail potentially eliminates the need for some invasive biopsies, but it also has the potential to help health care providers make diagnoses earlier than ever before—even before symptoms arise.


3.A research team led by Yuichi Ikuhara, a professor of material science at the have succeeded in taking an image of a single hydrogen atom, the smallest and lightest of the chemical elements. 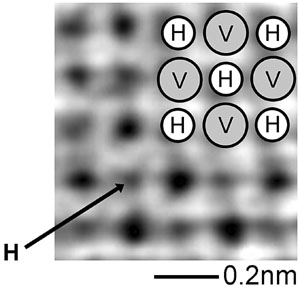 Although it had been thought acquiring direct images of a hydrogen atom, whose diameter is about one-ten-millionth of a millimeter, was impossible, the team managed the feat with a state-of-the-art "scanning transmission electron microscope" while examining vanadium hydride, a hydrogen storage material.


The microscope scanned an electron beam onto a tiny spot, placed at a theoretically calculated location, on the specimen to enable a detector to catch and film the image of the hydrogen atom as well as the vanadium atom.