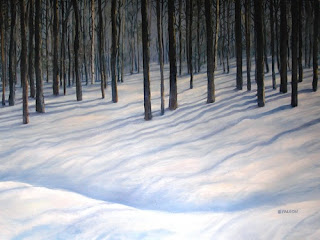 In case you have missed it, the entire Northern Hemisphere is getting whacked with severe early winter conditions.  It is obviously wrecking agriculture anywhere it has exposure such as which is always rolling the dice on the weather at this time.  Maybe it is time we moved the orange business to .

Winter has set early and deep.  That means more serious blizzards and a large snow pack and a run off.  The downward trend on the Global picture established three years ago is strengthening and we can presume that the Arctic Ice Pack is plausibly thickening unless the heat engine is able to stave it of.

The Global Warming evangelists are looking sillier than ever and are on the road to give King Canute a run for his money.

These reports tell the story and recall that this is all pre solstice.  By rights the worse has yet to be seen.  I remember how tired of winter I became by March, back in .

Stopping by the woods on a snowy evening.
by Robert Frost.

Whose woods these are I think I know
His house is in the village, though;
He will not see me stopping here
To watch his woods fill up with snow.

My little horse must think it queer
To stop without a farmhouse near
Between the woods and frozen lake
The darkest evening of the year.

He gives his harness bells a shake
To ask if there's some mistake.
The only other sound's the sweep
Of easy wind and downy flake.

IN FOR WORST BLIZZARD IN 100 YEARS

ABOVE: WHITEOUT: Snow hits and, top,

will be buried by the worst ­blizzards in 100 years ­today

By Steve Hughes
FREEZING will be buried by the worst ­blizzards in 100 years ­today.

Drifts of up to 6ft are expected as 60mph Arctic gales batter the country.

Motorists and train commuters have been warned to expect chaos while thousands of schools will shut early.

Millions of Christmas cards and presents will not arrive.

Forecasters have warned that the storms, which will drop a foot of snow in hours, will be even more serious than the notorious 1962-63 winter and the worst to hit since 1927.

Giant drifts are set to close dozens of main roads. Scores of railway lines will be threatened with long delays and ­cancellations.

Netweather forecaster Ian Michaelwhite said: “Heavy snow is expected to fall on Thursday everywhere north of a diagonal line from the River Humber to the Cotswolds and .

“The winds are expected to cause 6ft drifts in the north. Many roads will be closed, including A roads.”

Long-range forecaster Jonathan Powell, of Positive Weather Solutions, said the freeze could last until mid-February and the temperature this winter could plummet to a record low.

The Polar freeze is set to cost our economy £13.2billion by Christmas, wiping out 1% of the ’s annual turnover, said loss experts RSA.

Retailers said the snowfalls could force some small firms to fold.

To add to the misery, petrol prices rose even higher, with an average litre of unleaded hitting a 122.14p.

, Dec. 15 (UPI) -- A cold snap dropped temperatures in to a 10-year low Wednesday morning with a reading of just 12 degrees above zero, the city's weather bureau said.
The freezing weather made traffic congestion in the Chinese capital worse than usual after hikers and bicycle riders switched to cars, taxis and buses to get to work, 's official Xinhua news agency reported.
"It was so cold my face went numb," one female commuter told a reporter.
She said she usually walked to work but ended up waiting 20 minutes in the cold for a bus.
Some private car owners risked fines under 's three-year-old traffic management rules and drove to work instead of taking public transportation.
One mother said she was willing to risk a fine to drive her son to school because if he caught a cold the doctor bill would be much higher.
Many other parts of were also suffering from record cold temperatures Wednesday.
Forecasters said the weather would start to improve Thursday.

, , Dec 16 (acn) registered on Wednesday its lowest temperatures for December in the last 50 years with 31 local records.

In , in , the temperature registered was 12.1 degrees Celsius, the lowest in the current winter season.

The national record is 0.6 degrees Celsius, registered in Bainoa, Habana province, in 1996.

More records fall as snow keeps piling up in Syracuse

By Charles McChesney / The Post-Standard

http://www.syracuse.com/news/index.ssf/2010/12/another_record_falls_as_snow_k.html
Winter in Central NY 2010 - A Wash of WhiteThe Post-Standard's photography staff headed out into the weather last week, cameras in hand, as nearly 4 feet of snow blanketed Central New York. Photographers captured nature and its inhabitants at the peak of the snowfall and its snowy aftermath .Watch video

Syracuse, NY -- Central New York set another snowfall record Wednesday: 11.9 inches fell by midnight, smashing the record of 5.4 inches for the date that has stood since 1951.
Another 3.4 inches have fallen since midnight, bringing to within an inch of its record snowfall for the entire month of December.

The new snow pushed this December – which reached its midpoint at noon – to second on the list of snowiest Decembers on record. National Weather Service instruments report 69.5 inches of snow have fallen at since the month began through 6:54 this morning. Syracuse's snowiest December was in 2000, when 70.3 inches fell.

The 70.3 inches of snow that has fallen since July 1 is the most ever before the winter solstice, the official start of winter, said Theodore Champney, a meteorologist with the weather service's office. The old record, 63.5 inches, was set in 1995.

If you’ve become numb to all the records being buried by December’s weather, here’s an item you might find cheering: There is no snow in the forecast for the weekend or Monday during the day.

Really. National Weather Service forecasters expect a mix of sun and clouds on the weekend and cloudy skies Monday during the day.

Before then, however, there’s snow in the forecast, starting with 2 to 4 inches more today and snow showers on Friday. Some places may get much more. The weather service warned shortly before 6 a.m. of a heavy lake effect band that could drop 2 inches an hour between Clay and .

Parts of also were being bombarded. Fulton, for example, has received a foot of new snow since midnight, Champney said.

Mike Greenlar / The Post-StandardHow much is 66.1 inches of snow? If sources on the Web are accurate, pop sensation Justin Bieber, shown during his performance at this year's State Fair, is 5 feet, 5 inches tall. If he stood in 66.1 inches of snow, the top of his famous hair would be covered by more than an inch of snow.

The snow continues to come from cold winds crossing the warm waters of . The moisture, carried in bands that shift across much of the region, have been responsible for nearly all the snow that has forced Central New Yorkers to shovel, plow, scrape and brush just to get around.

Wednesday’s snow proved particularly daunting to some trying to get around. Many accidents were reported with cars spinning off roads. Tractor trailers were reported involved in accidents on the Thruway and Interstate 81. Police reported no serious personal injuries. roads seemed particularly challenging to drivers as snow accumulated too quickly for plow crews to keep up.

Forecasters expect the lake effect machine will taper off today. The lake effect storm warning that covers much of the county is set to expire at 1 p.m.

That doesn’t mean the snow’s all done. Tonight’s forecast calls for 1 or 2 inches more. And, looking to next week, there are snow showers in the forecast for Monday nigh