Why the GOP Fears Sarah Palin 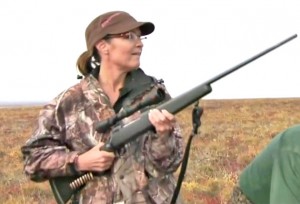 Sarah Palin is old enough and experienced enough to have a mature voice as a writer and thinker on present day affairs of state.  Of course, any published item will be polished to death, unlike my scribblings in this somewhat personal intellectual daybook.  And these items do reflect her opinions and direction and it is pretty well as good as we could reasonably expect.

The GOP problem is that a lot of folks think that they own the rarified heights of the party’s influence.  Sarah Palin is a party crasher who has strategically allied herself with the tea party and has enabled and assisted the tea party in setting the GOP agenda.  However loyal to the GOP you may be, your own fantasies of influence are naturally diminished in the wake of a tyro who is not too famous for listening to the good old boys.

The GOP is been reinvented in the form of Sarah Palin’s populous tea party.  We will soon learn if this is a winning strategy, but the only comparable that I can think of is Teddy Roosevelt who was the male version of Sarah.  I seriously do not think that anyone can stop her from grabbing the GOP nomination.

As I posted two years ago, the media has thrown every possible stone at her to the point that they are completely out of ammunition.  This has served to harden her support and make everyone else form an opinion on her prematurely.  She is now through reality shows, shooting game, and opinion pieces confounding those opinions made in haste.

She has reached that point in the media universe were she has become coated with Teflon.  It all slides off now.

The GOP has a great populist leader who is seen to be truly one of the people and seen to be an American action figure.  Obama is in deep trouble because his record is a litany of failure to take any action when it was called for.  Palin will be able to beat him with this record.

Why the GOP Fears Sarah Palin

One way or the other, Sarah Palin will have the biggest impact on the GOP’s chances to win the presidency  in 2012. Her recent editorial in the Wall Street Journal supporting Rep. Paul Ryan’s economic deficit reduction and economic growth plan is simply her latest in a series of comments on the important issues for . Her astuteness in these matters is apparent. No, I don’t care if she actually writes these, although there is no reason to believe she does not. Whether she does or not, it is apparent she understands their importance and meaning.
The two areas where the Federal Government can do the most damage domestically are: 1) the fiscal issues of tax and spending policy, i.e., too much of both; and, 2) regulatory nihilism—-in particular relating to the ad hoc restriction of property rights unilaterally by the executive branch. This happens when the Government implements and interprets vaguely written laws with “unintended” consequences. Examples include the recentChrysler and GM bailouts, unfunded mandates of all kinds; defining CO2 as a pollutant; the already unchecked power of the EPA overall; and the upcoming Big Kahuna, “Obamacare”.

Ryan’s proposal, A Roadmap for America’s Future, addresses the first issue most directly and parts of the second issue indirectly (for example, his proposals to change Obamacare). I think his plan is a good plan. It is good primarily because it exists at all. If it were up to me the plan would be more simple. About 2/3rds of the forward federal budget are entitlements. Basically, the way our entitlement system works is as follows. It taxes 1 dollar from one group of people and promises 2 dollars to another group of people. All of us are in both groups, although at different times in our lives and for different forms of entitlements.

This is not hyperbole, just a simple statement of what the Government does in fact. The ratio of 1 to 2 may be different, but you get the point. What does this mean? It means as a nation we are less wealthy than our officialbalance sheet says we are. Think of your own assets and liabilities. If you are like me there is one liability you ignore, the debt of the federal (and state) government, which can only be paid with your taxes, (which is what politics is about, i.e., “who gets and who pays?”). On average, a family of four owes about $140,000 using the most favorable accounting in federal debt. It is really a multiple of that when one factors in the growth path of entitlements, as they are growing far faster than our economy can support.

Any individual today can go on the Social Security website and it will actually show you your personal social security account as if it were a brokerage statement. But unlike a brokerage statement, there are no assets—just a promise to pay. What they will not show you are your personal liabilities owed to the government, because we pretend individuals don’t owe it. If it were there honestly, you would find you owe more money than you will receive, if we had actual transparency. Our entitlement system is not a mere transfer payment system, which by comparison would be almost harmless; it is a true Ponzi scheme, and therefore not sustainable. All economists know this of course. I honestly believe most politicians really do not understand this.

Ryan’s proposal at least transparently addresses the problem of entitlements for all to see. Yet it sits out there in no man’s land within the GOP, with no visible alternative in sight. Entitlements are called the third rail in politics for a reason. I believe the reason the GOP fears this issue, as all past politicians have, is there is genuine concern that the so called tea party movement, which put the GOP back in power, is not really the vanguard of a fiscal restoration movement. Rather, they fear it is a more traditional “don’t gourd my Ox” movement. Maybe it is; if so then we really are at the beginning of the end for the American Empire.

Next: What does it mean that Palin is the first 2012 hopeful to endorse a specific plan?

Sarah Palin is the first presidential “hopeful” to come out aggressively in support of Ryan, while recognizing it is not a “perfect plan”. Implicitly and explicitly, therefore, she is the first candidate to support an actual existingplan to reduce entitlements in exchange for a more free market based savings and healthcare system. This is different than supporting a non-existent or incoherent plan spouting platitudes. This is significant in my opinion. The GOP candidate that can carry this message forward without alienating the people, who must elect them, will have achieved a historically significant accomplishment. It is very hard to be the bearer of bad news such as; “we are not taking anything away from you because you already don’t have it. Rather, we are creating a system where your savings and health care consumption are not empty promises”. I do not pretend this is politically easy. But, as a nation, we need to do this.

Of course, as has been obvious for 2 years, the GOP has no respect for Palin. It even borders on hate or disdain. They disdain her because they believe she won a lotto ticket when McCain put her in the spotlight, (which she did). They hate her because she is popular and uncontrollable, also true. They disdain her because they believe she is vain and self absorbed —I disagree—but certainly no more so than other candidates. They hate her because they think she is stupid. This implies those who say so are smart. To quote Steely Dan from “Reelin’ in the Years”—“you’ve been telling me you were a genius since you were seventeen, and all this time I’ve known you, I still don’t know what you mean”. This obsession with “smart” and politics is the ultimate misunderstood red herring. Finally, and most of all, they hate her because they think she will lose—which only an election can determine.

Consequently, and most recently, we see the spectacle of my home state (and town) governor, Chris Christie, yukkin’ it up with Jimmy Fallon on the dopiness which is Palin. I like Christie a lot, but now less so. We see the shocking gracelessness of Big Barb Bush wishing Palin would just go back to . We see Karl Rove invoking the empty concept of missing gravitas as Palin does an Culture and Travelogue show on TLC. Gravitas in politics? Is he kidding? Which politician had an 11th commandment? I forget.

As Palin said after the disgraceful comments of Christie and Ms. Bush, “let’s have the competitive process determine who will be both candidate and president”. I believe the person who will be chosen for both is the one who can, among other issues, best articulate our fiscal problems and actual solutions, in a way which persuadespeople truthfully. Such a person also has the potential to be an historic figure. I don’t know if this person is Palin or not, nor does she. But her support of Ryan’s plan, despite its weaknesses, is a step in the right direction.

So far, Jumpin’ Joe Biden said it best, even if partially in jest; “It is a mistake to underestimate Sarah Palin”.