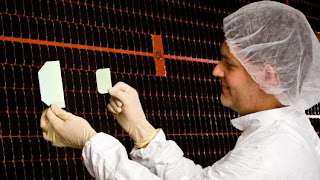 This will certainly dominate the high end part of the market pretty quickly and certainly shows what is possible.  I wish they would define what part of the spectrum is utilized and the energy gain achieved so that one can anticipate other applications better.

The industry continues to be dynamic and we are seeing massive build outs of utility sized operations.

What is still needed is another decade of earth bound operating history that results in financial comparables that are trustworthy.  As in the wind business which has earned out the time already, you can not buy time.

As far back as 2006 Spectrolab was achieving conversion efficiencies of over 40 percent in the lab with its high-efficiency multi-junction concentrator solar cells and it reached a peak of 41.6 percent with a test cell last year, setting a new world record. The company’s newest terrestrial concentrator photovoltaic (CPV) cell, called the C3MJ+, uses essentially the same technology as its record breaking test cell and follows on from its C3MJ solar cell in production since mid-2009 which boasts a conversion efficiency of 38.5 percent. The C3MJ+ solar cells

"Given the new cells' close similarity to our existing production cells, we believe that our current C3MJ customers will be able to easily upgrade for more efficiency," said Russ Jones, Spectrolab director of CPV Business Development.

Spectrolab claims the title of the world’s leading supplier of solar cells for satellites with its cells supplying power to around 60 percent of satellites currently in orbit, as well as the International Space Station. Boeing hopes to transfer that success to the terrestrial solar cell market with the new high-efficiency solar cells that are expected to be available from January. And it won’t be resting on its laurels. It expects Spectrolab will achieve a 40 percent average production efficiency for terrestrial solar cells in 2011.
Posted by arclein at 12:01 AM