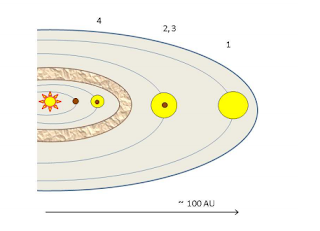 The only catch is that the recent work on planets around other nearby stars is showing us something that is not nearly so neat.  I find it much easier to blame Jupiter for all of it.

Jupiter acts as the sun’s binary and it happens to be spinning close to gravitational instability.  That allows it to be a planet pump quite able to produce the inner planets while leaving debris in the asteroid belt.

In an earlier posting, I pointed out that Venus is best explained as a recent emergent that is has only begun to cool and that the red spot is the scar so caused.  All others such events took place early in the solar system’s formation.  This last event was likely triggered by a large planetoid impacting into Jupiter sending it over the limit of stability.

The rest of the solar system is a handful of gas giants that may be explained by this model.  However, I expect to find it much more messy than all that.

When it comes to planet formation, the conventional thinking has been with us for over 40 years. It goes like this: bits of rock and dust clump together to form rocky planets which then attract the gases that form their atmospheres. The gas giants form when these rocky cores grow to at least ten times the size of Earth and so can attract huge gaseous envelopes.
There are numerous problems with this model, not least of which is explaining how metre-sized lumps of rock end up sticking together after smashing into each other at random. Then there is the problem of planetary rotation. If the planets form from the random aggregation of rock and dust, why do almost all of them rotate in the same direction? Surely, their rotations should be randomly distributed.
But in the last few months various astrophysicists have begun discussing another idea that solves these problems. Today, Sergei Nayakshin at the of in the gives a neat account of this new thinking.
The new approach turns the conventional model on its head. Planet formation begins at distances in excess of 50 AU from the mother star, when random variations in the density of the protoplanetary gas cloud begin to attract more gas and so grow under the force of gravity.
Inside these loose clumps, called giant planet embryos, any rocky material aggregates at the centre forming a rocky core. These cores all rotate in the same direction as the original gas cloud because they from by the gravitational collapse of the cloud rather than by random collisions.
As the cores are forming, the embryonic planets interact with the mother star's gas cloud causing them to spiral inwards. Astronomers have long known that huge gaseous atmospheres are unstable at distances closer than a critical radius because of various factors, such as tidal forces and irradiation from the Sun. So when the embryonic planets get closer than this critical radius, they loose their gas envelopes leaving behind terrestrial rocky planets like ours.
Incidentally, at the critical radius, the inspiralling planets discard not only gas but any solids still mixed up in their outer atmospheres. This radius corresponds to the asteroid belt in our system. This new thinking explains for the first time how the belt formed and why it separates the gas giants from the terrestrial planets.
The gas giants like Jupiter are planetary embryos that simply hadn't made it this far towards the Sun when the orbital dynamics settled into the relatively stable system we have now.
One impressive feature of this model is that it naturally accounts for the structure of the Solar System, with the distant gas giants separated from the inner rocky planets by an asteroid belt. No other model does this so elegantly. It is this elegance that has focused so much attention on it so quickly.
What's curious about this new thinking is that none of the mechanisms it relies on are new ideas. But in the past, each has been suggested and then discarded.
For example, the idea that terrestrial planets are gas giants that have lost their gas envelopes was first put forward over 30 years ago. Astronomers abandoned it after various calculations showed that gas giants couldn't form close to a star where we find rocky planets today.
And the idea that planets can migrate great distances in a planetary system has also been around for years.
What's new is the re-ordering of these processes so that the gas giants form first and then migrate, losing their atmospheres as they get closer to the mother star. All of a sudden, it looks obvious.
There's still work to be done, of course. Nayakshin points out that the new model doesn't yet account for structures such as the Kuiper Belt, the Oort Cloud not can it explain the composition of comets.
But there's a sense of excitement about this idea that is giving it considerable momentum in the community. You can be sure that astronomers will be poring over the details as I write. Expect to hear more about it in the coming months.
http://arxiv.org/PS_cache/arxiv/pdf/1012/1012.1780v1.pdf
Posted by arclein at 12:01 AM