A prayer for Little Adam 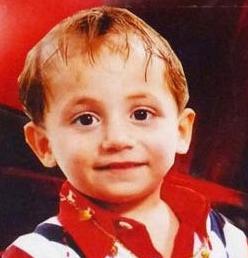 Why does it take a three year old child to show everyone the proper response to Islamic and ethnic hatreds?  In the end after two hours, their blood lust still unsated, one of them simply killed the boy.

Why do we not hear from the Muslim over this atrocity?  Why are they always silent?

’s collective shame is that those who knew did not speak or at least made quite clear that what they were witnessing was wrong.

I somehow feel that the Islamic mind and soul knows no shame at these events that are been perpetrated again and again.  Is a soul without shame a soul?

I suggest that all Christians pray to the soul of little Adam for assistance in never forgetting his courage and sacrifice.  Perhaps this little child will some day be worthy of sainthood as a reminder of the real mortal sacrifices made by the faithful over the centuries.

Have a good and happy Christmas.

One month has passed since the massacre of Catholic Christians by Islamists in Our Lady of in . As Christians throughout the world celebrate Advent, which represents the awaiting of the birth of the Christ Child, word is spreading of Adam, a little Catholic boy who, at the tender age of three years old, stood up courageously to the Muslim aggressors in the midst of carnage.

Frances Cardinal George, the outgoing president of the United States Conference of Catholic Bishops, included Adam’s story in his final remarks to the USCCB in November:

Now, at the end of last month, on the vigil of the feast of All Saints, in the Syriac Catholic Cathedral of our Lady of Deliverance in the city of Baghdad, many dozens of Catholics were killed as they gathered for Mass. Two were priests: one was killed at the altar and the other as he left the confessional. They are joined in death with hundreds of others who have died for their faith in Christ since the current conflict began. An American Dominican Sister, a friend of a friend, has written from that country: “Waves of grief have enveloped their world, surging along the fault lines created in Iraqi society by the displacement of thousands of Iraq’s Christian minority who have fled what is clearly a growing genocidal threat…One survivor was asked by a reporter, what do you say to the terrorists? Through his tears he said, ‘We forgive you.’…Among the victims of this senseless tragedy was a little boy named Adam. Three-year-old Adam witnessed the horror of dozens of deaths, including that of his own parents. He wandered among the corpses and the blood, following the terrorists around and admonishing them, ‘enough, enough, enough.’ According to witnesses, this continued for two hours until Adam was himself murdered.” As bishops, as Americans, we cannot turn from this scene or allow the world to overlook it.

At three years old, children are beginning to learn from their parents about crossing the street safely and about being careful around strangers. It is at this age that children begin to ask “why” questions.

Little Adam surely knew, as is demonstrated by his actions, that there is no reasonable answer to the question “why” as his parents and others lay dead. It was clear to Adam that a horrible injustice had been done. Adam’s ability to reason was developed enough to recognize blatant injustice. His courage prompted him to act upon what reason had informed his conscience of.

This is critically important to recognize in the debate about Islam vs. Christianity.

Whether Baptist, Presbyterian, Methodist, Catholic or anywhere in between, Christianity universally teaches her members to be ‘as little children.’ It can be said, then, that Adam truly represents Christian fundamentalism. Adam is a perfect model of the true Christian. Islamic fundamentalism, on the other hand, is represented by those who murdered him.

The fact that this little Catholic boy, young though he was, used reason in such a courageous manner in the face of Islamic fundamentalists is also notably consistent with the message of the Vatican in regard to Islam and how Christians should deal with Muslims in daily life.

In his famous Regensburg speech, which prompted Muslim outrage, Pope Benedict XVI exposed Islam as a religion that does not accept reason. He also expressed at length the importance of reason in Christianity. Whenever and wherever Christians have been under the sword of Islam, such as in the case of Aasia Noreen(Asia Bibi), the Vatican has continually responded by calling upon Christians in “daily life” to be clear about the differences between Christianity and Islam, and to appeal to reason in discussions with individual Muslims.

Little Adam used his reason. “Enough, enough, enough,” he said, for two hours to the Islamists, before they murdered him. So it was that Adam, the Christian fundamentalist, fell under the “sword” of the Islamic fundamentalists. Nowhere is there a more clear example of Islam, the violent political/religous system vs. Christianity, where all are called to be “as little children” who must try to use reason with Muslim aggressors, than in Adam, a little Catholic boy who, in my humble opinion, will someday be known as St. Adam of Baghdad, the youngest saint of the Catholic Church.

Ahhh yes christianity as represented by what? The Catholics and Protestants in Ireland? Perhaps as represented by the Christians who came over here and made a herculean effort to kill the few survivors left from diseases? Maybe the christians represented by those who wore belt buckles with the phrase "Gott Mit Uns".
Seriously, if you are a gay, or jew, or "heathen", or just the wrong kind of Christian, the idea of christians being loving and kind is a cruel joke in most cases.

Seriously, one of the largest christian groups in the world is still the greatest sanctuary of pedophiles, and is pro life unless it comes to actually saving an actual living pregnant woman.

Religion holds up a standard and we are invited to see ourselves in that mirror.

Alternatively we have the present ethos of relativism which soon rationalizes all behavior as we observe lawyers for pedophiles attempt today. give them enough time.

At one time the great cultural crime was homosexuality. Remember that?