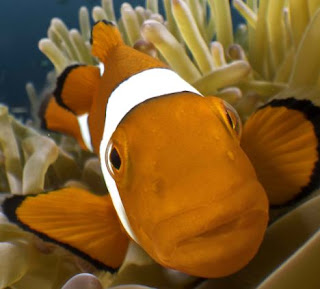 This is another item coming in from the global warming enthusiast and again we are attempting to take a giant leap of inference that is not based on any convincing work at all.  Note the comment from Marc Morano at the end.

What has been taking over the oceans is a deadly predator that has knocked out most of the top of the food chain allowing the lower orders like jelly fish to prosper.  Establishing proper harvest management globally will completely reverse this.

As mentioned, the ocean is not now acidic nor do I think it has ever been.  There is just too much limestone (calcium carbonate and magnesium sulphate) and its like available.

Jellyfish are taking over the oceans: Population surge as rising acidity of world's seas kills predators

Scientists say the number of jellyfish are on the rise thanks to the increasing acidity of the world’s oceans.

The warning comes in a new report into ocean acidification – an often overlooked side effect of burning fossil fuel.

Studies have shown that higher levels of carbon dioxide in the atmosphere doesn’t just trigger climate change but can make the oceans more acid. 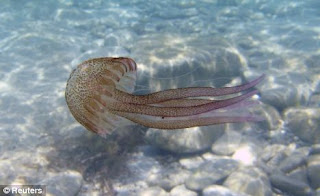 Since the start of the industrial revolution, acidity levels of the oceans have gone up 30 per cent, marine biologists say.

The new report, published by the UN Environment Programme during the Climate Change talks in Cancun, Mexico, warns that the acidification of oceans makes it harder for coral reefs and shellfish to form skeletons – threatening larger creatures that depend on them for food.

The decline in creatures with shells could trigger an explosion in jellyfish populations.

The report, written by Dr Carol Turley of , said: ‘Ocean acidification has also been tentatively linked to increased jellyfish numbers and changes in fish abundance.’

Jellyfish are immune to the effects of acidification. As other species decline, jellyfish will move in to fill the ecological niche.

Populations have boomed in the in recent years. Some marine scientists say the changing chemistry of the sea is to blame.

Studies have shown that clown fish – the species made famous by the movie Finding Nemo – find it harder to navigate through more acidic waters.

A Clownfish on the reef in , West Papua province, in . The fish is particularly susceptible to rising acidity

They are also less likely to avoid predators, and may activity seek them out, scientists have shown.

Test on laboratory fish have found that more acidic water rewires their brains, turning them into fish with a death wish.

The report says acidification may push overstressed oceans into disaster with far reaching consequences the billions of people who rely on fish as their main protein source.

The effects of extra carbon dioxide may be greater in colder waters such as the North Sea and north , the report says.

The damage to corals and shellfish could affect the whole food chain – hitting species such as salmon which feed on smaller shell building animals.

‘The basic chemistry of sea water is being altered on a scale unseen within fossil records over at least 20 million years,’ the report said.

Oceans are naturally alkaline – and had a pH level of about 8.2 in 1750. Since the industrial revolution, the acidity has increased by 30 per cent.

As the acid breaks down it makes sea water less alkaline and more acidic.

‘If we continue at this rate, the ocean pH will decline by a further 0.3 by the end of this century, an unprecedented 150 per cent increase in ocean acidity,’ the report states.

‘This rate of change has not been experienced for around 65 million years, since the dinosaurs became extinct.’

‘It is a new an emerging piece in the scientific jigsaw puzzle, but one that is triggering raising concern.’

The oceans are alkaline, not acid. The 30% number is something they pulled out of their posteriors. Corals and shellfish evolved when atmospheric CO2 levels were 10-20X higher than today. It is beyond ludicrous to claim that CO2 is reducing their ability to form shells. The chemical properties of Aragonite have not changed.
These people are determined to take control of world governance no matter how many lies they have to tell.
h/t to Marc Morano
UN BS Machine Continues To Crank In High Gear
Posted on December 6, 2010 by stevengoddard
Posted by arclein at 12:01 AM

Rising levels of CO2 have been proven to have no statistically significant effect on climate change. It also has no negative effect on our oceans.

This is just more of the same alarmist nonsense that the extreme environmental movement has been producing to serve their far left masters who control the purse strings to their grant funding.

There's nothing wrong with our atmosphere or our oceans other than pollution problems which we are and continue to be working to eliminate.

Increases in CO2 are caused by increasing temperatures which are caused primarily by the sun.

CO2 is not a pollutant.

Don't take my word for it. Check it out for yourself. A good place to start is the following brief article in Time Magazine from the mid 70's, in which the same scientists are claiming that our use of fossil fuels was PREVENTING the sun's heat from reaching the earth, and thereby causing it to get too cold.

This current global warming frenzy is the the 4th such panic that has occurred in the last hundred years.

"The whole aim of practical politics is to keep the populace alarmed (and hence clamorous to be led to safety) by menacing it with an endless series of hobgoblins, all of them imaginary." H. L. Mencken