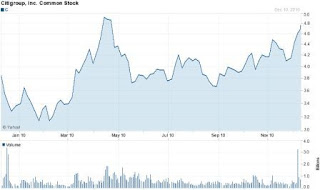 They just do not get it, do they?  A massive inventory of bad mortgages continues to choke the market.  That inventory is simply too large to absorb in the normal course of business and no one wants to accept that reality.  As I have posed, it is necessary to reset the process and cause that entire inventory to sell out once and for all.  This would immediately relaunch the building industry and put millions back to work.
The market may fall as suggested here, but I think that continues to be unlikely because the hit on bank capital is too large.  I think that the reverse will happen.  The banks already know what they are stuck with  and it is better to sell into a rising market.

After all if I have all available stock in my inventory and all buyers must come to me, it costs little to tape the prices higher.

Thus I am predicting the exact opposite.  The banks know today what their losses are and the only way out is to move prices upward.  Downward merely puts them under, while upward frees up huge amounts of new capital.  Yes, buy bank stocks.  Note that Citibank is on a clear uptrend out of the cellar.

home values are poised to drop by more than $1.7 trillion this year amid rising foreclosures and the expiration of homebuyer tax credits, said Zillow Inc., a closely held provider of home price data.

This year’s estimated decline, more than the $1.05 trillion drop in 2009, brings the loss since the June 2006 home-price peak to $9 trillion, the Seattle-based company said today in a statement.

The drop in home values pushed more buyers underwater, meaning they owe more on their mortgages than their homes are worth, Zillow said. The percentage of homeowners with so-called negative equity reached 23.2 percent in the third quarter, up from 21.8 percent at the end of 2009.

“With foreclosures near an all-time high in late 2010 and high rates of negative equity persisting, it does not appear that the first part of 2011 will bring much relief,” Stan Humphries, Zillow’s chief economist, said in the statement. “Government incentives can only temporarily hold back the tide.”

Housing demand has slumped since the start of the year as the government tax credit expired and unemployment hovers near 10 percent. Sales of existing homes in October fell to an annual pace of 4.43 million, compared with 5.98 million a year earlier and an annual average of 5.81 million over the past decade, the National Association of Realtors said Nov. 23. The median price was $170,500, down from $172,000 a year earlier.

More than $1 trillion of this year’s decline in home values occurred in the second half, Zillow said. Federal tax credits of as much as $8,000 for qualified first-time homebuyers and $6,500 for repeat buyers required a sales contract by April 30.

,
Only 31 metropolitan areas, or fewer than one-fourth of the 129 tracked by Zillow, had gains in home values this year. They include and .

Zillow’s report is similar to other forecasts for prolonged weakness in the housing market. U.S. home prices will decline as much as 11 percent by 2012 as weak demand and rising inventory extend the housing slump, Morgan Stanley said in a report yesterday.

Prices will be as much as 36 percent below their 2006 peak before finding a bottom, Morgan Stanley analysts led by Oliver Chang wrote. Sales will stay “depressed” through next year amid tightened lending standards, they said.

As many as 8 million homes are in default or foreclosure and may be offered for sale, known as shadow inventory, according to Morgan Stanley. The looming supply will combine with tight credit and questions about housing-finance regulation to reduce prices 6 percent to 11 percent from current levels, the analysts said.