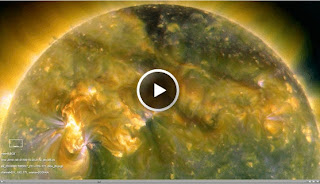 Now that we are able to look closely, we are finding out just now active the sun can be.  No one imagined this or that such an event would go unnoticed on Earth but from our observation gear now in place.

The importance of this eruption is not so much the event itself however unprecedented as the discovery of direct linkage on a global basis for the large events.  This completely resets our models and general thinking.

I recall when we expected little from the sun in new data.  Now we are looking at a variable star up close in 360 degrees and getting all the action we could ever desire.

The miracle is how well shielded we are and have been for billions of years.

Dec. 13, 2010:  On August 1, 2010, an entire hemisphere of the sun erupted. Filaments of magnetism snapped and exploded, shock waves raced across the stellar surface, billion-ton clouds of hot gas billowed into space. Astronomers knew they had witnessed something big.

It was so big, it may have shattered old ideas about solar activity.

"The August 1st event really opened our eyes," says Karel Schrijver of Lockheed Martin’s Solar and Astrophysics Lab in , CA. "We see that solar storms can be global events, playing out on scales we scarcely imagined before."

For the past three months, Schrijver has been working with fellow Lockheed-Martin solar physicist Alan Title to understand what happened during the "Great Eruption." They had plenty of data: The event was recorded in unprecedented detail by NASA's Solar Dynamics Observatory and twin STEREO spacecraft. With several colleagues present to offer commentary, they outlined their findings at a press conference today at the American Geophysical Union meeting in .

Explosions on the sun are not localized or isolated events, they announced. Instead, solar activity is interconnected by magnetism over breathtaking distances. Solar flares, tsunamis, coronal mass ejections--they can go off all at once, hundreds of thousands of miles apart, in a dizzyingly-complex concert of mayhem.

"To predict eruptions we can no longer focus on the magnetic fields of isolated active regions," says Title, "we have to know the surface magnetic field of practically the entire sun."
This revelation increases the work load for space weather forecasters, but it also increases the potential accuracy of their forecasts.

"The whole-sun approach could lead to breakthroughs in predicting solar activity," commented Rodney Viereck of NOAA's Space Weather Prediction Center in Boulder, CO. "This in turn would provide improved forecasts to our customers such as electric power grid operators and commercial airlines, who could take action to protect their systems and ensure the safety of passengers and crew."

In a paper they prepared for the Journal of Geophysical Research (JGR), Schrijver and Title broke down the Great Eruption into more than a dozen significant shock waves, flares, filament eruptions, and CMEs spanning 180 degrees of solar longitude and 28 hours of time. At first it seemed to be a cacophony of disorder until they plotted the events on a map of the sun's magnetic field.

Title describes the ! moment: "We saw that all the events of substantial coronal activity were connected by a wide-ranging system of separatrices, separators, and quasi-separatrix layers." A "separatrix" is a magnetic fault zone where small changes in surrounding plasma currents can set off big electromagnetic storms. 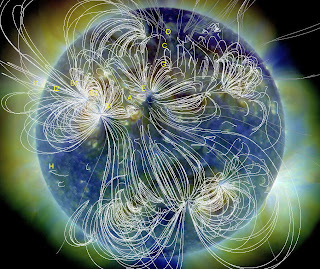 Locations of key events are labeled in this extreme ultraviolet image of the sun, obtained by the Solar Dynamics Observatory during the Great Eruption of August 1st. White lines trace the sun's magnetic field. Credit: K Schrijver & A. Title. [larger image]

Researchers have long suspected this kind of magnetic connection was possible. "The notion of 'sympathetic' flares goes back at least three quarters of a century," they wrote in their JGR paper. Sometimes observers would see flares going off one after another--like popcorn--but it was impossible to prove a link between them. Arguments in favor of cause and effect were statistical and often full of doubt.

"For this kind of work, SDO and STEREO are game-changers," says Lika Guhathakurta, NASA's Living with a Star Program Scientist. "Together, the three spacecraft monitor 97% of the sun, allowing researchers to see connections that they could only guess at in the past."

To wit, barely two-thirds of the August event was visible from Earth, yet all of it could be seen by the SDO-STEREO fleet. Moreover, SDO's measurements of the sun's magnetic field revealed direct connections between the various components of the Great Eruption—no statistics required.

Much remains to be done. "We're still sorting out cause and effect," says Schrijver. "Was the event one big chain reaction, in which one eruption triggered another--bang, bang, bang--in sequence? Or did everything go off together as a consequence of some greater change in the sun's global magnetic field?"

Further analysis may yet reveal the underlying trigger; for now, the team is still wrapping their minds around the global character of solar activity. One commentator recalled the old adage of three blind men describing an elephant--one by feeling the trunk, one by holding the tail, and another by sniffing a toenail. Studying the sun one sunspot at a time may be just as limiting.

"Not all eruptions are going to be global," notes Guhathakurta. "But the global character of solar activity can no longer be ignored."

As if the sun wasn't big enough already….
Posted by arclein at 12:01 AM

keeping an eye on the entire solar magnetic activity can help a lot.the proper magnetic mapping and constant data recording of the solar atmosphere is very important.the sun is too big to ignore the surface solar activities.