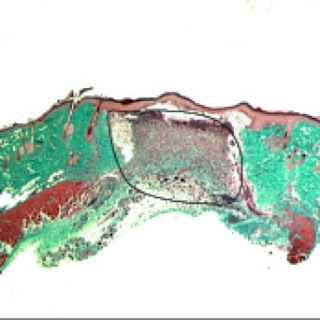 They do not have it all figured out, but it appears that it has become possible to manage natural scarring to the extent of outright eliminating it.

At worst, this should produce a treatment that will hugely reduce what scarring that we do get and may even help reduce heart damage in heart attack victims who suffer from scarring that lowers performance after the attack.

This should also naturally lower unnecessary inflammation and actually speed healing in injuries also.  If we can also add biologically available oxygen while we are at it, the whole process may be hugely sped up.

So far it all seems to be quite a simple procedure and we may just be that lucky.

Small sugar fragments can set off a signal cascade that increases inflammation and scar formation. A small peptide can block this process and allow scar-free healing

Most people have one somewhere: a nasty scar from an old injury. It typically causes no serious harm, but can be unsightly. Scar-reducing creams and other dermatological procedures can help, but no one has known how to prevent scarring in the first place. Now scientists have discovered that the key to scar-free wound healing could involve blocking the action of a common sugar.

Hyaluronan is a long, gooey sugar discovered in the 1970s. Researchers long thought that it was just another component of the extracellular slime that surrounds all cells. Since then, hyaluronan has been shown to be a significant player in heart development and tumor metastasis.

Scientists also have discovered that developing fetuses and newborns have very high levels of the sugar, compared with teens and adults. And, the former group can recover from surgery without major scarring. This led Cornelia Tölg and Eva Turley, both of the in , and colleagues to hypothesize that high levels of hyaluronan helped prevent scar tissue formation.

As humans age, levels of intact hyaluronan drop dramatically. Fragments of hyaluronan increase as the body breaks down the intact versions. Tölg and colleagues found that although intact hyaluronan promotes scar-free wound healing, the hyaluronan fragments spur the formation of excess scar tissue.

The researchers manipulated the wound repair process in rats by giving them a small protein, called peptide 15-1. The peptide prevents the hyaluronan fragments from binding to a receptor on skin cells. Rats with wounds treated with the peptide had significantly less scarring than control rodents. Skin cells on the injured rats treated with it also regenerated similar to human embryos and newborns.

When not blocked by peptide 15-1, hyaluronan fragments bind to skin cell receptors and set off a signaling cascade that increases inflammation at the site of the injury. Inflammation calls more immune cells to the wound to help fight infection, along with collagen, a fibrous protein, to help seal the wound shut. The excess collagen and rapidity with which inflammation drives skin cells to divide to keep bacteria out ultimately causes scarring. The researchers presented their results December 12 at the American Society for Cell Biology's 50th annual conference in .

A fetus is bathed in a sterile fluid, Turley says, and therefore does not need to close wounds to prevent infection. In the germ-filled world, however, preventing infection is a matter of life and death. "There is a lot of evolutionary pressure to heal wounds really quickly," she says. "We heal at the expense of tissue architecture."

Peptide 15-1 seems to block the inflammatory processes by preventing immune cells from infiltrating the wound. Yet treatment with this peptide did not increase the odds of infection in the lab or noticeably slow the rate of wound healing, Tölg says.

"It's a very significant work," says Vinata Lokeshwar, a cell biologist at the of Medicine. "If they found a peptide that blocks the [receptor] activity, it has implications beyond inflammation. It could be used for cancer, or even in the cosmetics industry." Many cancers have high levels of hyaluronan, which is linked to tumor metastasis.

The researchers still do not understand why intact and fragmented versions of hyaluronan have such different effects on scar formation. Tölg and Turley think that the size differences between the two molecules might help explain their disparate effects. "It's an odd thing to have information encoded in size," Turley says. The large, intact hyaluronan molecules might not be able to bind very well to the skin cell receptors used by the hyaluronan fragments, she says.

Nevertheless, the discovery is significant—even just one treatment by peptide 15-1 may make scarring a thing of the past, Tölg and Turley conclude.
Posted by arclein at 12:01 AM