Self Assembly of 3D Nano Structures

This is another advance in nano engineering from a two dimensional surface acting as a substrate.  The possibilities become countless as do the potentialities.

In the past several years we have witnessed nano capabilities steadily advance one neat trick at a time.  I can think of little more exciting these days than attending a conference with all the players doing presentations.  Everyone must be trying to advance new methods and the level of intellectual speculation must be huge.

It is interesting that they chose to use C60 or buckyballs for this trick.

Self Assembly of three dimensional structures from molecular building blocks


The University of Nottingham has achieved a world first to provide building blocks for new nano devices.

Scientists at The have made a major breakthrough that could help shape the future of nanotechnology, by demonstrating for the first time that 3-D molecular structures can be built on a surface.


The discovery could prove a significant step forward towards the development of new nano devices such as cutting-edge optical and electronic technologies and even molecular computers.


In a paper published in the prestigious journal Nature Chemistry, the team of chemists and physicists at have shown that by introducing a ‘guest’ molecule they can build molecules upwards from a surface rather than just 2-D formations previously achieved.


The new process involved introducing a guest molecule — in this case a ‘buckyball’ or C60 — on to a surface patterned by an array of tetracarboxylic acid molecules. The spherical shape of the buckyballs means they sit above the surface of the molecule and encourage other molecules to form around them. It offers scientists a completely new and controlled way of building up additional layers on the surface of the molecule. 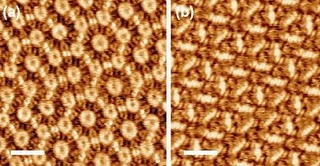 STM images of different regions of a single layer TPTC network, all scale bars are 23A. (23 Angstroms, 2.3 nanometers)

Self-assembly of planar molecules on a surface can result in the formation of a wide variety of close-packed or porous structures. Two-dimensional porous arrays provide host sites for trapping guest species of suitable size. Here we show that a non-planar guest species (C60) can play a more complex role by promoting the growth of a second layer of host molecules (p-terphenyl-3,5,3″,5″-tetracarboxylic acid) above and parallel to the surface so that self-assembly is extended into the third dimension. The addition of guest molecules and the formation of the second layer are co-dependent. Adding a planar guest (coronene) can displace the C60 and cause reversion to a monolayer arrangement. The system provides an example of a reversible transformation between a planar and a non-planar supramolecular network, an important step towards the controlled self-assembly of functional, three-dimensional, surface-based supramolecular architectures.


11 pages of supplemental information
The research paper is the second significant breakthrough to be reported by the team in recent weeks. In September, a paper in Nature Communications revealed they had demonstrated for the first time the way in which an irregularly shaped molecule is adsorbed on a surface. It represents a step towards being able to harness the potential of these molecules, which have extremely useful properties, by organising them to form structures. They could offer a way of building new data storage devices that are orders of magnitude smaller than their existing silicon-based counterparts.