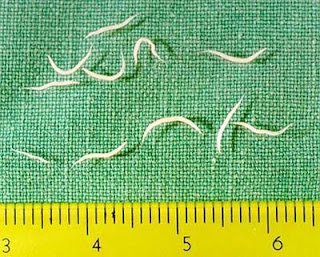 This protocol is a little unexpected but still makes a lot of sense.  We have evolved to manage a parasite load that is at most annoying but not necessarily fatal.  That active mucous discharge is part of this system seems likely and that a heavy mucous load also manages other inflammatory conditions makes sense.

Thus taking on such a load is possibly a good idea as a way to restore health to the affected intestine.  Once resolved, it is easily disposed of and one hopes that the condition itself never returns.

Of course, we are unclear why the issue arises in the first place, but it appears likely that dietary care may be preventative once it is fully cured through such a protocol.

I can hardly wait for the medical profession to advise getting worms as a xcure.

“The idea for treating colitis with worms is not new, but how this therapy might work remains unclear,” says the study’s senior corresponding author, P'ng Loke, PhD, assistant professor of medical parasitology at . “Our findings suggest that infection with this particular parasite increases or restores mucus production in the colon, providing symptomatic relief.”


A chronic disease, ulcerative colitis is characterized by open sores or ulcers in the lining of the colon. The disease is estimated to affect 600,000 Americans, according to the Crohn’s & Colitis Foundation of , and the most common symptoms are abdominal pain and bloody diarrhea. The cause is unknown, but studies points to defects in immune regulation. Disruption of mucus production is often associated with severe symptoms.

Colitis is common in North America and , where helminth (parasitic worm) infections are rare. Conversely, the disease is rare in Asia, Africa, and , where helminth infections are endemic, leading researchers to hypothesize that the worms offer protection against this inflammatory bowel disease. In animal models of autoimmunity these worms have suppressed inflammation, and clinical trials indicate that helminth therapy can be beneficial in relieving symptoms of inflammatory bowel diseases.


To gain a better understanding of how such therapy works, Dr. Loke and his colleagues analyzed a series of blood and tissue samples taken from a 34-year-old man living in California with ulcerative colitis who ingested Trichuris trichiura eggs (a roundworm that infects the lower intestine) after having researched the scientific literature. After several months, his condition improved dramatically and he remained in remission for almost three years. A subsequent cycle of self-treatment with the worm eggs achieved similar results.

Tissues samples taken when the patient had active disease were found to contain high numbers of a type of immune cell (CD4+ T cells) that produces an inflammatory protein called interleukin-17. Tissue samples taken after exposure to the worms, when the disease was in remission, contained an abundance of T cells that produce interleukin-22 (IL-22), a protein important in mucosal healing. To expel the worm, the researchers note, the immune system appears to activate specialized cells that increase mucous production in the entire colon.


“In essence, the worms trigger a big sneeze of the gut, which may have a beneficial side effect for ulcerative colitis,” says Dr. Loke, who does not advocate helminth therapy. “The problem is that these worms themselves can cause harm and damage the gut. The individual in this study is lucky to have responded so well, but for other people the worm infection may exacerbate bowel inflammation,” he says.

It is impossible right now to predict who might be helped and who might be harmed by infection with these worms. Studies are underway, adds Dr. Loke, using a worm that infects pigs (T. suis) to treat colitis, which should be less risky.

NYU Langone Medical Center is one of the nation's premier centers of excellence in healthcare, biomedical research, and medical education. For over 170 years, NYU physicians and researchers have made countless contributions to the practice and science of health care. Today the Medical Center consists of NYU School of Medicine, including the Smilow Research Center, the Skirball Institute of Biomolecular Medicine, and the Sackler Institute of Graduate Biomedical Sciences; and the NYU Hospitals Center, including Tisch Hospital, a 705-bed acute-care general hospital, Rusk Institute of Rehabilitation Medicine, the first and largest facility of its kind, and NYU Hospital for Joint Diseases, a leader in musculoskeletal care, a Clinical Cancer Center and numerous ambulatory sites.

I was also able to achieve remission from Crohn's after getting hookworms and whipworms. You can follow my progress here: http://www.facebook.com/Helminthic.Therapy?v=wall
Also, there's a wiki page that contains a ton of information on this topic, including helminthic therapy providers: http://opensourcehelminththerapy.org
A whole lot of research articles on helminthic therapy can be found here: http://goo.gl/CFsY