Why is oat milk so popular, and what’s it actually like? 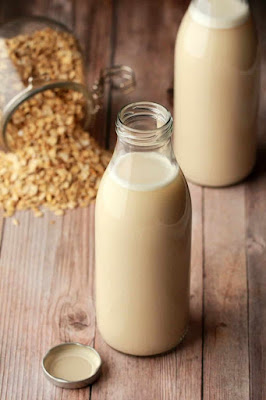 This came as a complete surprise and it is extremely important.  First off, it tastes fine and clearly does the job.  We now have a superior veggie milk product that is better than soy milk or almond milk.  It is also able to challenge dairy as well.

It is my personal opinion that raw dairy milk needs to become a thing and that all surplus dairy be fed into the cheese and butter industries as a base supply of protein and fat.  Most of our butter should be turned into ghee but that will take years of change.

Now we can displace drinking dairy with oat based milk and that is huge.  Blending it with pasteurized dairy could also be useful in possibly improving taste.  .


Why is oat milk so popular, and what’s it actually like?


Janelle Nanos explains the rise of oat milk, and people in the Globe office try it out. (Photo: Suzanne Kreiter, Video: Mark Gartsbeyn)

WILMINGTON — Last June, HP Hood executives issued a challenge to food scientists at the 173-year-old dairy company. Could they bring an oat milk to market? Now?

Cow’s milk consumption in the United States had fallen precipitously in the last decade, as consumers, driven by dietary restrictions and environmental concerns, increasingly reached for milk alternatives. Oat milk, a Swedish novelty, was the latest beige beverage being poured into lattes in coffeehouses across the country.

Hood executives wanted to be the first to deliver an oat milk to middle America. But formulating the drink quickly wasn’t easy: It had to mix well with coffee and baked goods and still taste good on its own.

“You can’t necessarily milk an oat,” Fatima Disu, a food scientist at Hood, said in an interview, raising her fingers and pretending to tug the udders of a tiny oat grain.

But in January, after a six-month sprint, the company began shipping four varieties of its Planet Oatmilk to national supermarket chains. It’s Hood’s first standalone plant-based brand, and at $3.99 per carton, it is no haute milk, like the artisanal pea, flax, or hemp varieties cropping up in natural food stores. This is the dairy-free nectar of the proletariat — free of all major allergens, low in added sugar, with a richer, creamier taste than other plant-based “alt-milks.” It’s so popular that Amazon can’t keep it in stock, company executives say.

That one of the nation’s major dairy producers considered it a coup to introduce an oat milk to America was yet another sign that the traditional milk market is at a crossroads. Americans bought $16.16 billion of cow’s milk in the year ending in late March 2015, the market research firm Nielsen found, but that number dropped to $12.13 billion at the same time this past year. Meanwhile, sales of alternative milks were up 8 percent year-over-year, as of January of this year, hitting $1.7 billion, according to Nielsen data.

Earlier this month, Dean Foods, the nation’s largest milk producer, which owns Garelick Farms, distributes Organic Valley, and sells the brand of Friendly’s ice cream cakes and cartons sold in grocery stores, among other brands, reported another round of deep losses. Its stock has lost 60 percent of its value this year. In May 2018, it closed the Lynn manufacturing plant of Garelick Farm because of declining sales.

The ascendance of plant-based “milks” has led the dairy lobby to wage a battle over the very definition of milk. The fight, which is now playing out in Washington, pits smaller dairy farmers against some of the country’s largest milk producers, which have been increasingly looking to work both ends of the dairy aisle.

“There is no such thing as oat milk,” declared Alan Bjerga, the senior vice president of communications at the National Milk Producers Federation, which represents dairy milk cooperatives. “There is only one milk, and no alternative compares.”

Defining milk as the product of a lactating mammal isn’t the only semantic squabble between the producers of traditional animal products and their plant-based doppelgängers. The beef industry is arguing the word “meat” shouldn’t be used describe plant-based patties produced by the Impossible Burger and Beyond Meat, and there have been efforts to reclassify exactly what can be called an egg.

The Dairy Pride Act, which was reintroduced in the Senate in March, would require that “non-dairy products made from nuts, seeds, plants, and algae no longer be confusingly labeled with dairy terms like milk, yogurt, and cheese.” Some dairy industry advocates argue there are genuine health concerns at stake: Consumers may assume plant-based milks have the same nutritional profile as dairy milk, and that has resulted in dangerous nutritional deficiencies, particularly in young children.

“Every industry wants its own product to be clearly defined by its merits; that’s all milk is asking for,” Bjerga said.

But for Hood and other major dairy producers, quibbling over the “milk” label is no longer a battle worth fighting. Oat milk wasn’t even Hood’s first foray into non-dairy beverages; the company partnered with the Blue Diamond almond collective to produce Almond Breeze in its facilities a decade ago. Several other major dairy brands, including Dean Foods and Danone North America, have invested in or launched their own plant-based brands.

As cow’s milk sales have dropped, plant-based beverages are the “only place we’re seeing growth,” said Darren Seifer, a food and beverage analyst for NPD Group.

That’s why big dairy makers took notice when Oatly, a 25-year-old Swedish brand, first made inroads into the United States in late 2016. The beverage is made by taking a base of ground-up oats and water and treating it with heat and enzymes, which help break down the husk of the oat. When strained, it creates a creamy oat base that retains a bit of sweetness. Its creation came because Sweden’s rainy climate doesn’t support many traditional crops.

“You couldn’t grow an almond in Sweden if you tried,” said Mike Messersmith, the general manager of the company’s US arm. Because it can foam like traditional cow’s milk in coffee drinks, it quickly cultivated a cult-like status. In Boston, baristas are having a hard time keeping cartons of oat milk on hand (though few seem to have discovered Hood’s Planet Oat brand).

“We’re going through it much more than almond,” she said. But her milk distributor can’t seem to get a hold of cartons of Oatly.

And Chris Marinuzzi, chief barista at Ogawa Coffee shop on Milk Street, said he prefers oat milk to other plant-based milks because it steams well and makes the most attractive latte art.

“It tastes really good; it’s my personal favorite,” he said. He, too, has had trouble keeping oat milk in stock, now that his customers are using an app created by Oatly to seek out the elusive beverage.

“One customer recently came in, and said ‘I found you on Oatfinder,”’ he said. “But it was on a day we were out of oat milk, so she was really upset.”

In the wake of Oatly’s arrival, other beverage giants are rolling out their own versions. PepsiCo, owner of Quaker Oats, unveiled an “oat beverage” earlier this year, and Danone’s plant-based brand, Silk, released “Oat Yeah” in January.

Even Ocean Spray is wading into the fray. The 90-year-old cranberry growing cooperative will soon launch a line of single-serve oat milks, fortified with herbal blends, as part of its new Atoka line of wellness beverages and supplements.