Mexico Has Its Own Migrant Crisis — and the President Isn't Happy 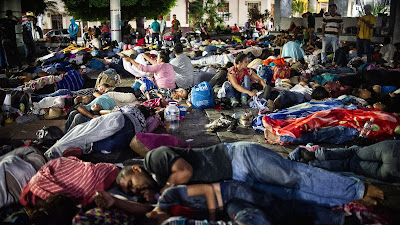 The huge corollary to the USA migrant problem has always been Mexico.  Now, of course, they are no longer passing through so easily and must face the prospect of staying anyway.  Thus Mexico now has its own problem without the absorption ability.

I do suspect that this whole movement was contrived by activists to the extent of providing travel cash in particular.  Making the border impassable will discourage further adventurism.  We can see that the window is closing.


Europe initially failed to act when this happened there and they are now struggling with the real fallout.

Mexico tried to skate, but are now caught.  These folks mu8st be forced back.
.


Mexico Has Its Own Migrant Crisis — and the President Isn't Happy

Central American migrants at a park in Hidalgo in Tapachula, Chiapas state, Mexico.

President López Obrador is cracking down on a fast-growing refugee influx from the south.

The massive migrant caravan of some 7,000 Central Americans that marched through Mexico to the United States border made headlines around the world in October. Yet as President Donald Trump continues to grapple with the tide of refugees trying to enter and stay in the U.S., another migrant crisis is brewing south of its borders.

Mexico faces unprecedented levels of migrants coming from troubled nations in the region and beyond. Thousands aren’t chasing the American Dream, though; they want to stay in Mexico. The nation’s immigration system is overwhelmed in the south, where the vast majority of migrants cross into Mexico illegally and apply for asylum.

Despite the rhetoric that welcomed migrants at the start of the year, Mexican President Andrés Manuel López Obrador’s administration has stepped back from handing out humanitarian visas and is placing more restrictions on migrants, and upping detentions and deportations. “The situation is extremely serious, and we don’t know what to do anymore,” says Andrés Ramírez, head of Mexico’s refugee agency COMAR. In fact, the organization estimates that …

And that’s a conservative estimate, according to Ramírez. In the southern state of Chiapas, where the majority of migrants cross into Mexico, COMAR has received more than 11,200 asylum applications so far this year, compared with 16,600 throughout 2018. Across the whole of Mexico, 18,000 people applied between January and April, compared with a total of nearly 30,000 for the whole of last year, according to figures supplied by the agency. The vast majority of migrants have applied in Chiapas.

Tapachula, a border city in Chiapas, is on the front line of the impending crisis. Just half an hour’s drive from the Suchiate River, where hundreds if not thousands of undocumented migrants cross into Mexico every day, improvised camps have sprung up in the city’s central plaza as well as outside the few migrant processing offices that there are. Children in diapers sleep on the sidewalks in the tropical heat, day and night. The few migrant shelters that exist are full. The resulting trash and mess annoy locals, and public stairwells have been turned into latrines. Some residents and business owners have had enough.

“When the first caravan came, the whole town was dedicated to helping them — people were handing out food and clothes. Now no one wants them here,” says Marta Fourzale, owner of a local hotel and a lifelong resident of Tapachula.

This border town has for decades seen a slow but steady stream of migrants from beleaguered Central American countries such as Honduras, El Salvador and Guatemala. The caravan in October last year was unprecedented, but most of those migrants were just passing through, abiding by the idea of safety in numbers. But people kept coming, in smaller groups. Today, not only are there Central Americans in the queues for attention at COMAR but also residents of countries such as India and Angola, Eritrea, Ghana, Cameroon and other African nations.

The lack of resources and infrastructure being provided by agencies like COMAR is making the migrants seem like a public nuisance to locals. And yet the federal government is making things worse.

López Obrador has cut COMAR’s budget by 20 percent and is insisting that the majority of migrants remain in the country’s southern states, some of the country’s most impoverished. A special visitor’s visa limits them from going any farther into Mexico. Yet it is from these states that historically hundreds of thousands of Mexicans have migrated to the U.S. Why? Because there are no jobs.

Local towns have started to reject migrant groups wanting to pass through, and municipal governments — tackling their own budget limitations — are stoking xenophobia in an effort to keep them out. In the town of Huixtla, one migrant group was recently barred from entering, and local authorities advised people to close their businesses and stay indoors.

The statements made by López Obrador when he took power in December, promising that Mexico would welcome migrants, were in contrast with Trump’s. These could have helped prompt migrants from so many different parts of the world to move toward Mexico. But now the nation is confronting an influx of migrants the likes of which it has never seen.

Ramírez says, “As more people arrive, the situation and discontent is going to get worse.”
Posted by arclein at 12:00 AM