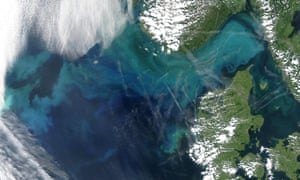 Lost at the bottom of the North Sea almost eight millennia ago, a vast land area between England and southern Scandinavia which was home to thousands of stone age settlers is about to be rediscovered.

Marine experts, scientists and archaeologists have spent the past 15 years meticulously mapping thousands of kilometres under water in the hope of unearthing lost prehistoric tribes.

On Wednesday a crew of British and Belgian scientists set off on their voyage across the North Sea to reconstruct the ancient Mesolithic landscape hidden beneath the waves for 7,500 years. The area was submerged when thousands of cubic miles of sub-Arctic ice started to melt and sea levels began to rise.

Sign up for Lab Notes - the Guardian's weekly science update

Read more The ancient country, known as Doggerland, which could once have had great plains with rich soils, formed an important land bridge between Britain and northern Europe. It was long believed to have been hit by catastrophic flooding.

Using seabed mapping data the team plans to produce a 3D chart revealing the rivers, lakes, hills and coastlines of the country. Specialist survey ships will take core sediment samples from selected areas to extract millions of fragments of DNA from the buried plants and animals.

Prof Vincent Gaffney, from the University of Bradford’s school of archaeological and forensic sciences, said: “If this is successful it will be the first time anybody will have produced such evidence for settlements in the deep waters of the North Sea. This will be a real first. That would be new knowledge of what is really a lost continent.”

Brown Bank location Bradford scientists will join Belgian experts onboard RV Belgica for the 11-day expedition in the Brown Bank area of the southern North Sea.

Gaffney said they were praying for stable weather and good luck. “We can’t walk those fields looking for pottery or stone fragments, we can’t dig. We’re going to drop ‘grabs’, or do very small-scale dredges, to see if we can find these stones or tools, to give us a clue as to what is there. We are talking about an area that is the size of a modern European country. And we know almost nothing about it.

“We’ve been preparing for this for a long time and are now on the edge of achieving it. This is the first real chance we’ve had. We don’t know if we will succeed … We are so close – we just need a tiny bit of luck to get to the right spot.”

Until sea levels rose at the end of the last ice age, between 8,000 and 10,000 years ago, an area of land connected Britain to Scandinavia and the continent.

In previous studies funded by the European Research Council, the Lost Frontiers team mapped the Doggerland region, which is about the size of the Netherlands. The team could identify the location of river valleys, marshlands, hills and even white cliffs, but was unable to find evidence of human activity.

Gaffney said his focus was on the period between 11,000 BCE and 5,000 BCE, the middle stone age, in what was “the last great period of the hunter gatherer”.

He added: “Vast areas of the North Sea were dry land and inhabited. Then sea levels rose, and pretty much everything about the world changed in this period. The most pleasant places to live would have been on the great plains – which are now out at sea. This is where they would have wanted to be, not in the hills. But it’s all been lost.” 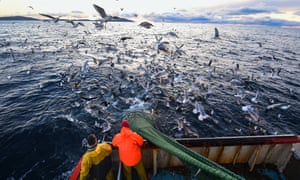 Calling it a civilization is a bit of a stretch. We should be able to confirm cattle culture, fishing culture and possibly grain culture as well.  Most important though will be the nature of local forests here.
Forest restoration is a global priority and we need to confirm historic regimes anyway.
It is possible to imagine building polders out into the North Sea although most of it is 90 meters deep which is far beyond easy use of dikes.  This does suggest real subsidence took place as well as flooding from a rising sea in the recent past during the Bronze Age... .
Reconstruction' begins of stone age lands lost to North Sea
North Sea fishing crews have discovered archaeological artefacts in their nets. Photograph: Jeff J Mitchell/Getty Images Archaeological finds made by fishermen over the past century suggest there was a sand ridge east of Great Yarmouth, known as the Brown Bank, which could have been the location of a settlement.


Gaffney said the project hoped to reveal, for the first time, the culture and lifestyle of the prehistoric Britons who flourished there for 6,000 years.

The team plans to recover ancient pollen, plant and animal DNA, and use high-definition survey techniques to accurately reveal what the landscape looked like.

“It’s a needle in a haystack when you’re dropping a 1 metre bucket into a landscape the size of Holland,” Gaffney said.

It is understood the ancient civilisation originally covered about 260,000 sq km (100,000 sq miles). However, after the ice age ended coastal zones became increasingly vulnerable to catastrophic flooding and entire civilisations would have been lost.

• This article was amended on 10 May 2019. Doggerland is about the size of the Netherlands, not Holland as stated in an earlier version.
Posted by arclein at 12:00 AM