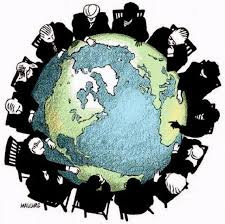 As i write this most of those MP's have lost their office.  We have a clear global movement that is conservative, it is popular and it is a restoration.  Better yet, it is not part of a cultural militarisation that has exploited all these tendencies in the past.

What most have completely missed is that our global culture has completely demilitarized over the past post war era and particularly in the post Cold war era.  The draft today only exists in clearly threatened countries and is then mostly an anomaly.

Elites still think in terms of armies and will for a while until poverty is ended.  What we will now assemble is a new concept of global governance that will strengthen local governance in particular to support local traditions.  This is worthy and will never generate conflict.

In fact we are slowly transitioning to a post conflict world largely protected by USA military dominance.

What is happening is GLOBAL and the ultimate resolution will be GLOBAL even though we have problems imagining that resolution..  Curiously, the USA constitution actually dealt with similar problems with both success and failure and that is worth noting.  The EU badly needs an executive branch with an elected president to counter the EU bureaucracy and to preserve the benefits.  Brexit would never have happened otherwise. We also need to create Nation Cities to allow national independence without unnecessary conflict. . ..

They get it and they don’t get it. Panicking parliamentarians are gazing upon their poll numbers in free fall with horror and disbelief. Is it really possible that the Conservative and Labour parties might be collapsing as much as the polls suggest? Yes, it is most certainly possible.


Might the Conservative party now be out of power for a generation or even split apart and disintegrate altogether? Yes it might. Could the entire political system now be entering a profound realignment? Yes it could. Can Nigel Farage’s Brexit party really be erupting from absolutely nowhere to take the country by storm? You bet it can.

And that’s the point, isn’t it. These MPs can’t believe the Farage phenomenon for exactly the same reason they can’t believe that the country not only voted to leave the EU but that it’s getting more fired up about this by the day. They wrote off all who voted for Brexit as thick, racist, insular xenophobes. They are now trying desperately – and disgustingly – to smear Farage and various Brexit party candidates as monsters who are utterly beyond the political and moral pale.

But just as with Project Fear (and like the parallel attempt across the pond to oust President Trump by foul and even fouler means), the more they do so the more they find to their horror and bafflement that public support for Farage’s party – and not just for Brexit, but no-deal Brexit – simply increases.

The reason for this epic failure of comprehension is that they still can’t understand that the main reason why people voted for Brexit was to restore the UK as an independent, self-governing sovereign nation. It was, as Brexit voters repeated over and over again, all about “taking back control”. It was all about democracy.

And so the coup against democracy mounted by Remainer MPs – the tearing up of parliamentary rules and constitutional conventions, the disregard of those MPs’ election promises to honour the 2016 referendum result, the casual junking of the law they themselves passed to do so and their implacable refusal to honour that law’s commitment to deliver Brexit if necessary without a withdrawal deal — all this has enraged the British public beyond measure.

They have concluded, quite rightly, that all involved in this wretched, despicable debacle – including some prominent Brexiteers who displayed a total absence of intellectual integrity and basic courage by voting for Mrs May’s rotten Brexit-in-name-only-Remain-by-stealth deal – represent a political class that is utterly broken. There is only one issue now that matters: exiting the EU. And the Brexit party is the only one unequivocally promising to do just that.

But these MPs, both Remainers and the faithless or muddled Brexiteers, still don’t get this. They still can’t understand the gravity of what they have collectively done.

They still don’t understand why public anger is as profound as it is.

They still don’t understand that the UK either leaves or remains under EU control, and that any “compromise” is merely a dishonestly disguised form of Remain.

They are still refusing to face the fact that, given continued EU intransigence, Brexit will only be delivered by leaving with no deal.

As Mrs May continues to pursue her 53 shades of Brexit betrayal, more and more absurdly preening Tory MPs are throwing their hats into the ring to succeed her – and yet they are still unwilling to bring about the vacancy.

So here’s what should happen.

The Tory party should change its rules and remove Mrs May forthwith.

A consistent, principled and brave Brexiteer – someone who did not vote for Mrs May’s deal – should be installed as a caretaker prime minster with the sole brief of delivering Brexit.

That new prime minister should announce that Britain is now leaving with no withdrawal deal; that Britain’s door will always be open to the EU if it wants to propose a long-term free-trade deal, but absent that the UK will trade under WTO rules.

If MPs continue to oppose leaving with no deal, the new PM should dissolve parliament and call a general election. This would be fought on the issue of democracy and honouring the majority wish of the people.

Yes, there would be a risk of the the Corbynised Labour party coming to power. But Britain’s democratic future should not be held hostage by Jeremy Corbyn.

For the issue of our time is no longer Tory v Labour. It is rather the essence of the compact that a democratic society makes between government and governed – a compact that now lies smashed. The challenge to Labour is no longer just about its odious or lunatic policies for the future. It is about the damage it has already helped the Tories do to the country’s democratic fabric.

Fought on that basis by a credible Brexiteer party leader, this could galvanise the nation by tapping into the passion now on such dramatic display – the deep desire for democracy and political promise-keeping, and the corresponding revulsion against those who have so cynically trampled all this under foot and shown such utter contempt for the people they have forgotten they serve.
Posted by arclein at 12:00 AM